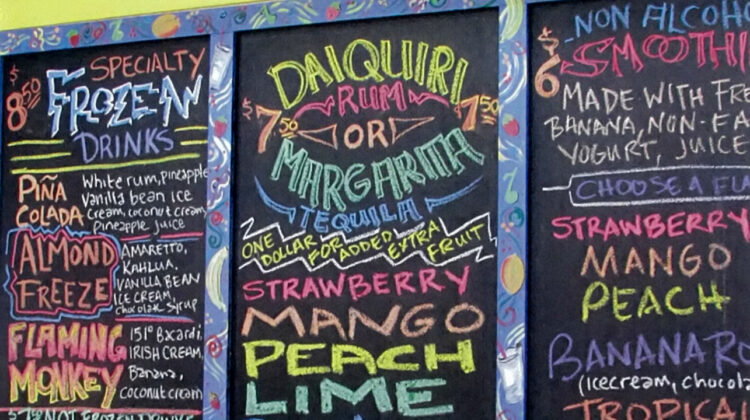 New Orleans is one of those places that everyone wants to go to, based largely on its reputation as a fun, party town with jazz, blues, southern food, and a laidback vibe associated with its tagline of The Big Easy.

Just about everything you have heard about New Orleans is, or has been, true at some point. First-time visitors should do all the things that first time visitors do in any iconic town.

Here are ten standard things for first-timers in New Orleans. These are all tourist cliches, although fun to do. Then you can learn about ten better things to do.

Have a Hurricane in Pat O’Brien’s legendary Irish garden bar. Yes, it’s a fantastic drink. Made properly, it’s a ferocious mixture of light and dark rums, orange, lime and passion fruit juices, with sugar syrup and grenadine to give it the red colour.

Ordering beignets at the world famous Cafe du Monde on the waterfront is a must. Yes, their beignets (fried puffy dough dusted with icing sugar) are very good, but it’s like being in a crowded factory, full of tourists doing what you are doing.

Taking a lunch or dinner cruise on a paddle steamer on the Mississippi River is popular. The boats are copies of the originals and the food is ordinary, but the view from the river and the commentary is interesting. Do go to the visitors’ centre of the site of the 1812 Battle of New Orleans if you can. The centre’s helpfully provided by the National Parks Service, and it’s free, which is why it’s included in all the tours of the area.

Taking a tram or walking along the waterfront is pleasant. You’ll see the Joan of Arc statue (given by the government of France), buy pralines, and see the luxu1y shops in the Outlet Collection at the Riverwalk Centre.

Add in a visit to the French market – open air with good food stalls, and all the T-shirts, cheap jewellery and tacky mementoes you could ever desire. Bourbon Street in the French Quarter was once regarded as a must-do party destination. It still throngs and throbs every night and the LGBT parades on Saturdays liven things up.

Once the heart and soul of the New Orleans vibe, much of what happens is now quite tacky and even sleazy, although not particularly dangerous.

New Orleans has an open carry policy for drinks. It’s perfectly legal to carry an open bottle or a glass of alcohol along the street, and you can stop and buy drinks from the many street front bars.

Food is part of the appeal of the city, so everyone tries gumbo, the famous Louisiana seafood dish served over rice, or jambalaya a seafood or chicken based stew with rice. Be excessive and have Bananas Foster, bananas cooked in butter with lashings of liquor and spices served with whipped cream. The locals love it.

For lunch grab yourself a po’boy, a large soft white bread roll with a wide choice number of fillings. Seafood with salad is common.

New Orleans calls itself the home of jazz. According to New Orleans Online, the city was the only place in the New World where slaves could own drums.

At Preservation Hall, you’ll hear Dixieland swing and the big band styles, but that’s all. Go elsewhere for the myriad of styles now called jazz.

City Mayor Mitch Landrieu calls it a “crazy, wonderful city”, and for visitors that’s true, but, as in the South generally, New Orleans’ past is very much alive and exerting an influence on the present day.

New Orleans is a liberal city in a conservative state. The city is reliably Democrat in a state that is now relentlessly Republican, and has always been conservative, politically, socially and religiously.

One recent controversy of note has been a campaign to remove the statues of Confederate leaders displayed in prominent places in the city.

According to campaigners the statues were symbols of a reviled past, and reminders of white supremacy. To their opponents, the statues were simply part of history. Whatever view one took of the past, it was argued, the past happened and wouldn’t be changed by removing the reminders.

Behind the party image the city projects to tourists, there is a grim reality of racial division which began in slavery, continued under segregation, and has not been ended by the gains made in civil rights in more recent times.

Memphis, the biggest city in Tennessee, epitomises the old and new South of the … END_OF_DOCUMENT_TOKEN_TO_BE_REPLACED

All roads to the Great Ocean Road pass through Geelong, once a bustling port and … END_OF_DOCUMENT_TOKEN_TO_BE_REPLACED

John Bishop is an experienced and widely published travel writer and broadcaster with a long career in journalism and public relations. His travel stories have been published in Stuff Travel, the New Zealand Herald, and in LawTalk (the journal of the NZ Law Society), by the apn chain of newspapers in Queensland, Australia, and by Rotary DownUnder, (the monthly journal of the Rotary movement in Australia, NZ and the Pacific). He has also broadcast his experiences in the Odyssey segment of Nights with Bryan Crump on Radio New Zealand. … END_OF_DOCUMENT_TOKEN_TO_BE_REPLACED