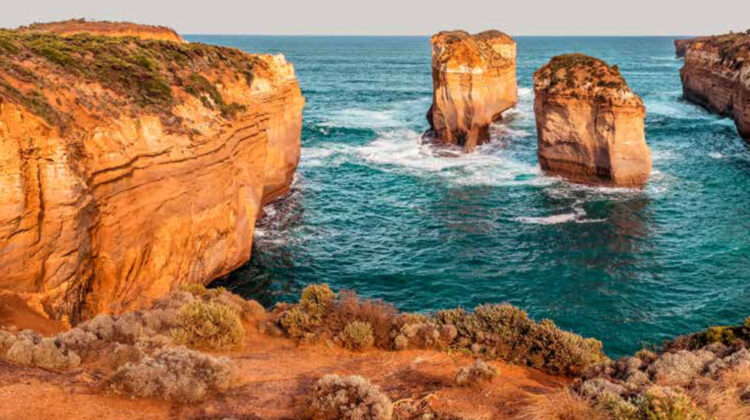 All roads to the Great Ocean Road pass through Geelong, once a bustling port and now an attractive retirement town.

At Geelong, travellers can head due west on the inland road or take the more common route south west to the Victorian Riviera.

We took some friends’ advice and went inland to avoid the holiday crush. It turned out to be good advice.

The first part of our journey from Geelong to Camperdown is due west through good looking farming country, mainly dairy and mainly green, with straight roads and easy driving.

At Camperdown we turned south to Port Campbell, the first of three overnight stops.

We diverted into Timboon where a distillery sells homemade whisky and gin, ice creams and smoked meats. Port Campbell, a small coastal town whose population explodes in summer, is a lovely spot, with a nice bay and gentle beach, motels, bars and cafés.

This was the time of the big bush fires in Victoria and elsewhere, but not here. No one spoke of the fires, which we found remarkable. They were the other side of Melbourne and seemingly of no interest in this part of the world.

From Port Campbell, heading east, we went into the Loch Ard Gorge and, further down the road, to the 12 Apostles, the biggest single attraction on the Great Ocean Road. The Apostles are eight (once nine, but never 12) piles of eroding limestone columns standing up to 50m, rising out of the southern ocean about 50m to 80m offshore from the viewing platform.

The wild sea has carved out caves from the cliff face leaving these majestic but crumbling columns surrounded by swirling waves, with cracks and fissures clearly visible. A tourism brochure enthuses: ‘local folklore suggests that because they seem to exude such power and awe, visitors can only stand in awe of nature and its creation, and hence the name’s biblical origins’.

I was more moved by Loch Ard Gorge and its graveyard, where the wreck of the passenger ship Loch Ard is commemorated.

The Loch Ard was carrying settlers from Britain and Ireland when it was wrecked off the coast in 1879, with just two survivors. A 19-year-old apprentice called Tom Pearce was washed ashore but, hearing cries for help, went back into the water to grab young Eva Carmichael. Tom and Eva received a civic reception in Melbourne; the Royal Humane Society gave Tom its first Gold Medal. There was speculation the pair might marry but Eva returned to Ireland and never saw him again.

The other 52 passengers and crew perished. The memorial stones lying in a graveyard above the gorge are a silent, moving testimony to the power of nature in these parts; more than 600 ships have been wrecked along Victoria’s wild coast.

As we leave the coast, the road winds into the hills of the Otway National Park, closely wooded with dense undergrowth. We travelled with the windows down absorbing the soft, warm air tinged with the scent of eucalyptus.

As we emerged from the bush and climbed again, the wind from the ocean refreshed and cooled the air. Several times we reached the prow of a hill and the panorama of a long coast with a long beach far distant stretched out before us. This was the great Southern Ocean, wild, white-capped with rolling waves and often dangerous.

Johanna Beach had a camping ground and paths through the bush to a long white sandy stretch where a few people relaxed in the sun and some others idly cast long rods into the sea. But no swimmers. They’d have been warned off by the sign that the beach had rips, strong undertows and holes. It was too dangerous.

Not so in and around Lorne, Anglesea and Apollo Bay, where the beaches were safe and crowded with holiday makers.

At Springs Beach near Lorne I asked a local about the constant wind: does it always blow here? Pretty much, he said. “We might get four or five windless days a year. The whole coast is open to the southern ocean which means the wind can whip in and there’s nothing to break its force.”

The pulling power of the coast road is not new, of course. In December 1927, the Age newspaper in Melbourne extolled its virtues: “The beauty of the coastline increases after passing Torquay, and the Ocean Road Trust has provided a beautiful winding drive, with steep, timbered hills on one side, and on the other, the motorist looks down into the dashing waters of the Southern Ocean.”

Little has changed in 93 years, except that the towns have grown immensely and the roads are far busier.

Much more traffic was always coming towards us than going our way. In Lorne the queue to enter the town from the east stretched back two or three kilometres and was barely moving. It proved our decision to take the road in reverse was a good one.

I realised, too, that even after four days of intense sightseeing and immersion in local history and culture, there was still much we had not seen or tried: no fishing, no high wire walk among the trees, nothing with koalas or dingoes. More than enough was left unseen to encourage me to return.

All roads to the Great Ocean Road pass through Geelong, once a bustling port and … END_OF_DOCUMENT_TOKEN_TO_BE_REPLACED

John Bishop is an experienced and widely published travel writer and broadcaster with a long career in journalism and public relations. His travel stories have been published in Stuff Travel, the New Zealand Herald, and in LawTalk (the journal of the NZ Law Society), by the apn chain of newspapers in Queensland, Australia, and by Rotary DownUnder, (the monthly journal of the Rotary movement in Australia, NZ and the Pacific). He has also broadcast his experiences in the Odyssey segment of Nights with Bryan Crump on Radio New Zealand. … END_OF_DOCUMENT_TOKEN_TO_BE_REPLACED