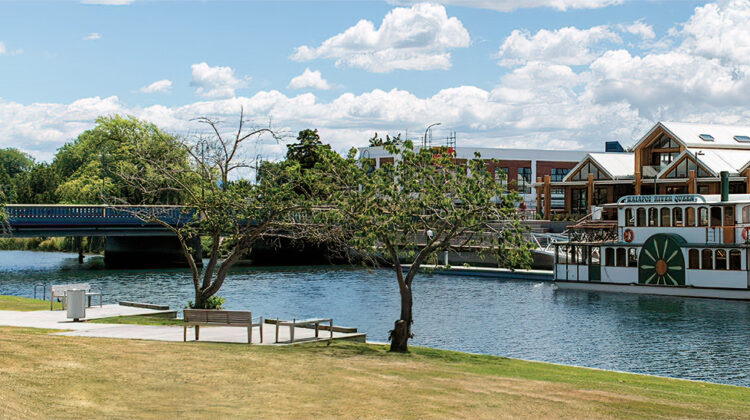 Picture yourself in a boat on a river with shady green trees and cloudy blue skies. Hold on is the shout. You answer quite quickly, a man with fun in his eyes.

I reckon a fast burst upriver in a jet boat with some fancy turns to get the adrenaline going is the most fun you can have on water.

On a crisp North Canterbury morning, my wife and I headed up the Waimakariri River with Steve our driver from Alpine Jet Thrills who delights in fast spray generating turns and grins at the customers’ reactions.

The school holidays had just ended and the company’s owner Paul Mullan tells me they had just three customers. He’s hoping business will pick up heading into Christmas.

We’d also booked a lunch cruise on the Kaiapoi River Queen, a New Orleans style paddle steamer, but that was cancelled.

We were refunded promptly but our question why went unanswered.

Like many tourist operators we spoke to in our weeklong excursion around the beaches and towns of North Canterbury, Mullan’s not happy with the government’s handling of the lockdown system and the help provided to the tourist industry.

The view that the South Island should be at level one is widely and strongly held.

Who would have thought of Kaiapoi as a day trip destination?

In the past its only notable business was the woollen mills. These closed in 1978 and the building has been repurposed for small retail businesses.

Kaiapoi’s one claim to fame was that Norman Kirk, who rose to be Prime Minister in 1972, had once been the mayor (1953-57) and had built his own house in the town.

Now it’s a prosperous hub with North Canterbury’s oldest department store, Blackwell’s as its centrepiece. It’s by the bridge in the centre of the town which has recently undergone a major redevelopment.

It’s overstating it to call it bustling, but there are new shops, a brewery/restaurant, and a lovely riverside walk.

It used to be possible to get a rod from the local i-Site and try your luck from the bridge, and I had planned to do just that (no fish would have been endangered) but the scheme doesn’t
operate anymore.

Kaiapoi now attracts day-trippers, shoppers from Christchurch who drive-up or get on organised coach tours to the town centre, shop at Blackwell’s and the fashion boutiques, stroll along the riverbank, enjoy a coffee somewhere and then go home.

It’s no longer a working-class town although those roots are still strong. A relative who was a relief teacher there recalls being confronted in the school playground in about 2006 by a kid who demanded to know “are you Ford or are you Holden?” Such things mattered then; perhaps less so now that both marques have ceased production in Australasia.

Since the earthquakes in Christchurch, population movement to the north of the city has accelerated. The towns of Kaiapoi, Rangiora and the new town of Pegasus have flourished with new houses being built and new facilities going in.

Nowadays the place is a positive delight, as is the surrounding area. There is a new middle-class influx looking for space, a place to raise kids and to connect with nature.

Locally there is abundant fishing: trout, salmon, herring and whitebait at the river mouth. I counted 22 whitebaiters at Kairahi at the mouth of the Waimakariri (which means cold running water in Mãori) and none of them is catching anything. Maybe tomorrow said one, ever the optimist.

Kaiapoi is a place of significance to Mãori.

Historically, Mãori gathered and traded goods here. The name Kaiapoi translates as ‘kai’ (food) and ‘poi’ meaning ‘swung in from other places’.

The Mãori heritage is still strong. Today a pã site is just grassy mounds, but in 1831 Te Rauparaha and his northern followers attacked the locals from Ngãi Tahu and many lives were lost.

Congratulations to the Waimakariri District Council for the number and quality of the toilets at the beaches north and south of the town. They are new, spacious, clean and seemingly serviced regularly. Nothing says to a visitor, welcome to our part of the world more effectively than a clean loo. Hat tip WDC.

I grew up in Christchurch in the 1970s. I recalled that you went swimming early because by about 11 am the nasty easterly breeze got up at New Brighton and points north.

This wind blew up sand and chilled the skin through to the bone even in summer. In October/ November it hasn’t changed. By mid-afternoon, it is unpleasantly cold and by late afternoon there was a distinct chill moving into the evening.

However, springtime days were warm, encouraging walking, biking and hiking along the many foreshore paths thoughtfully developed for visitors.

Kaiapoi is 25 kms north of Christchurch and is easily reached from SH 1.

Air NZ and Jetstar have multiple daily flights. Paris for the Weekend is a lovely 1920s style café. Nori offers quality sushi and Coffee Culture has a pleasant outdoors by the river.

Memphis, the biggest city in Tennessee, epitomises the old and new South of the … END_OF_DOCUMENT_TOKEN_TO_BE_REPLACED

Lyon is a gem of a city. Set on a hilly site, it's where the Rhône and Saône … END_OF_DOCUMENT_TOKEN_TO_BE_REPLACED

John Bishop is an experienced and widely published travel writer and broadcaster with a long career in journalism and public relations. His travel stories have been published in Stuff Travel, the New Zealand Herald, and in LawTalk (the journal of the NZ Law Society), by the apn chain of newspapers in Queensland, Australia, and by Rotary DownUnder, (the monthly journal of the Rotary movement in Australia, NZ and the Pacific). He has also broadcast his experiences in the Odyssey segment of Nights with Bryan Crump on Radio New Zealand. … END_OF_DOCUMENT_TOKEN_TO_BE_REPLACED