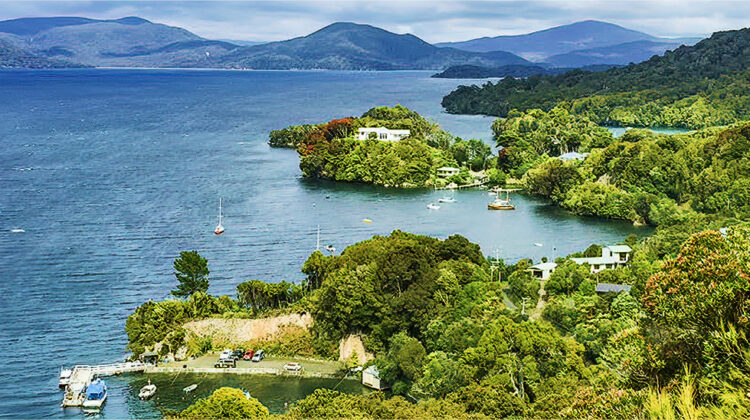 A man called String Ballantyne exemplifies the spirit of what makes Stewart Island a different kind of place from the rest of New Zealand.

He was a larger-than-life figure, a legend in the Bluff, Foveaux Strait and Stewart Island area, a fisherman who was a pioneer in the crayfishing industry, and who built the southernmost house in New Zealand on a promontory on the south side of Stewart Island.

Phillip Ballantyne acquired the moniker ‘String’ from his Dad’s habit of tying up crates with string rather than wire as other fishermen did.

String died in a car crash in 2015 after a big night out at Zookeeper’s Café in Invercargill, with a good feed of oysters inside him. His generosity and tales of his derring-do are still recalled.

Today the history of the island is recalled in pictures in the South Sea Hotel, still the only one in town and the nerve centre of everything that happens on an island that is just a bit different from the rest of New Zealand.

Recent history can be viewed in a homemade movie screened at the Bunkhouse theatre on the optimistically and accurately named Main Street.

The 40-minute film A Local’s Tale is showing its age but depicts the struggles of locals to establish sheep and dairy farming (both eventually abandoned) and to be replaced by a dependence on fishing and tourism.

Crops were hard to grow given a lack of land and a supportive climate which leaves fishing, long the mainstay of the island economy and the main reason why anyone would want to endure the climate.

By local accounts, String Ballantyne was an astute businessman, and both held and traded large amounts of cod, pāua and crayfish quota. Others have prospered in the same way too.

Ironically, crayfish are now hard to get, such is the demand from China.

I paid $60 for a half a reasonably sized tail in the hotel; enough for an entrée for two, but a good feed would need a bank loan.

Availability is the real issue, the dining room manager explained; if a fisherman can get $120–150 a kilogram from Chinese buyers who have a limitless demand, why bother supplying the local market at all.

The uniqueness of the place begins wharf side in Bluff, where there is a car park for ferry passengers to leave their vehicles. No tickets on entry; pay on your return, but it’s an honesty system.

There was nothing to stop me or another other users just driving away.

While most visitors take the chance of getting a decent crossing of Foveaux Strait (and we had two reasonable journeys of just over an hour each way) you can fly – 20 minutes.

There are places to stay other than the pub, but not many.

There are places to eat besides the pub, but not many.

The classiest is the Church Hill restaurant serving all local produce which has just eight at a sitting. Book well in advance.

Up one street is the Kai Kart whose mainstay is blue cod and chips, and on Main Street, there is the Fin and Feather Eatery caravan which serves venison burgers and chopped up roast potatoes.

We ate ours from recyclable cardboard containers at tables by the caravan in the cooling dusk.

The Four Square store sells everything, including milk in glass bottles, sandwiches for lunch and the owner is known as ‘Ark-wright’ – hopefully, because the shop is open all hours rather than for his mendacious habits.

We bought sandwiches and batteries and thought him a cheery and helpful soul. 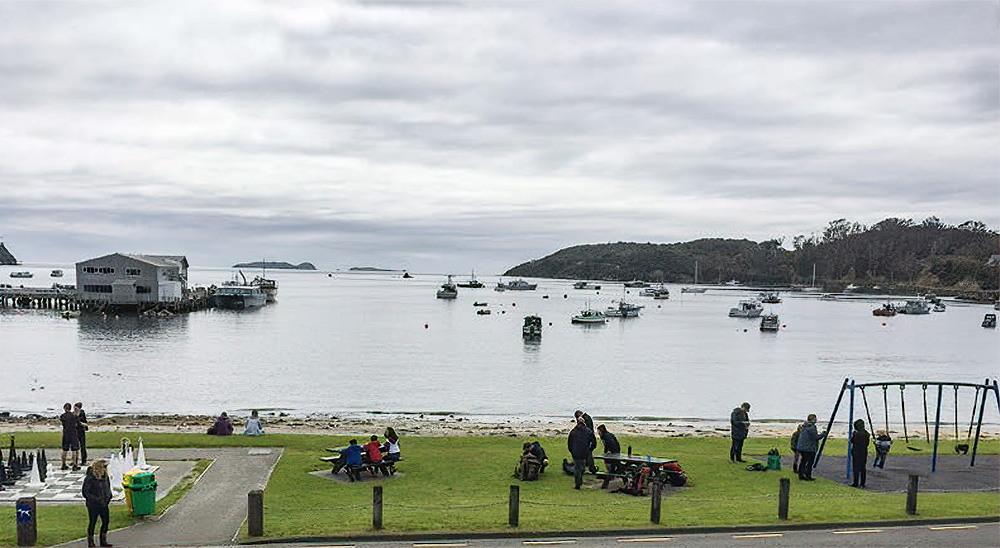 We took the bus tour offered by the Stewart Island Experience who also operate the ferries.

The island is small with just 20 km of roading, so there is not exactly a lot to see.

The bus takes you to the top of the hill above the town, which provides a great view, you can also you can walk up on your own from town, a bit of a stretch but very possible if you are looking for a road walk.

The second stop is around the bay by the eucalyptus gum trees looking back at the town with a bit of history on the area and information on the local efforts with trap lines for rats, stoats and cats.

The third stop is on the other side of the island and unless you’re a keen walker, you would need a vehicle of some kind to get there.

This was the ending point of the tour before we got dropped back to the village centre.

This was the most interesting as it was the start of a couple of the major treks for trampers and where the communications cable linking the Bluff and Oban telephone exchanges came ashore in June 1902.

Repairs were frequent and costly and it was replaced by a microwave link in 1947.

Sir Joseph Ward, the local MP (Awarua electorate) at the time – and happened to be Acting Prime Minister – took advantage of his position to fulfil a long-standing promise for a proper phone service.

A ‘must see’ for visitors is a visit to Ulva Island a great option for everyone.

We got ourselves there by water taxi but tours are available. Ulva Island is DOC’s showcase achievement: a predator-free island after strenuous efforts at elimination achieved its goal.

The weka and other wildlife, including sea lions on the shore, are free to roam. The walks are a delight and it’s easy to spend three or four hours absorbing nature, you can also get a private tour from operators on the island.

It was once inhabited by humans, and at the turn of the last century much was made of buying a postcard from the southernmost post office in the country. The building is still there; a reminder of our efforts to live with nature in an inhospitable environment.

We had two full days there which was long enough if you aren’t doing big hikes (and we weren’t).

In short, Stewart Island is now a day-trip destination. We wanted longer than that, and we left well satisfied with our experiences.

All roads to the Great Ocean Road pass through Geelong, once a bustling port and … END_OF_DOCUMENT_TOKEN_TO_BE_REPLACED

John Bishop is an experienced and widely published travel writer and broadcaster with a long career in journalism and public relations. His travel stories have been published in Stuff Travel, the New Zealand Herald, and in LawTalk (the journal of the NZ Law Society), by the apn chain of newspapers in Queensland, Australia, and by Rotary DownUnder, (the monthly journal of the Rotary movement in Australia, NZ and the Pacific). He has also broadcast his experiences in the Odyssey segment of Nights with Bryan Crump on Radio New Zealand. … END_OF_DOCUMENT_TOKEN_TO_BE_REPLACED