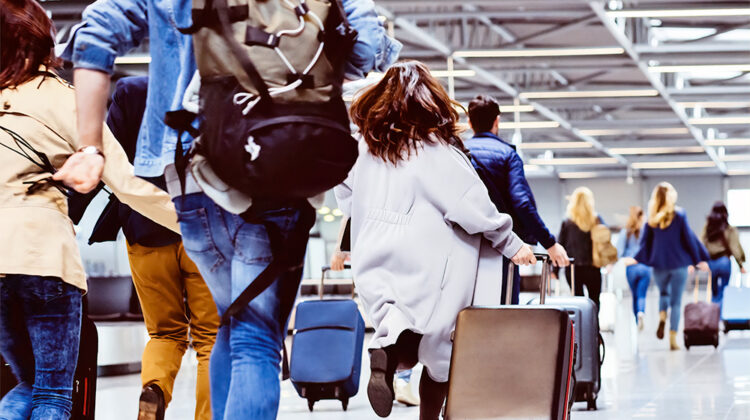 When I first saw her she was huddled in a near tearful conversation with another young woman of about her age, seeking comfort, information and reassurance, but clearly getting none of those.

The first girl – I’ll call her Abby, although throughout our brief encounter I never knew her name – was clearly distressed about something. The second was listening politely in that disinterested manner strangers have about another’s plight.

We are outside Auckland’s domestic terminal one cool evening recently, a small but growing crowd waiting for the bus to the international terminal.

“It’ll be all right, won’t it?” I heard Abby say in that tone which is more about reassuring one’s self than asking a serious question of the other person. The other person sort of nodded, looking away and down at the same time. Not my problem, her stance shouted out. Abby wasn’t hearing that.

As we got on to the now crowded bus I found myself standing next to Abby, still looking tearful, although not actually crying.

She was blonde, North American by her accent, with a back pack, a big leather two- handed carry-all with a sleep cushion around her neck plus a handbag. She looked 17 but was probably older. In any event too inexperienced to be alone and now clearly upset and almost distraught.

I thought of my own daughter who’d been travelling internationally at much her age.

“They’ll still let me on even if I’m a bit late won’t they,” she said to me in the same tone as she’d used on the other girl.

“I’m late for my international flight,” she said as the bus swayed and lurched around the many corners between the domestic and international terminals in Auckland.

“I’ve checked my bags through already, but I missed my domestic flight and now I’m late,” she stammered as the lips quivered and eyes misted over.

A parental lecture on the need for planning for disruption flitted across my mind briefly. But real tears seemed only a cross word away.

As the bus bumped into international I asked: “What gate are you?”

“Come with me,” I said as the bus stopped, and we pushed our way through the crowd into the terminal, bustling along the concourse and up the escalator to the second floor.

“There’s passport control,” I said, pointing across the floor to my left. “Have you filled in a departure card?”

“Nooooo,” and the eyes clouded, and the lips quivered again. “Come with me,” and we raced to the security entrance. I grabbed a card. “Fill this in now. I will wait for you.” (I had done mine earlier.)

We entered the queue for security together, but I made it through first. I looked behind. She was at a counter where a tall security man was slowly looking through her carry-on.

What now? I thought uncharitably. As I approached but stood back, the security man produced a pair of nail scissors from her hand bag, saying, “you can’t take these on board.”

“I don’t want to,” said Abby, as he dropped them into the box of disposables.

No longer a terrorist threat, I said: “Come. Let’s find your departure gate.” She was bound for San Francisco; we’d established that earlier. Gate four, I think the board said. Status: Boarding. Not closed or departed. Boarding. Still time.

“Over there.” I pointed to the sign giving the direction of gate four. “Run,” I said. She loped along in an ungainly way, too much carry-on in her arms, boarding pass clutched uncomfortably in one hand, the other controlling the contents of the big handbag. She didn’t look back. I didn’t see her again. I hope she made it. She just wanted to be home.

Travelling’s easier when people go out of their way to help. Three incidents … END_OF_DOCUMENT_TOKEN_TO_BE_REPLACED

John Bishop is an experienced and widely published travel writer and broadcaster with a long career in journalism and public relations. His travel stories have been published in Stuff Travel, the New Zealand Herald, and in LawTalk (the journal of the NZ Law Society), by the apn chain of newspapers in Queensland, Australia, and by Rotary DownUnder, (the monthly journal of the Rotary movement in Australia, NZ and the Pacific). He has also broadcast his experiences in the Odyssey segment of Nights with Bryan Crump on Radio New Zealand. … END_OF_DOCUMENT_TOKEN_TO_BE_REPLACED