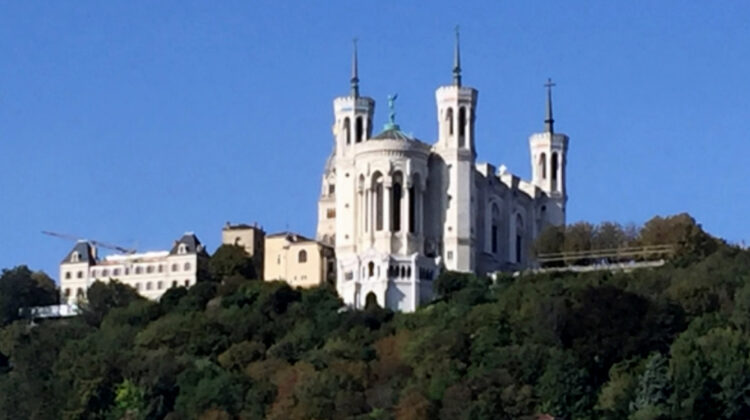 Lyon is a gem of a city. Set on a hilly site, it’s where the Rhône and Saône rivers meet – making it a it a natural military and commercial and an attractive location in its own right.

Its long history dates back to Roman times when it was called Lugdunum and was the capital of Roman Gaul. By 1032 it was part of the Holy Roman Empire but was annexed to France in 1312.

It is France’s third city (after Paris and Marselles,) the home of French gastronomy, centre of the Marist movement, and a city with a complex and violent social history.

The city flourished in the Renaissance period; commercial fairs started in 1464 when Italian bankers arrived, and from 1473 it was one of the most active printing centres in Europe. In the 17th century it was the silk manufacturing capital of Europe.

It is known as a centre of the arts and culture, and most particularly for being the gastronomic capital of France, a title bestowed on it by the gourmet Curnonsky in 1934, although its culinary reputation goes back to Roman times.

At the time of the French Revolution, Lyon was a centre of monarchist resistance and later opposition to the new French Republic and the National Convention that ruled France.

Paris sent the Revolutionary Army to quell dissent to its programme and 1,684 people are recorded as being shot or guillotined.

In 1831, 1834 and 1848 there were uprisings in Lyon led by the silk workers known as Canuts. In the ﬁrst revolt the silk workers sought a minimum price to counter the eﬀects of falling demand and lower prices for silk products.

Manufacturers refused and the silk workers revolted and seized the city in a battle that had about 600 casualties including 169 deaths. Paris sent in the army which peacefully retook the town and plans for a minimum price were dropped.

In 1834 the manufacturers wanted to cut wages which the silk workers, who had formed numerous secret societies and had absorbed the ideas of French socialist thinker Henri de Saint-Simon, resisted violently. Again, they were defeated. After a mass trial, about 10,000 people were deported or imprisoned for lengthy periods.

There was a further uprising in 1848 (most of Europe was ablaze with revolutions that year), but it is the 1831 revolt that is best remembered and commemorated in the silk museum in the city.

In World War II Lyon was a centre of the French resistance movement. Nazi commander Klaus Barbie, “the Butcher of Lyon”, is thought to be responsible for the deaths of 4,000 people including Jean Moulin, a handsome and dashing resistance leader.

At the end of the war Barbie was captured but was recruited into American and later West German intelligence to work against the communists. As a reward he was sent to Bolivia, but the French government eventually managed to extradite him to France where he was convicted of war crimes in 1987 and he died in a French jail aged 77, four years into a life sentence.

On the hill above the town is the Basilica of Notre-Dame de Fourvière, which is dedicated to the Virgin Mary.

It has a large statue of Mary with child positioned over the altar instead of the usual Christ on a cross.

The two Christ ﬁgures are much smaller and positioned oﬀ to each side of the altar, which conventional American Catholics on my most recent visit found both odd and somewhat distressing.

Lyon is the epicentre of the Marist movement which makes the mother of Jesus almost as important as her son.

The basilica was built after the Franco-Prussian War of 1870-71.

The good citizens of Lyon, scared that the Prussians would wreck the city, prayed to the Virgin to protect them.

In fact, the Prussians did not come close and marched instead on Paris, but Mary got the credit for saving the city and a public appeal raised funds to build a church in dedication to her.

Inside are extraordinarily elaborate and beautiful pictures, carvings and decorative religious art eclipsing even some of the most lavishly painted baroque style churches, but outside the stone is rather rough-hewn and plain by comparison.

Apparently other than building the basilica itself, most of the money raised was spent on art and decoration for the interior and none remained to titivate the exterior.

Most recently a statue of Pope Benedict, a great believer in the power of the Virgin, was installed immediately outside; further testimony to the power of the Marist movement within the church.

Outside the basilica visitors can take in a panoramic view of the city including three skyscrapers known locally as the pencil, the sharpener and the rubber because, at a distance, their shape and positioning in relation to each other make them look like a box set of school kids writing equipment. (Other buildings also have nicknames including the cheese grater and the death star).

In the 19th century the French writer Stendhal remarked: “I know of only one thing that one does very well in Lyon, one eats admirably and better than in Paris.”

The culinary tradition goes back 2,000 years to when Lyon was Lugdunum, capital of the Three Gauls and controlling the wine trade – all imported back then.

Coming from the north or the east, Lyon is a gateway to wine country; the light and ﬂavoursome reds of Beaujolais and then the deeper more complex reds of Burgundy and the majestic whites of Beaune and Chablis (and Montrachet) and then further south to Provence and its characteristic rosé style whites – pink in complexion but tasting earthy white.

Numerous tours are available, and I spent half a day at a typical vine- yard where a banker from Paris was converting the place into a purely organic vineyard.

Back in the 16th century the Dutch humanist Erasmus declared: “It is not better treated at home than it is in Lyon in a hotel. The mother ﬁrst comes to greet you, begging us to be in a good mood and to be pleased that we will serve you. truly sumptuous.”

The “mothers” are one of the cornerstones of the local culinary scene and to them is owed much of what makes Lyonnaise cuisine distinctive. In the 18th century they cooked in the great houses of the bourgeoisie, but later had their own establishments.

The greatest “mother” is Eugénie Brazier the ﬁrst woman to have a restaurant with three Michelin stars. She fostered a generation of great chefs including Paul Bocuse, himself a legend in the cuisine industry.

The bouchon is a small intimate restaurant that serves traditional lyonnaise food. According to L’Association de défense des bouchons lyonnaise: “the emphasis is not on haute cuisine but rather on a convivial atmosphere and a personal relationship with the owner”.

The association certifies restaurants seeking accreditation as authentic bouchons annually, and currently there are about 20 such establishments although many more trade as such. is now heavily oriented towards the tourist trade.

The origin of bouchons lies in the small inns visited by silk workers passing through Lyon in the 17th and 18th centuries. Nowadays certiﬁed restaurants display a marionette called Gnafron, (in puppetry the companion of Guignol) who has a glass of wine in one hand and a napkin in the other symbolising the pleasures of dining. The agreed standard was that the food was to be locally sources, nutritious, simply prepared and cheap.

I ate at an accredited bouchon which oﬀered four diﬀerent menus starting at €15 for a four-course meal including cheese. There were choices in each menu for starters, mains and desserts, and one could choose a dish from a lower-priced menu if something particularly took your fancy.

The room was crowded with about 40 diners, but my wife and I arrived without a booking and were seated at a table for two. Service was as good as anywhere else in France and better than some more expensive places.

I started with a dish of what appeared to be thick gravy in which a poached egg had been placed in such a way that the yolk looked like an enormous yellow eye protruding from a muddy background.

That said, the gravy-like mixture was very tasty and ﬁlling. A piece of bavette steak followed with lyonnaise potatoes and a green vegetable.

I thought that quite a good meal already, only to be presented with a cheese course, which looked like whipped white butter and tasted like a young comté, France’s single most popular cheese.

A fruity dessert followed but I could have had meringue and other delicacies. This was a €25 which I thought to be a bargain. I had certainly paid more elsewhere and got less, and of a lower quality.

All roads to the Great Ocean Road pass through Geelong, once a bustling port and … END_OF_DOCUMENT_TOKEN_TO_BE_REPLACED

Lyon is a gem of a city. Set on a hilly site, it's where the Rhône and Saône … END_OF_DOCUMENT_TOKEN_TO_BE_REPLACED

John Bishop is an experienced and widely published travel writer and broadcaster with a long career in journalism and public relations. His travel stories have been published in Stuff Travel, the New Zealand Herald, and in LawTalk (the journal of the NZ Law Society), by the apn chain of newspapers in Queensland, Australia, and by Rotary DownUnder, (the monthly journal of the Rotary movement in Australia, NZ and the Pacific). He has also broadcast his experiences in the Odyssey segment of Nights with Bryan Crump on Radio New Zealand. … END_OF_DOCUMENT_TOKEN_TO_BE_REPLACED