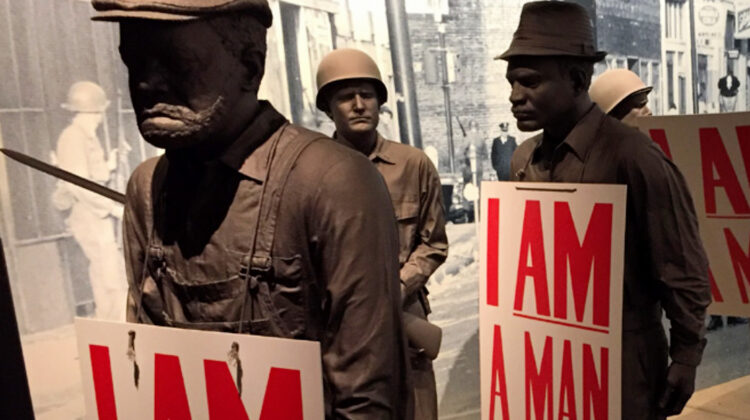 In the southern states of the US the economic importance of slavery and the accompanying belief in the inherent superiority of the white race led to a system of racial segregation that was sanctified by law and practice. Though frequently challenged it became very difficult to change.

This is the story consistently told by the leading civil rights museums I visited in Memphis, Tennessee; Birmingham and Montgomery, Alabama; and Jackson, Mississippi – all stalwart states of the old South.

After many years of shunning their own history, Americans are increasingly keen to come to terms with their past, and the museums and other landmarks on the Civil Rights Trail (a hundred-plus sites in 15 states marketed by city and state tourist authorities) are becoming major tourist drawcards.

Amendments to the US Constitution passed after the end of the Civil War in 1865 were supposed to free black people from slavery and to guarantee them equal civil rights.

In the South these rights were enforced only by the presence of the occupying Northern armies. For a brief period blacks were elected to a wide range of public offices, including Congress. However, this era – known as Reconstruction – ended in 1876 when the last federal troops withdrew, leaving the South politically in the hands of “Redeemer” Democrats, who wished to redeem the South from the influence of Radical Republicans (like Lincoln) who had both waged and won the Civil War and had freed the slaves. In effect, this was a military occupation which is still remembered and resented.

The war had been a military, economic, political and social disaster for the South. “Take a good look my dear. You can tell your grandchildren how you saw the Old South disappear one day,” Rhett Butler tells Scarlett O’Hara in Gone with the Wind as they escape a burning Atlanta on a small buggy.

The Southern States were required to write new state constitutions that ratified the 13th Amendment, which abolished slavery, and the 14th and 15th Amendments giving blacks equal civil and voting rights as the price of re-admission to the Union.

After re-admission, in state after state, white legislators found ways to use the law to deny blacks the ability to register, vote, own property and interact with white people on equal terms. These were the “Jim Crow” laws, so called after a song called Jumping Jim Crow, which mocked blacks’ intelligence.

In 1890 Mississippi adopted a new constitution introducing a poll tax and a literacy test which prevented most blacks and many poor whites from voting.

Alabama funded its redevelopment through a new form of slavery by leasing convicts to local companies to provide cheap labour for the coal mines, the lumber yards and to build and maintain roads. In 1898, 73% of the revenue of the state government of Alabama came from convict leasing.

The new city of Birmingham (founded in 1871) was booming with its plentiful coal and iron ore depos-its fuelling its steel mills. Convict labour and a flood of migrants from Europe kept wages down. Other free men – black and white – were forced into sharecropping which had its own unique slave-like conditions.

And the colour bar – the active segregation of blacks and whites – was practised right across the South – leading one writer to observe, “in the South no one questioned white supremacy any more than a fish thinks about the wetness of the water.”

The legality of segregation was confirmed in an 1896 Supreme Court decision: Plessy v Fergusson 163 US 537which said that “separate but equal” facilities were allowed by law. The facilities may have been separate but they were never equal.

In Birmingham I met Armand Bragg, now 73, who was a foot soldier in Dr Martin Luther King’s ‘army’ seeking to break down segregation in the city in the 1960s.

These days he is a tour guide at the 16th Street Baptist Church where four young black girls aged between 11 and 14 were killed in 1963 after Ku Klux Klan sympathiser Robert Chambliss planted 10 sticks of dynamite in the church basement.

I asked him about relations between the races at that time. “There was no type of relationship. White people ruled everything. Walking down the street and if a white person came along, you got out of the way so they would pass. It was nothing for them to call you ‘boy’ or ‘nigger’.”

And if you didn’t get out of the way?

“They could call the police or probably hit you with some kind of weapon, cos you weren’t going

And then there was the Klan. The first Klan was founded in Pulaski, Tennessee, “sometime between December 1865 and August 1866 by six former officers of the Confederate army as a fraternal social club,” according to Wikipedia, and quickly spread into nearly every Southern state, launching a reign of terror against Republican leaders both black and white.

Historian Eric Foner observes: “Klan violence worked to suppress black voting, and campaign seasons were deadly. More than 2,000 people were killed, wounded, or otherwise injured in Louisiana within a few weeks prior to the Presidential election of November 1868. The KKK made people vote Democratic and gave them certificates of the fact.”

Klan membership surged when whites felt their vital interests were threatened as occurred with waves of migrants (many Catholic or Jewish) in the 1920s, and again in the 1960s, when the civil rights movement became active.

Notable moments in the civil rights struggle include the 1954 Supreme Court case Brown v Board of Education 347 US 483which ordered (eventually) public schools across the land to be desegregated.

The southern response was organised by veteran senator Henry Byrd of Virginia who got 101 of the 128 Southern Congressmen to sign the “Southern Manifesto on Integration” which said that the Supreme Court’s ruling jeopardised white people’s “rights, traditions and way of life”.

In 2004 and 2012 voters in Alabama rejected an amendment removing the separate schools pro-vision from the state constitution.

And then there was the battle by James Meredith, a black air force veteran to enrol at the University of Mississippi. In September 1962, State Governor Ross Barnett stood in the doorway of the university and declared, “To maintain the tranquillity and dignity the state of Mississippi, I do deny you admission.”

A Federal court order secured his enrolment – the first black to do so – and the white response was a deadly riot in which two people were killed and up to 300 injured, amid much damage to property.

As a side note, while Meredith, now 85, is a hero of the civil rights struggle, he has never been comfortable with the movement. He later worked on political campaigns for both Ross Barnett and former Klansman David Duke but has never explained why.

Across the South in the late 1950s and through the 1960s there were many campaigns beginning with the bus boycotts in Baton Rouge, Louisiana in 1953 and then famously in 1955/56 in Montgomery, Alabama with Rosa Parks; this thrust a local pastor, Dr Martin Luther King Jnr, into the public spotlight.

Blacks got on the bus at the front, paid the driver, and then got off again, went to the back door and got on again to sit in coloured-only seats which they had to give up on request by a white person.

It took 381 days but the campaigners won.

In other moves black students went to whites-only lunch counters seeking service, being denied it because of their race and then refusing to leave and being arrested. The movement started in Greensboro, North Carolina in 1960 and was repeated in Nashville and other cities.

In Nashville the Woolworth’s restaurant where one of the first sit-ins took place is still operating; the original counter is preserved at the National Civil Rights Museum in Memphis. Sit at that counter and watch film of protesters training in passive resistance techniques.

In 1963 King and his supporters decided to take on Birmingham, the most segregated city in the South, according to King. The primary weapon was a ‘selective buying’ campaign (boycotts being illegal under state law). Blacks stopped buying from white-owned stores to force change.

In Birmingham the police used water cannon and savage dogs to quell marchers to stop them going downtown, events commemorated by sculptures in Kelly Ingram Park opposite the 16th Street Baptist Church and the Birmingham Institute of Civil Rights.

Seeing this level of violence on the television news shocked the nation and empowered President Kennedy to declare support for moves to end segregation across the nation.

Birmingham is also notable for its part in the Freedom Riders campaign in 1961/62. In 1960 the Supreme Court held in Boynton v Virginia 364 US 454 that segregation on interstate buses was illegal. The Freedom Riders were groups of black and white students who rode the buses together to make desegregation a reality.

On 14 May 1961, two buses with Freedom Riders on board left Washington DC heading for New Orleans. The Greyhound bus got as far as Anniston, a small town 60 miles east of Birmingham where a white mob attacked the bus, slashed its tyres and set fire to it. They were dispersed by state troopers.

The second bus, a Trailways, reached Birmingham. By agreement with Police Chief Eugene “Bull” Connor a Klan group had a free hand for 15 minutes. They trapped the Freedom Riders inside and beat them up; most ended up in hospital.

These events are documented in all the museums with civil rights displays and in a Freedom Riders Museum in Montgomery, Alabama.

Also, in that city, are two other important memorials, both the work of the Equal Justice Initiative (EJI) headed by civil rights lawyer Bryan Stevenson.

The EJI narrative at the Legacy Museum explicitly links slavery to white supremacy, segregation and continuing racial injustice in the judicial system including police shootings, and the mass incarceration of people of colour.

The other is the National Memorial for Peace and Justice, known as the National Lynching Memorial, which opened in April 2018. The names of known victims are recorded county by county on 805 large steel sheets hung from the ceiling in an open barn-like structure.

There is a brief description of the event. “A black man was lynched in Millersburg, Ohio, in 1892 for ‘standing around’ in a white neighbourhood.”

“After a white man attempted to assault Jack Brownlee’s daughter in Oxford, Alabama, in 1894, Mr Brownlee was lynched for having the man arrested.”

EJI researchers have documented 4,400 lynchings across the US between 1877 and 1950, concentrated in Southern states, 98% of them being African- Americans. The EJI labels these “racial terror incidents.”

Today, the battle for equal rights and social justice continues.

Memphis, the biggest city in Tennessee, epitomises the old and new South of the … END_OF_DOCUMENT_TOKEN_TO_BE_REPLACED

All roads to the Great Ocean Road pass through Geelong, once a bustling port and … END_OF_DOCUMENT_TOKEN_TO_BE_REPLACED

John Bishop is an experienced and widely published travel writer and broadcaster with a long career in journalism and public relations. His travel stories have been published in Stuff Travel, the New Zealand Herald, and in LawTalk (the journal of the NZ Law Society), by the apn chain of newspapers in Queensland, Australia, and by Rotary DownUnder, (the monthly journal of the Rotary movement in Australia, NZ and the Pacific). He has also broadcast his experiences in the Odyssey segment of Nights with Bryan Crump on Radio New Zealand. … END_OF_DOCUMENT_TOKEN_TO_BE_REPLACED