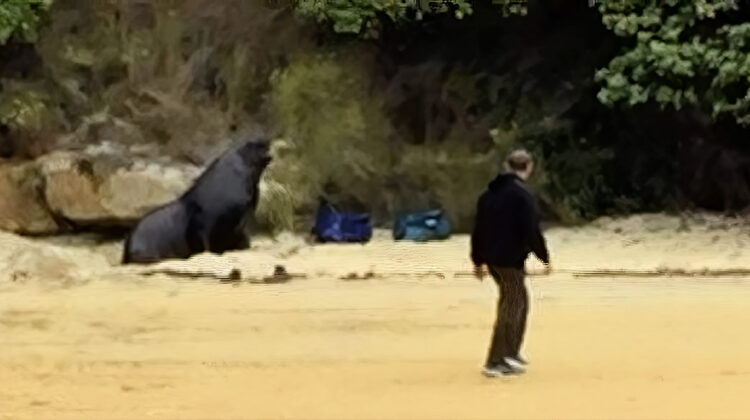 Ulva Island is a predator-free island a short boat ride from Rakiura/Stewart Island. It’s a destination popular with casual walkers, naturalists and those interested in the outdoors, but care must be taken with the local wildlife.

On a recent visit, our party had several encounters with a weka, who thought that we had brought it lunch.

The weka is a flightless native bird that prowls in the daytime and looks a bit like a kiwi with a much shorter beak and stumpy wings, but is far more curious and aggressive than any kiwi.

One of our party was sitting on a fallen log enjoying a sandwich when Wally (our attempt to give him a name) came marching up, giving out an occasional squark, inspected the sandwich by walking around the person on the tree stump, and then hopped down in front of her and leapt up to try and snatch the sandwich.

Wally’s efforts were unsuccessful but provided much amusement to the rest of the group who stood around snapping on their phones.

As we were leaving by water taxi to return to Stewart Island, a small drama played out on the beach by the jetty where the taxis and other vessels come and go.

On the left side of the beach are the day packs of a couple of visitors who had walked across the beach to look at the old post office building, the first home built on the island. On holiday?

In between them and their packs is a large sea lion who makes aggressive rumbling noises as they approach. The sea lion is close to the packs and there doesn’t seem to be enough beach to walk safely around it, who has a decided proprietorial air about the packs.

Enter the hero: the local DOC ranger who has clearly played this scene before comes from upstage as we sit in the water taxi observing the situation.

He picks up a long stick and waves it in the direction of the sea lion who roars a bit and recoils. As he gets closer the pointed stick is used in a jabbing motion towards, but not touching the sea lion.

The sea lion retreats a bit each time, and the ranger is able to pick up the day packs. Sea lion says enough is enough and slithers towards the sea which is just a few meters away, folds himself into the waves and disappears.

Trampers and day packs are re-united, and the crowd on the boat applauds the bold actions of the ranger for whom this is just another day at his outdoor office.

Lyon is a gem of a city. Set on a hilly site, it's where the Rhône and Saône … END_OF_DOCUMENT_TOKEN_TO_BE_REPLACED

Travelling’s easier when people go out of their way to help. Three incidents … END_OF_DOCUMENT_TOKEN_TO_BE_REPLACED

Memphis, the biggest city in Tennessee, epitomises the old and new South of the … END_OF_DOCUMENT_TOKEN_TO_BE_REPLACED

John Bishop is an experienced and widely published travel writer and broadcaster with a long career in journalism and public relations. His travel stories have been published in Stuff Travel, the New Zealand Herald, and in LawTalk (the journal of the NZ Law Society), by the apn chain of newspapers in Queensland, Australia, and by Rotary DownUnder, (the monthly journal of the Rotary movement in Australia, NZ and the Pacific). He has also broadcast his experiences in the Odyssey segment of Nights with Bryan Crump on Radio New Zealand. … END_OF_DOCUMENT_TOKEN_TO_BE_REPLACED