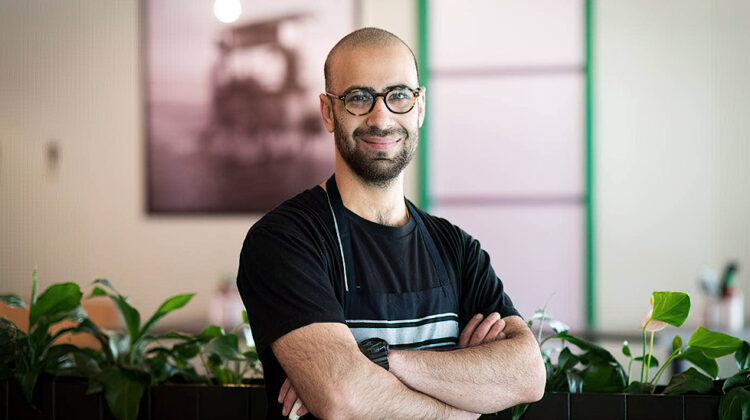 Vaibhav Vishen calls himself a progressive Indian chef because he uses the traditional recipes and methods of his Indian training but is not bound by them.

For him, the methods, ingredients and presentation of traditional dishes should evolve with changing tastes, and permit new ingredients, substitutes and new influences.

Born and raised in Kashmir to well-to-do parents he was mostly a compliant child, but he wasn’t allowed to eat the street food he craved to try. His parents were suspicious about the ingredients and the quality of the water.

By the age of 14 Vaibhav knew he wanted to be a chef, a decision which didn’t please his achievement minded parents and grandparents. “My grandfather owned and ran schools. They all thought I should become a doctor or engineer or something else with status.”

“I am an inquisitive person who wants a quick result. With cooking, you get instant gratification.

“In 1999 while watching the Discovery Channel I saw Ferran Adrià, whose El Bulli restaurant was awarded World’s Best Restaurant five times and I was also inspired by the late great Anthony Bourdain.

“My cooking is highly connected to my childhood and nostalgia. I was trained by chefs in India who had been trained in Germany, France and India. I remember this as a wholly positive experience with people who gladly provided me with encouragement, guidance and help along my journey.”

Vaibhav, now 33 came to Wellington in 2014. He graduated from the Cordon Bleu school in 2017 and worked in the Amora Hotel, Zibibbo and Mr Go’s becoming head chef there in January 2018 and then moving to the Doubletree in Wellington as head chef.

There he earned a reputation for tasty, exotic and exciting Indian food based in part on his nine years’ experience as owner and chef of the Kitchen Atelier in New Delhi.

He identifies as a progressive Indian chef; progressive being “going by the traditional books but making changes to anything or everything involved to cater for modern tastes and to create new experiences.”

Wellington On A Plate

Vaibhav had worked for eight months on what he called his Kashmiri Odyssey, a sold-out Wellington on a Plate Event for 186 guests; a six-course degustation ranging from medieval Kashmiri wazwan to 20th century street foods of Kashmir, combined with Indian Theatre.

It was scheduled for Saturday 21 August however Level four lockdown saw that off.

Vaibhav is full of ideas and initiatives. He recently opened a pop-up restaurant with Indian street food and served 900 plus people in two days. And as an investment, he’s bought Ashton Norwood, a function venue in Upper Hutt offering both very Kiwi and fine dining food.

Wandering in the woods above Wellington’s Mount Victoria, Vaibhav discovered mallow, which looks like a weed but is in fact a leafy green like okra.

“In India it is a prized vegetable and is commonly served once or twice a week or more.

His wife, Maanvi Chawla, is also from Kashmir. They were to be married in India in April 2020 with the usual family trappings, but with India in lockdown they got married in court and then eloped. She now works in Wellington as a conservation architect.

His favourite foods to work with are lamb and kohlrabi, a white turnip like vegetable common in Germany but lauded in India. It’s available here and typically used like celeriac.

Constantly making cultural connections to his homeland is very important to him.

Lyon is a gem of a city. Set on a hilly site, it's where the Rhône and Saône … END_OF_DOCUMENT_TOKEN_TO_BE_REPLACED

Travelling’s easier when people go out of their way to help. Three incidents … END_OF_DOCUMENT_TOKEN_TO_BE_REPLACED

Memphis, the biggest city in Tennessee, epitomises the old and new South of the … END_OF_DOCUMENT_TOKEN_TO_BE_REPLACED

John Bishop is an experienced and widely published travel writer and broadcaster with a long career in journalism and public relations. His travel stories have been published in Stuff Travel, the New Zealand Herald, and in LawTalk (the journal of the NZ Law Society), by the apn chain of newspapers in Queensland, Australia, and by Rotary DownUnder, (the monthly journal of the Rotary movement in Australia, NZ and the Pacific). He has also broadcast his experiences in the Odyssey segment of Nights with Bryan Crump on Radio New Zealand. … END_OF_DOCUMENT_TOKEN_TO_BE_REPLACED