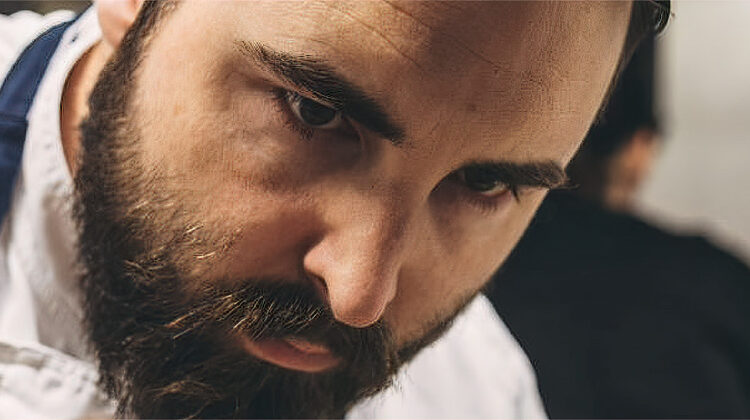 MacLean Fraser, the executive chef at Wellington’s Bolton Hotel and the 2018 Chef of the Year, is something of a Renaissance man.

He has a degree in classical studies, hunts game, brews beer and plays cricket. At 38 years of age, he has advanced from being a commis chef at Wellington’s well regarded Bouquet Garni Restaurant in 2004 to take up the position of executive chef at the stylish Bolton Hotel in 2014.

In this career journey of just 10 years, he was commis chef at the renowned Logan Brown, chef de partis at the Rarotongan in the Cook Islands, sous chef at Zico, an Italian place in Wellington, later holding the same position at the General Practitioner and at Hippopotamus.

In 2008 he headed overseas as executive sous chef at the Pacific Regency in Kuala Lumpur, but returned as head chef at Elements, a suburban restaurant in Wellington’s Lyall Bay.

By 2011 he is executive chef at Rydges and the next year at Dockside, before heading to the Maldives to the Centara Resort, a private island for high-end luxury travellers.

In 2014 he’s appointed to the top job at the Bolton where he has remained for one of the longer stays in his career to date.

A career highlight was being picked to join the New Zealand Chefs National team which competed for world honours in Singapore in 2018.

The team placed second in the final and second overall, the best result New Zealand had achieved in 25 years.

This experience plus being made Chef of the Year (also in 2018) and a World Chefs accredited Chef Judge made him an obvious choice to organise the judging panel for the 2021 Jeune Chef of the Year competition of the year, run biennially by the Chaine des Rostisseurs in New Zealand, says New Zealand country head, David Shackleton, “a job he carried out superbly.”

The way MacLean tells it becoming a chef was almost an accident.

“I watched cooking shows on TV as a kid, and I cooked dinners for the family – Alison Holst was my inspiration – but I never saw it as a career.

“I’d finished my BA in classical studies and I decided I wanted a change. Instead of doing an MA or some other course, I went to cooking school at Massey (completing a City and Guilds course – with distinction) and “really liked the immediacy, the creativity and the hierarchy and order involved in a kitchen.”

“My first job at Bouquet Garni was an epiphany. Tony Smith was the head chef, and while there I tried many things for the first time: Bluff oysters, balsamic vinegar and truffles among others.

“Later as a sous chef, I saw a lot of shouting and bullying in various kitchens, which I kind of enjoyed at first, but I decided later I didn’t like it and wouldn’t do it myself, and I don’t.

By about 2006, MacLean says he wasn’t sure where to go. “I knew I wanted to work in the best places. I was ambitious and impatient and I knew I had to get overseas experience.”

Hence the Cooks Islands, and then Malaysia and the Maldives where he was in a US$1000 night resort, which provided an all-inclusive experience for “a seriously wealthy clientele.”

As Executive Chef, MacLean spends about half his time on menu planning, portion and cost control, and training and supervising staff. The other half he spends as a regular chef in the kitchen working alongside the team.

“It depends on what’s going on, but I like to spend as much time as possible in the kitchen.”

Fiercely proud of his Scottish heritage, his name is an amalgam of the two sides of his family. Both are highland clans: MacLean on his mother’s side and Fraser of Lovatt on his father’s.

When he is not working MacLean likes to play with his children, Mila, aged 11 and Cato, 7. Both the kids play both football and cricket, so he is regularly caught up in transporting, standing on the sidelines and cheering them on, the routine so familiar to parents.

So, who feeds the kids? MacLean does. “Mostly me, and mostly in one pot. Mila loves lasagne. I use every shortcut possible; instant lasagne, pre-made cheese sauce, pasta sauce from a bottle, although I do cook my own mince.”

His other passion is brewing beer for which he has also won awards. No surprises there.

All roads to the Great Ocean Road pass through Geelong, once a bustling port and … END_OF_DOCUMENT_TOKEN_TO_BE_REPLACED

John Bishop is an experienced and widely published travel writer and broadcaster with a long career in journalism and public relations. His travel stories have been published in Stuff Travel, the New Zealand Herald, and in LawTalk (the journal of the NZ Law Society), by the apn chain of newspapers in Queensland, Australia, and by Rotary DownUnder, (the monthly journal of the Rotary movement in Australia, NZ and the Pacific). He has also broadcast his experiences in the Odyssey segment of Nights with Bryan Crump on Radio New Zealand. … END_OF_DOCUMENT_TOKEN_TO_BE_REPLACED