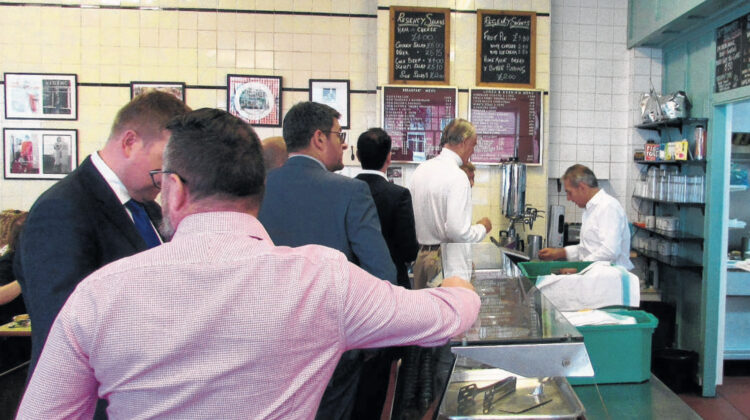 You know that the fry up is still ok when respectable national newspapers like the Daily Telegraph and the Daily Mail break away from endless coverage of the Royals and the fresh horrors of the political left to present features like “The Ten Best Greasy Spoons in London”.

They are joined by the much more populist Entertainment bible of London, Time Out, which regularly publishes similar article and reviews. Regardless of the debate about the health merits of this style of cuisine, it remains immensely popular in the UK, even if this style of cafe has all but disappeared from New Zealand’s main centres.

The classic British fry up, as presented in cafes and Band Bs up and down the land is bacon, sausages, eggs (almost invariably fried), baked beans (almost always Heinz) with toast, and often with additions like hash browns, mushrooms, tomatoes and black pudding, with some fried bread to mop up the residual grease.

These cholesterol-laden delights are an integral part of the B and B experience.

The so-called greasy spoons met a similar purpose; hearty and filling breakfasts for the workingman, particularly the man who has started early and is now taking a break. Nowadays the typical customer isn’t someone in overalls and a cloth cap. The customer could easily be a young city gent in a stylish suit, or a well-cut jacket and jeans with no tie. A notable feature is the relative absence of women.

That’s not quite true at the Regency cafe in Westminster, a short walk from Victoria Station

–once a working class area, but now very definitely one of the posher parts of London. It is also one of the best eating spots for a classic English breakfast at a very economical £5.50 ($9.75).

There are additions and variations: homemade hash browns, bubble and squeak, black pudding, omelettes. And there are burgers, sandwiches and rolls to go. Pies, pasties and pasta are available later in the day.

There is a ritual process. Queue up to order; sometimes the queue is out the door. Sit at Formica tables with plastic chairs. Pick up from the counter when your meal is ready.

The man who takes your money pours the tea, makes the toast, and calls your name when your order is up. The tea is the colour of teak, you could use the remains to varnish the woodwork.

On the table are the three sauces, tomato, brown and black, and vinegar, all in plastic bottles. Eat and look at the pictures of Spurs in their heyday (shortly after WWII). Also on the walls are the magazine covers (Vogue) and photo spreads that have been shot here.

The walls are tiled, the floor is lino, and the curtains, made of red gingham, cover only half the windows, a style popular in the 1940s. Pre- serving the 40s style authentically is a key to the charm of the place. The fashionable crowd of 30-somethings seem to love the place and their food.

Out in Bethnal Green, a genuine part of the East End and a decent tube ride away from Westminster is E Pellici. This small suburban eatery with its wooden panelling, low ceiling and pictures of the stars of EastEnders on the wall used to be the local hangout of the notorious 60s gangsters Ronnie and Reggie Kray. There are just 28 seats packed inside and a few more outside.

I order a full English: sausage, two strips of bacon, tomatoes, and a fried egg on white toast. It comes with a good strong cuppa. Late I take a cappuccino – the place is owned and run by Italians after all –and that’s pretty good too. All up, that’s £7.

This time there are genuine English workingmen in the cafe getting through breakfasts twice the size of mine. A local contractor has men working on the water pipes; I see the logos of an electrical company on the uniforms of another group. They are all chowing down happily.

It’s a family business: Dad at the counter directing traffic and taking money. Mum and daughter serving, clearing, wiping and talking to the customers. There’s a warmth in their smiles as they dish up hearty food.

My final visit is to Marie’s, a thoroughly authentic working-class cafe, although it is run by a Thai couple. It becomes a Thai restaurant in the evening and is recognised for the quality of its Thai food. No one comes for the decor.

I order the number 2 breakfast: 2 rashers of bacon, one egg with chips, beans and tea. With that comes a single slice of white bread, thickly sliced from a torpedo loaf, all for £4.90.

Here there is a babble of accents, cut-glass posh from a man intent on impressing his three female companions, Cockney, South London and two American girls from Minnesota there by accident while looking for Sherlock Holmes’ house.

Marie’s is at the side of Waterloo Station, in A designated street market. There’s been trading here since 1377. Locals stream in and out, eating, drinking, chatting and enjoying the morning sun while getting their stalls ready for customers.

Memphis, the biggest city in Tennessee, epitomises the old and new South of the … END_OF_DOCUMENT_TOKEN_TO_BE_REPLACED

Lyon is a gem of a city. Set on a hilly site, it's where the Rhône and Saône … END_OF_DOCUMENT_TOKEN_TO_BE_REPLACED

Travelling’s easier when people go out of their way to help. Three incidents … END_OF_DOCUMENT_TOKEN_TO_BE_REPLACED

John Bishop is an experienced and widely published travel writer and broadcaster with a long career in journalism and public relations. His travel stories have been published in Stuff Travel, the New Zealand Herald, and in LawTalk (the journal of the NZ Law Society), by the apn chain of newspapers in Queensland, Australia, and by Rotary DownUnder, (the monthly journal of the Rotary movement in Australia, NZ and the Pacific). He has also broadcast his experiences in the Odyssey segment of Nights with Bryan Crump on Radio New Zealand. … END_OF_DOCUMENT_TOKEN_TO_BE_REPLACED