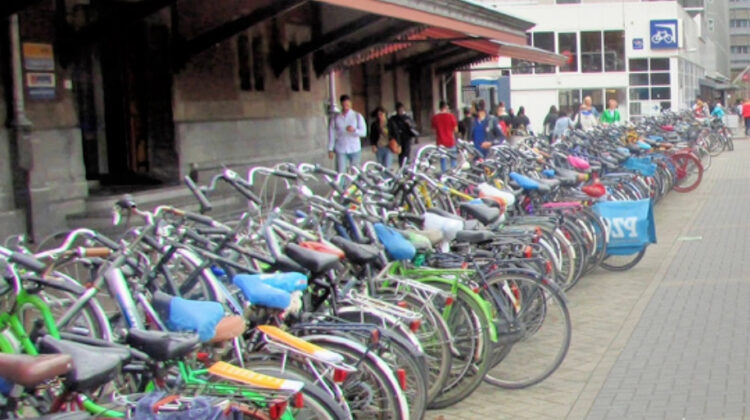 Amsterdam. The very name conjures up images of tulips, canals, trams, windmills, artists such as Rembrandt and Van Gogh, and yes, cyclists.

The Dutch are bike mad and proud of it. Seemingly, everyone has a bike, and they are ridden by all ages, all the time, and often in a very aggressive “we own the path” manner.

Amsterdam is often held up by public transport advocates as a modern, progressive city that accommodates cars, trams, canal boats, cyclists and pedestrians with ease, but the image is increasingly at odds with reality.

In fact, the cyclists are becoming a major drawback for tourists, and the civic authorities are worried that visitors are being put off by the behaviour of many cyclists.

The problems are numerous. There are more bikes than parking spaces despite the city council’s multi-million dollar investment in building thousands more spaces.

The bike lanes are said to be too small for the volume of cycle traffic. Providing wider lanes and more parking spaces has led to even more cyclists, but not to more manageable cycle traffic.

There is now an issue with over-size bikes, which have fatter tyres, large baskets front or back and don’t fit into existing cycle stands.

And then there’s the abandoned bikes. About 15% of bikes in bike parks are either abandoned or ownerless according to the city council. Thousands of bikes are dredged out of the canals each year.

And finally, there is bike rage, aggression and rudeness, which is frequently experienced by pedestrians who complain about the cyclists’ “we own the road” attitude. Incidents involving cyclists hitting other cyclists, or colliding with pedestrians are common.

I was in Amsterdam in July last year, the first time for many years, and our tour group were struck – literally – by the silent aggression of the bikers. After a couple of close calls and one very near miss that could easily have resulted in injury, one of our number referred to “the attack of the killer bikes”.

Back in 2012 the Dutch Cyclists Union was well aware of the problem.

“Problems all-too familiar to car drivers the world over, from traffic jams to road-rage and lack of parking, are now also threatening to turn the Dutch dream of bicycling bliss into a daily hell. In a small country where bicycles outnumber people by 1.2 million, the Dutch have simply run out of space to accommodate the five million cyclists who take to the road every day, turning commuting in major cities into a nightmare,” it noted.

After that Amsterdam (and other cities) spent multi-million dollar sums widening bike lanes, providing more bike parks, and adding safety features to the most dangerous bike lanes. Some of the bike parks are colossal and resemble graveyards more than parking spaces.

According to the Dutch newspaper Trouw, “bicycle rage was flying across the handlebars.

”By 2016 an official report was saying that the Netherlands’ cycle lanes were still overcrowded, ironically because, at least in part, the improvements in cycling infrastructure had encouraged even more people to “take the bike”.

SWOV, the Institute for Road Safety Research, said the Dutch lane system might be a model to other countries, but as bike paths filled to capacity during rush hour, crashes were becoming more frequent and bikers’ poor road habits were partly to blame.

SWOV set up cameras at four major bike lane inter-sections in The Hague, and recorded a catalogue of bad behaviour.

“Footage showed 20% of cyclists using their phones while riding – though most of these were listening to music rather that texting. A large majority of riders (80%) pulled out of lane to overtake without looking behind them, while 5% of riders went as far as cycling in the wrong direction entirely.”

In 2016 Amsterdam created the position of “Bike Mayor”, a voluntary position with support from the city council to liaise among the various cycling groups, other road users and the various civic and national authorities to sort problems.

Anna Luten, a 28-year-old brand manager with an international cycling company, and a keen cyclist herself, got the job.

The position copies that of “night mayor” who liaises between the purveyors of the city’s expanding night economy, and residents and officials who don’t like it, don’t want it, and would sooner it didn’t exist.

Incidentally, Amsterdam’s famous red-light district is considerably smaller than it was, but British stag and hen parties are still numerous.

It’s fashionable in some circles before a wedding for a bridal group or a grooms’ group to spend several days in a European city drinking themselves stupid and calling it a good time. Amsterdam is a top choice, along with Hamburg and Prague.

Anna Luten told the UK’s Guardian newspaper that with so many bikes (one million bikes for a population of 1.1 million) rush hour bike jams frequently forced cyclists to stop at every junction on major routes into the centre.

“For Amsterdammers it’s frustrating,” she said. “Some parts of the city are just too busy – there are too many bikes, too many scooters, too many cars, too many pedestrians. There’s no space. It is a big source of conflict.

”Later she told CityLab, an international magazine devoted to urban issues, her fellow cyclists had to clean up their behaviour.

“In Amsterdam we get on our bikes and we cycle everywhere. We go with the flow of traffic, we cross from left and right; that’s how we always commute. Cycling is almost too successful.

“Sometimes we have problems in the way we behave. Some Amsterdam citizens, they think they’re kings of streets when they’re on their bikes.

”According to Ms Luten, the key was getting the infrastructure right.

Many bikes but cars still dominant

There is an imbalance of space. While bikes account for an estimated 68% of journeys made in the city centre, they are allocated just 11% of infrastructure space, with cars getting 44%. Cycle parking is a problem that just keeps on keeping on.

One idea currently being looked at is for a massive underwater bike park right next to the city centre.

I personally witnessed an accident involving a cyclist who tried to race across a tram track while the tram was approaching. The tram hit the bike and sent the rider sprawling. Fortunately, neither suffered any serious damage, but within minutes three sets of emergency services including an ambulance were on the scene.

Passengers were told to get off the tram: it would not be going anywhere for at least an hour while authorities investigated.

The Dutch bike culture is facing at least three other challenges, particularly evident in Amsterdam.

The Dutch bike is getting bigger, which the Daily Telegraph reported as, “bicycles with crates in front of the handlebars, child seats behind the saddle – and pedestrians.

Are there solutions? Spending more on infrastructure would clearly help. Overall, Anna Luten is optimistic.

“People are coming to me with problems and I have the ears of those in power. I don’t have an opinion or a solution for everything, but it is about communication and city hall has been very receptive. We need to keep innovating or we’ll fall behind.

”One innovation may be covered bike lanes so business people can cycle to work in the rain with-out ruining their suits, or new signs to show tourists where to find safe cycling streets.

“Cycling has the power to transform. I dream and hope that in 20 or 50 years from now there could be more cities like Amsterdam, where cycling is so normal and accepted that we’re not really aware of it,” she says.

Travelling’s easier when people go out of their way to help. Three incidents … END_OF_DOCUMENT_TOKEN_TO_BE_REPLACED

All roads to the Great Ocean Road pass through Geelong, once a bustling port and … END_OF_DOCUMENT_TOKEN_TO_BE_REPLACED

John Bishop is an experienced and widely published travel writer and broadcaster with a long career in journalism and public relations. His travel stories have been published in Stuff Travel, the New Zealand Herald, and in LawTalk (the journal of the NZ Law Society), by the apn chain of newspapers in Queensland, Australia, and by Rotary DownUnder, (the monthly journal of the Rotary movement in Australia, NZ and the Pacific). He has also broadcast his experiences in the Odyssey segment of Nights with Bryan Crump on Radio New Zealand. … END_OF_DOCUMENT_TOKEN_TO_BE_REPLACED