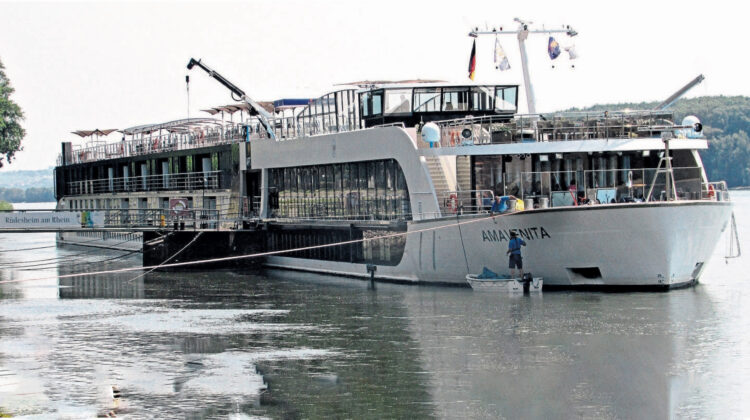 There are few things better in life than quietly drifting down two of Europe’s best-known rivers in comfortable surroundings, well fed, with plentiful supplies of wine and other drinks, rising each day to anew town and anew experience.

The river cruises between Amsterdam and Budapest along the Rhine and Danube rivers are Among the most popular trips for the over 60s from New Zealand and Australia. APT, Avalon, Royal Viking and others offer packages in boats similar in size and amenities. We chose APT, mainly because it offered a one-price deal, including all shore excursions.

Our fellow travellers were mostly Australians, a handful of Kiwis and half a dozen Brits. The Australians were mostly from the smaller towns and the country are as of Australia; self-made and retired people who value and can afford high levels of comfort, seeking pampering with touches of culture.

They were impressed by a standard programme of light classical music (Strauss with some Mozart) because it was held in an elaborate baroque palace in Vienna with high quality sparkling wine amid golden mirrors and enormous chandeliers. This is the set that drinks Baileys because they think it is sophisticated. There are three elements to a successful tour: the places you visit, the people you are with, and how you get around. APT scores highly on all three.

Certainly, the places you visit are compelling for any lover of history, those curious about art and culture, or just interested in the ways things were. The places you go are out of the textbook of central European history.

At the small town of Durnstein on the Danube is the castle where Richard the Lionheart was imprisoned returning from the Third Crusade, until his mother, Eleanor of Aquitaine, almost bankrupted the English Crow to raise his ransom.

We visit the stadium in Nuremberg where impassioned speeches. Now it’s a sports venue, but the dais he used is still there. Regensburg is described in the daily handout as “a perfectly preserved medieval city right on the banks of the Danube River and dominated by the spires of its impressive cathedral.”

Perfectly true, except that every town in Central Europe has an impressive church and A castle. The history of central Europe is riven by conflicts between Christianity and Islam, between Catholics and Protestants as the Reformation, the Counter-Reformation and then the Thirty Years War took their toll. And that’s before the ravages of Napoleon, two world wars and Russian occupation.

The riverboats are not like ocean cruises with their constant queues to disembark for day tours, for dinner, and to get to the bar or dessert table. Here food is in constant, endless and prolific supply.

So is alcohol. Beer, wines and spirits are Poured freely. Only the top-quality spirits and Champagne are charged for.

Tour Director Stuart Turner says the free alcohol policy works. “People know their own limits. Only once in three years have I had a problem with a passenger drinking too much.”

A typical day starts with a lavish breakfast. There are pastries in the lounge for late risers, and sometimes a snack before lunch, which can be a three-course sit down affair in the restaurant, or a lighter version (soup, sandwiches, rolls, salads and cake) in the lounge.

Dinner is always four courses and wine is local, usually varietals not found in New Zealand. Austrian whites can’t match our own, and quality German red is almost an oxymoron, although the red from the Rheinpfalz did impress.

Onboard are 158 passengers, old enough to be patient, well-travelled enough to be polite and civilised, and experienced enough to be ready on time, to get on buses in an orderly manner, to be back at the pick-up points on time, and to ask intelligent questions of the local guides.

The crew is a mixed group of nationalities. There is Boris the Bulgarian in the dining room. Olga from Croatia (originally from the Ukraine) is on reception. Turner is English, but the captain is Hungarian, and Roberto, the hotel manager, Italian.

On walking tours with local guides, we use Personal Quiet Vox transmitting devices. The guide speaks into a headset which transmits to earpieces worn by the passengers. Range is about 30m which means you don’t have to stand next to the guide to hear the commentary.

Standard rooms are small. The large, comfy bed takes up most of the room. Using a chair at the tiny desk blocks access across the room. But the sliding door opens right out to the sunshine and the river. The bathroom –with toilet, shower and hand basin is strictly one person at a time unless you are a contortionist.

I loved the trip. The area covered is deeply historical and full of compelling stories, too numerous to recount. You get enough detail from well-versed local guides, but as a history lesson it is still a bit once over lightly.

As a cruise experience, travelling on the river is smaller and more intimate than large ocean- going ships with hundreds, even thousands, of passengers. And you can take in as much history and culture–along with sunshine –as you want.

Lyon is a gem of a city. Set on a hilly site, it's where the Rhône and Saône … END_OF_DOCUMENT_TOKEN_TO_BE_REPLACED

John Bishop is an experienced and widely published travel writer and broadcaster with a long career in journalism and public relations. His travel stories have been published in Stuff Travel, the New Zealand Herald, and in LawTalk (the journal of the NZ Law Society), by the apn chain of newspapers in Queensland, Australia, and by Rotary DownUnder, (the monthly journal of the Rotary movement in Australia, NZ and the Pacific). He has also broadcast his experiences in the Odyssey segment of Nights with Bryan Crump on Radio New Zealand. … END_OF_DOCUMENT_TOKEN_TO_BE_REPLACED