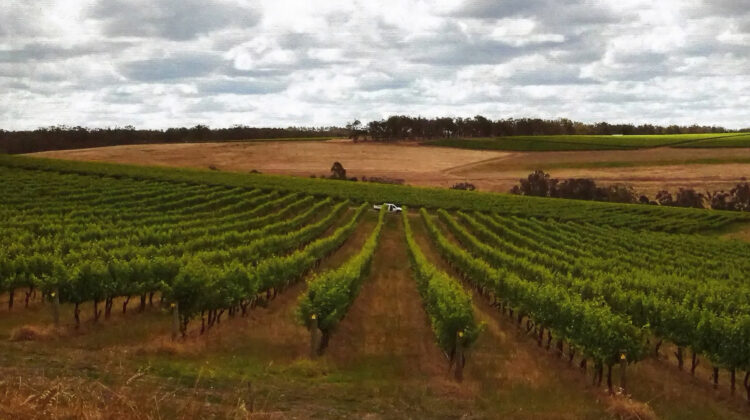 The Margaret River area to the south and west of Perth is the state’s playground. Famous for its wine and food, it also attracts surfers, fishers, and other recreators to its many prosperous towns.

Once just farmland with small dots of housing on the river or the coast, this part of Australia now bustles with traffic with towns like Busselton Dunsborough and Bunbury thriving as commercial and residential centres. There’s surfing all along the coast, although the rips are fearsome and sharks are not unknown. The roads are routinely clogged even if the beaches are still sparsely populated.

Kiwis have flocked there from the 1970s onwards chasing sunshine, surf, mining jobs and better opportunities. Western Australia is all very Australian, but not as aggressively so as the eastern cities.

The wine and food area is largely centred on the township of Margaret River, 272 kms or about 3-4 hours drive from Perth. West of the town, Caves Road runs north to south parallel to the coast, and is the main access road to the best wineries, the beaches, galleries, and the olive oil, cheese and chocolate places.

Visitors need a car to get around, although there are plenty of whole and half day tours.

The history of wine in south west WA is very recent.

The first vines were planted at Vasse Felix in 1967 and when its Riesling won a Gold Medal at the Perth Wine Show in 1972, planting in the region took off.

Nowadays the region is best known for two blends: Semillon/ Sauvignon Blanc (SSB in local wine parlance), and Cabernet Sauvignon/Merlot. The quality of the local Chardonnay and Shiraz is also impressive.

Two important features of the big w ineries; they make a big thing of their gardens and hospitality areas with water features, statutes and large concert areas where international artists perform regularly.

Secondly, the major wineries all have first class restaurants, and often informal cafes as well. Here are three of the best.
We lunched at Voyager as part of an all day tour. We enJoyed a flight of six wines: and you can pick one of those to accompany your lunch.

The house is Dutch Cape architecture from South Africa – high wooden beams, sloping ceiling, echoes of European hunting lodges. The food was thoroughly modern and delicious: bread with their own oil and dukkha and a choice of mains and coffee. Leeuwin Vineyard likes to associate its best wine with art and culture. For many years it has commissioned a group of disabled artists to design labels for its “art series” wines, and the labels are displayed in a viewing room downstairs. Its 2011 Chardonnay was rated fifth best in the world and is still drinking beautifully.

Vasse Felix’s Epicurean Tour gives a behind the scenes look at winemaking, a private tasting with gourmet nibbles, followed by a three course lunch with matching wines.

In contrast, the Cheeky Monkey, a brewery and cidery offers the three staples of Australian cuisine: burgers, pizzas and fried stuff. Driving around, it’s worth dropping into Gabriel’s Chocolate which specialises in single source chocolate.

Crack open the nut and taste the smashed up bean. Its taste is rather sharp and acrid. Then move onto the various samples laid out on plates from the least to most sweet. Sweetness is purely a function of how much sugar is added, the helpful guide tells me. Margaret River Venison is a standard stop on most tours, but anyone can go in. It’s stop, see, smell, taste, (a few times) buy and go. Their venison prosciutto is delicious, flavoursome, melt in the mouth stuff.

Olio Bellow claims to be Australia’s most awarded certified organic extra virgin olive oil manufacturer. In the tasting room visitors can sample 14 varieties of olive oil from the pure, to the fruit blended, to infused varieties.

The place has 10,000 olive trees under cultivation, and being all organic, is both a point of difference and a philosophy inherited from the founder of the place (now deceased.)

At Bettanay’s there’s wine and homemade nougat – again it’s on many of the local tours. They make nougats on the premises according to traditional methods. There are 27 different flavour combinations and they don’t mind hand ing out the samples generously.

The most impressive thing about the Margaret River Dairy Factory was the onion jam. The milder cheeses and the brie were nice, but it was the strong cheddar and the smoked cheese that kept me plunging my toothpick downwards into the bowl and then upwards into the mouth. The jam was a wonderful accompaniment.

A highlight in Margaret River was Yahava Base Camp. Yahava brews and sells high end coffee for the discerning. It’s owned and run by a bunch of mavericks from Wellington having a serious adventure.
They are dedicated to single origin brews, which give the drinker much more choice about how much strength, flavour and taste they want on any particular occasion.

Naturally they are confident that as tastes mature, customers will move from the ordinary to the more specialised brews, just as wine drinkers move from sparkling to medium whites and then to more complex reds.

The guys who run the company talk about delivering “an adventure in a cup.” They succeed.
Up the Swan River from Perth is Sandalford, one of the best and most picturesque vineyards in Western Australia. Sandalford grows a lot of its grapes in the Margaret River and processes them at its Swan River base. We went there on an all-day river cruise.

I learned that a single French oak cask to mature wine can cost $1,500 – $2,000 and is used perhaps three times. It seems the fashion for making unoaked whites is driven as much by cost as by consumer taste.

Down in Fremantle, Perth’s port, is the Shipwrecks Museum and a statue of Bon Scott, a local boy, once the lead singer for AC/DC, along with an interesting waterfront area rightly famed for its fish

and chips, and for the Little Creatures Brewery (tours and tastings available).
The Shipwrecks Museum is fasc inating with its stor ies of courage , desperation, of survival and disaster.

See a large chunk of the hull of the Dutch merchant ship Batavia which sank off the coast of Western Australia in 1629, and was retrieved in 1972, plus many relics and items retrieved from other shipwrecks.

Rottnest Island – Rotto to the locals – is Perth’s other main recreational area, and daytrippers flock there.
One thing that makes Rottnest a special place is the quokka, which looks like a large rat, but hops like a kangaroo.

Rottnest, has 63 beaches and 20 bays in 19 sq kms; none of them large and none of them overcrowded. Plenty of opportunities for snorkelling, paddle boarding and swimming. But be careful, there is not much shelter and no fresh water.

About 100 people live there permanently, but it receives 500,000 visitors a year, sometimes as many as 15,000 in a day. A hop on hop off bus runs circuits of the island all day.

One of the best things about travel is trying out things that you can’t do at home. The Perth/Margaret River area certainly delivers for couples and families.

Lyon is a gem of a city. Set on a hilly site, it's where the Rhône and Saône … END_OF_DOCUMENT_TOKEN_TO_BE_REPLACED

John Bishop is an experienced and widely published travel writer and broadcaster with a long career in journalism and public relations. His travel stories have been published in Stuff Travel, the New Zealand Herald, and in LawTalk (the journal of the NZ Law Society), by the apn chain of newspapers in Queensland, Australia, and by Rotary DownUnder, (the monthly journal of the Rotary movement in Australia, NZ and the Pacific). He has also broadcast his experiences in the Odyssey segment of Nights with Bryan Crump on Radio New Zealand. … END_OF_DOCUMENT_TOKEN_TO_BE_REPLACED