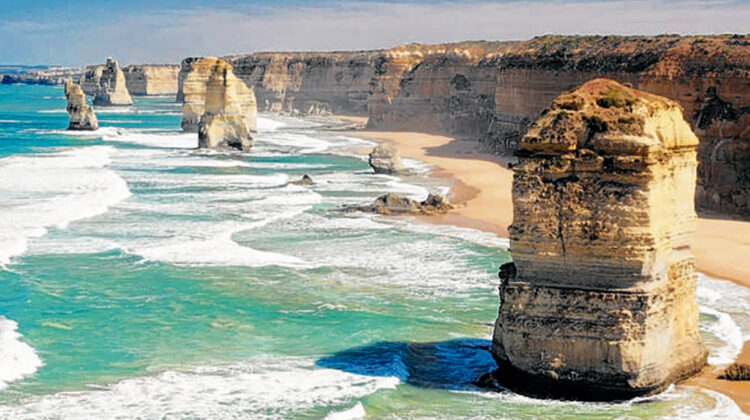 The Great Ocean Road is a 500km return drive from Melbourne to the wild windy coast and into the luscious hill country of Victoria.

I took four days to do the trip, although it can be done more quickly, and one and two-day bus tours will give you the highlights in less time.

From Melbourne travel west to Geelong, a lovely sea-side retirement town with along pier – evidence that it was once a bustling port before rail and road opened up easier transport options.

From Geelong the road goes southwest to Torquay and the various towns along to Port Campbell, where you swing north to Camperdown, a sleepy hollow of a place, before turning east and back along the plains to Geelong and Melbourne.

I took some friends’ advice and did the journey in reverse, heading first inland to avoid the holiday crush along the coast road – good advice as it turned out.

From Geelong to Camperdown is due west through good-looking farming country, mainly dairy and mainly green, with straight roads and easy driving. At Camperdown I turned south to Port Campbell, the first of my three overnight stops – the others were at Apollo Bay and Torquay.

Port Campbell, a small coastal town whose population explodes in summer, is a lovely spot with a nice bay and gentle beach, and motels, bars and cafes that are active in the summer but much less so in winter.

The apostles are eight (once nine, but never 12) piles of eroding limestone columns, standing up to 50m and rising out of the Southern Ocean about 50m to 80m offshore from the viewing platform.

The wild sea has carved out caves from the cliff face, leaving these majestic but crumbling columns surrounded by swirling waves and with crack sand fissures clearly visible.

They are certainly impressive but, arguably, not as eye-catching as the Grand Canyon, the Painted Desert, the Jung-frau or Mt Everest.

From the coast, the road winds into the hills of the Otway National Park – a nature reserve and adventure playground with many hikes, walks and adventures, such as high-wire walks and encounters with koalas and dingoes.

The soft, warm air is tinged with eucalyptus.

As we emerge from the bush and climb again, several times we reach hill peaks and see the panorama of a long coast with a long beach far distant. The Great Southern Ocean is wild and white-capped with rolling waves and it’s dangerous.

At Johanna Beach there’s a camping ground, with paths through the bush to a long, white, sandy stretch where people are relaxing in the sun and some are idly casting long rods into the sea.

There are no swimmers. They been warned off by the sign that the beach has rips, strong undertows and is too dangerous. At towns such as Lorne, Anglesea and Apollo Bay, the beaches are safe and crowded with holiday makers enjoying water sports by day and the old-fashioned carnival parks by night.

Take a ferris wheel, a ghost train ride, or throw balls into the mouths of clowns. Good old-fashioned fun. Construction of the Great Ocean Road started in 1919and 3000 returned servicemen spent 13 years living in camps along the way to finish it. Much more traffic was always coming towards me than going my way.

In Lorne, for example, the queue to enter the town in early January stretched back easily 2-3km and it was barely moving.

Going the reverse way around worked out well.

Travelling’s easier when people go out of their way to help. Three incidents … END_OF_DOCUMENT_TOKEN_TO_BE_REPLACED

Memphis, the biggest city in Tennessee, epitomises the old and new South of the … END_OF_DOCUMENT_TOKEN_TO_BE_REPLACED

John Bishop is an experienced and widely published travel writer and broadcaster with a long career in journalism and public relations. His travel stories have been published in Stuff Travel, the New Zealand Herald, and in LawTalk (the journal of the NZ Law Society), by the apn chain of newspapers in Queensland, Australia, and by Rotary DownUnder, (the monthly journal of the Rotary movement in Australia, NZ and the Pacific). He has also broadcast his experiences in the Odyssey segment of Nights with Bryan Crump on Radio New Zealand. … END_OF_DOCUMENT_TOKEN_TO_BE_REPLACED