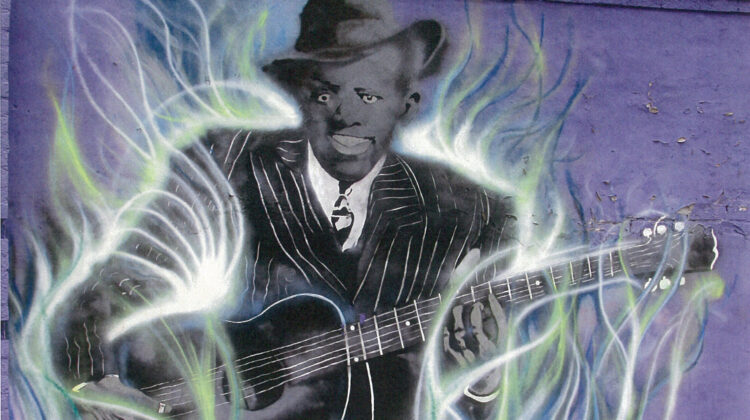 Quite a compliment from a living legend whose own status was marked out with “Clapton is God’ graffiti on buildings in the 1960s and 70s.

I have never found anything more deeply soulful than Robert Johnson,” says Clapton. “His music remains the most powerful cry that I think you can find in the human voice.”

While his songs and his unique playing style mark him 84 out, the real mystery is whether, and where, Johnson “sold his soul” to the Devil in return for his brilliance.

Johnson is now recognised as a blues pioneer, at least the equal of WC Handy, Bessie Smith, Leadbelly, and Muddy Waters, but is known to modern generations only through the two recordings he made, in 1936 and 1937.

This was the peak of his short career. He died in a cheap hotel in Greenwood, Mississippi in 1938, aged just 27, poisoned, it is said, by a jealous husband: a plausible explanation because he was quite a ladies’ man.

Wikipedia notes that “as an itinerant performer who played mostly on street corners, in juke joints, and at Saturday night dances, Johnson had little commercial success or public recognition in his lifetime.”

Nonetheless, his musical influence lives on through his unique playing style and the songs including blues standards like Sweet Home Chicago and Dust . My Broom which influenced many of the 6o’s generation of white blues musicians such as Cream, Fleetwood Mac and Led Zeppelin.

Cream’s version of the Johnson song Crossroads was a crowd favourite at their concerts. Led Zeppelin’s Lemon Song also takes a lyric from that track: “You can squeeze my lemon ‘ti! the juice runs down my leg”.

Johnson was born in May 1911 in Hazelhurst, Mississippi, and moved to the Delta in 1919. He learned to play harmonica well enough, but he was hopeless on the guitar. As a young man, he loved to hang out in the juke joints in the town where black musicians played.

Strictly speaking, the Delta is only the small part of northern Mississippi immediately south of the border with Tennessee with the town of Clarksdale as its centre. At Clarksdale is the junction of the area’s two main roads and the railhead.

Anyone moving north to Memphis, St Louis or Chicago came through Clarksdale, and hence it had a thriving music scene -particularly for the blues, explains Maie Smith, the head guide at the Blues Museum in Clarksdale.

Ike Turner came from Clarksdale and was prominent in blues and rock’n’roll circles in the 1950s -way before he teamed up with Tina.

Maie Smith says that during band breaks Johnson would get up on stage and play guitar and sing.

“But he sounded so terrible. He couldn’t play, he didn’t know how to play, so (legendary blues musician) Son House would shoo him off, and the last time, that he went up to try and do this, Son House hurt Robert Johnson’s feelings so much he disappeared for a period of time. No one knows how long exactly.

“When Robert Johnson came back to the Delta, he sounded so great that Son House started this myth that the boy had had a supernatural experience because there is no way anyone could learn to play that well that quickly.”

Even in Johnson’s own short lifetime the story had got about that the incident had happened just outside Clarksdale where highways 49 and 61 meet -the so-called “crossroads”.

Johnson never denied the story. And, something of a showman, he reinforced the myth with his song Cross Road Blues which also channels common African-American folk tales and legends, like fear of the night.

“The very idea of a ·crossroads’ is where important things happen, people meet, talk, trade and do business. There aren’t many in the broad flat plain called the Delta, says Maie Smith.

Johnson married in 1929, but his wife died in child-birth. Blues historian Robert McCormick quotes a rel-ative as saying his wife’s death was divine punishment for singing secular songs, a practice known as “selling your soul to the Devil”.

In Cross Road Blues (written in 1936) Johnson laments being lost and alone with darkness approaching, but there is no mention of an encounter with the devil or where he was at the time.

Johnson is something of a local industry in the Delta. On the main road into Clarksdale where those highways now meet, there is a display of three guitars with the words ‘crossroads’ in recognition of the legend.

Incidentally, this is the Highway 61 where Bob Dylan had such a bad motorcycle crash in 1967 while researching the blues down south. It is memorialised in his seminal 1968 album, Highway 61 Revisited, where he is pictured with his motorbike.

Maie Smith says both highways have moved since Johnson’s time.

She says the guitar sign is on the main road through town because it’s a convenient place for tourists to find.

“It’s easy for them. That’s their major stop. You can see people any time of the day taking photos.”

While in Clarksdale I went to the original intersection of the two roads. There is no marker of any kind, just two narrow, barren roads by a railway line next to some industrial waste land -unattractive, unappealing and hard to find com-pared to the guitar signs on the main road into the town.

Nor is Clarksdale the only town to claim Johnson and the Crossroads. In Cream’s version of the “Crossroads” song Clapton sings ‘Tm going down to Rosedale, take my rider by my side.”

This led the 6os generation of blues fans to think the soul-selling encounter with the devil incident took place at Rosedale, a small town 63km south-west of Clarksdale.

To prepare the song for recording by Cream, Clapton simplified Johnson’s rhythm to a uniform 12 bars per verse and imported the Rosedale reference from another Johnson song, “Traveling Riverside Blues”.

This is the version of “Crossroads” that the kids of the 1960s heard, and Rosedale has capitalised on that.

The version favoured by the Crossroads Blues Society in Rosedale relies in part on a vision which appeared to a bluesman called Henry Goodman, later documented by writer Rolf Potts: “The crossroads, the one and only crossroads, where the Delta Blues emerged as a manifest entity in the person and music of Robert Johnson is at the south end of Rosedale where Highway 8 intersects with Highway 1. This will be disputed, as some people will dispute that Robert Johnson ever even made a deal with the devil.”

There is nothing to see at that intersection and Rosedale itself is well off the beaten track. As small towns go, it is deeply unappealing. In his short life, Johnson provided no clues to account for his much-improved style, although one story has it that he took guitar lessons in Alabama after Son House had chased him away from the Mississippi area.

Another has him learning from another itinerant bluesman, Isaiah Zinnerman, in graveyards where they could practise undisturbed.

So what was the new style? Maie Smith says, like Jimi Hendrix to come, “Johnson had very long fingers, he could bend notes and make it sound like he had a bass player, or more than one guitar player with him on stage. Sounded so great, people just couldn’t believe that this young man had become an awesome guitar player.”

Those who believe in such things 86 say the devil called him home. The real argument is over not whether but where the selling of the soul took place. There is historic, tourist and musical value in mounting a plausible claim.

Whatever the merit of the competing claims Maie Smith says having the “crossroads” on the edge of town is “a great version for Clarksdale.”

And as the major town in the area, with the main road and the best signage it gets most of the benefits available from the legend of Robert Johnson.

Lyon is a gem of a city. Set on a hilly site, it's where the Rhône and Saône … END_OF_DOCUMENT_TOKEN_TO_BE_REPLACED

John Bishop is an experienced and widely published travel writer and broadcaster with a long career in journalism and public relations. His travel stories have been published in Stuff Travel, the New Zealand Herald, and in LawTalk (the journal of the NZ Law Society), by the apn chain of newspapers in Queensland, Australia, and by Rotary DownUnder, (the monthly journal of the Rotary movement in Australia, NZ and the Pacific). He has also broadcast his experiences in the Odyssey segment of Nights with Bryan Crump on Radio New Zealand. … END_OF_DOCUMENT_TOKEN_TO_BE_REPLACED