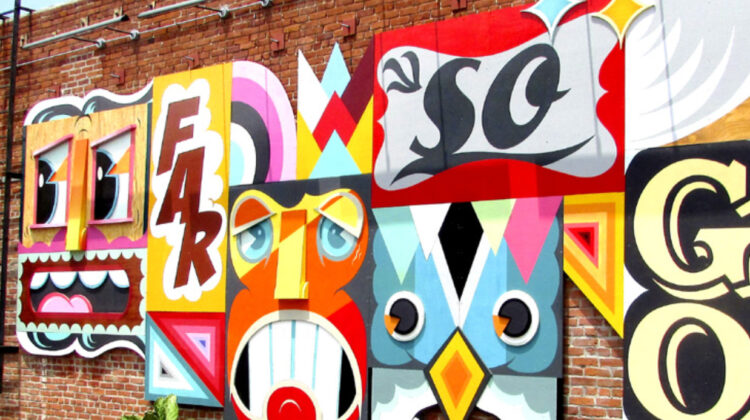 It’s got a great beach, a thriving high-tech culture, is a haven for creatives, and fosters all manner of bohemian, hippie and laidback lifestyles. It still sees itself as the epitome of California cool.

Today Santa Monica is connected to Downtown LA by rail.

The link opened in May 2016, one part of a massive multi-billion dollar investment programme by the Metropolitan Transportation Authority. Soon, the MTA boasts it will be possible to move freely around the greater LA area without a car.

Not yet, but Santa Monica has bike lanes and it’s pedestrian friendly, although the crossing signs are bossy – barking at you to wait and then repeating the command in steadily mounting volume.

Muscled lads in tight shorts and bikini-clad women riding or skateboarding from Malibu to Venice Beach through Santa Monica are visual clichés of the area.

I took a street art tour with The Bike Centre, and rode south with my guide Cherra.

Along the way I saw Google HQ, the BuzzFeed and SnapChat offices and examples of street art by Chase (who seems to have pioneered the style) and the famous Jesse Hazslip.

This is not random graffiti placed by taggers – rather, art by painters and designers who use buildings as their canvas. Some of it is political and much of it is social commentary in some form.

Much of the street art is commissioned by shop owners like New York’s Dog and Bone who have a stylish beach scene entitled “So Far So Good” on the outside wall of their shop.

On the tour I get to see the famous canals in the area and as we cycle through Muscle Beach to Marina del Rey I get to visualise what life was like here 30 years ago, when this was a chilled-out ‘hippie’ town.

The apartment buildings and shopping areas close to the beach are still the same – a bit battered, the frontage unkempt at times, the paintwork looking like it needs a scrub and a touch up.

Santa Monica also operates a bike share scheme (500 bikes in 75 locations) and the buses have racks out front for carrying bikes.

Wednesdays and Saturdays there is a farmers’ market – much of it organic produce – two blocks from the centre of town.

The pier was the town’s first major attraction. In the Prohibition era of the 1920s it was used to embark passengers to large ships in which, sitting outside the 12 mile limit, guests could drink and gamble legally.

The pier is also the end of the legendary Route 66, the ‘mother road’ as John Steinbeck dubbed it. Running from Chicago to Los Angeles, thousands of migrants and settlers travelled across it in the 19th century in search of a better life, a phenomenon repeated in the dustbowl years of the 20th century, typified by the Joad family from Steinbeck’s Grapes of Wrath.

Today bikers and nostalgia buffs seek out the parts of the original road still in existence, and hundreds of tourists visit the pier each day to be photographed under the sign. In Paris one goes to the Eiffel Tower; in Santa Monica one goes to the pier. It’s what you do.

More recently the pier featured as the end point of Forrest Gump’s run across the country. He reaches the sea, pauses and turns around to run back. There is no plaque but the Bubba Gump restaurant on the pier does a good trade in seafood and T-shirts. The modernised Ferris wheel is solar powered and a ride gives a great view of the whole beach area. Equally impressive is the view from nearby Huntley Hotel.

Ride up to the penthouse levels to look over Santa Monica township and up to the Hollywood Hills and towards Downtown, and also to the sea and sunset. People come for the view and stay for the excellent cocktails and nibbles from the house bar.

Certainly, the beach itself is spectacular – long, wide and sunny with a gentle breeze and good surf, fringed with older-style wooden houses now worth several million dollars (and traded rarely).

This is where bohemians lived in the 1940s. The artistic crowd and movie set moved in, in the 1950s and 60s – druggies and surfers too – and now with the train connecting directly to Downtown the complaint is that the beggars and street people are finding it too easy to get here.

In Tongva Park, a wonderful green space directly across the road from the beach, they are found stretched out on park benches in the sun, while children frolic in the fountains.

The whole atmosphere of the place reflects the laidback vibe of California beach life. More than 600 restaurants in a 22 square kilometre area, with much eating and socialising done outdoors.

It takes serious money to live here, and there’s a fair amount of NIMBYism (Not In My Backyard). The community is aggressive about protecting its special lifestyle; the usual accoutrements of casual living – fast food and burger joints are not to be found. I located (by accident) a small McDonalds in a lane off a main street, but no KFC, no Wendy’s, no Burger King.

And there are tough restrictions on smoking in public – tougher than California in general.

But it’s not difficult to spend big money here on food and accommodation, or shopping – all the big brands have shops here and there are lots of boutique places.

There’s old New York-style full service eating houses like Ivy at the Shore which has been there since the 1930s – even the artificial flowers are drooping.

Blue Plate Oysterette has great seafood (including New Zealand oysters) and Misfit is a large bar/restaurant with a very comfy atmosphere. Then there is the vegan/ vegetarian side: Rawvolution, which had been at the centre of the raw food moment when it began here 10 years ago (though very recently closed down) but most restaurants offer several vegetarian options: if we didn’t “we’d go out of business, or come under heavy social pressure,” one server told me.

The Hive is a hot spot for nutrient-rich organic juice blends, smoothies and bowls of vegan goodness. Bulletproof showcases the benefits of butter coffee, and Erven is a plant-based new American cuisine restaurant.

Jackfruit is an item found on lots of menus in Santa Monica. It looks like a very juicy and sweet kiwifruit, but weighs in at 20kg. Often it’s served sliced with cabbage and guacamole, or as a filling for tacos. There’s ‘Green’ accommodation too.

Shore Hotel is the newest addition to Ocean Ave. The LEED Gold certified property has ocean views, a pool and a green conceirge – the hotel’s own local expert on all things eco-friendly.

Travelling’s easier when people go out of their way to help. Three incidents … END_OF_DOCUMENT_TOKEN_TO_BE_REPLACED

John Bishop is an experienced and widely published travel writer and broadcaster with a long career in journalism and public relations. His travel stories have been published in Stuff Travel, the New Zealand Herald, and in LawTalk (the journal of the NZ Law Society), by the apn chain of newspapers in Queensland, Australia, and by Rotary DownUnder, (the monthly journal of the Rotary movement in Australia, NZ and the Pacific). He has also broadcast his experiences in the Odyssey segment of Nights with Bryan Crump on Radio New Zealand. … END_OF_DOCUMENT_TOKEN_TO_BE_REPLACED