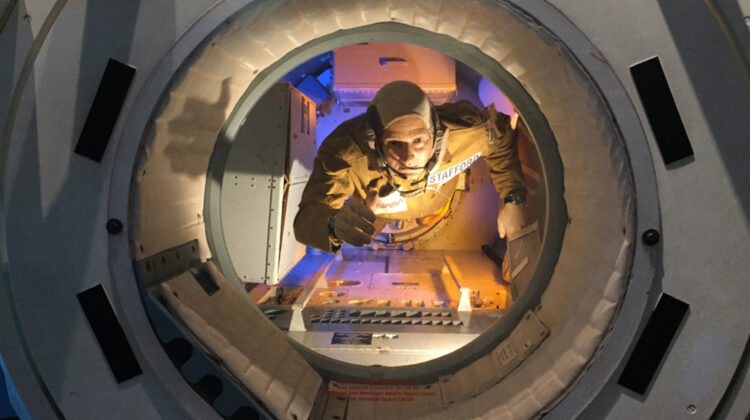 Houston claims the honour of its name being the first word spoken on the moon. Remember what Neil Armstrong said: “Houston, the eagle has landed.”

It is still the Texan city’s most visited attraction with over a million visitors a year. Thousands of kids, parents, teachers and school parties pour through each day, taking in Mission Control and the displays and exhibits.

The Space Shuttle and International Space Station displays and the retrospectives from the first space misions in the 1960s are well presented and interesting. I thought the control room a little disappointing – seeing it on television was way more exciting than seeing it in real life.

There is a show about getting to Mars and beyond, which has a certain propaganda value for NASA. “Getting to Mars will be hard but NASA is up for it,” the mission briefing officer told his audience.

Houston is well rated as a business centre. It scores highly on ease of starting a business, assistance avail-able to get started – which doesn’t include tax breaks or subsidies. It also rates well among its residents on liveability scores: there’s good housing and good public schools, green spaces, support for the arts, culture and recreation. It is politically progressive, racially mixed and tolerant.

The pillars of commerce here are the energy sector – over 2,000 companies operate out of Houston, many listed on the NYSE or the NASDAQ; the space industry, arts and culture and more recently education, medical research and technology and treatment.

It is the largest city in the United States by total area, 1,620 square km, and the fourth most populous city, with an estimated population of 2.3 million in 2017.Geographically it resembles a large circle and with a hub and spoke system of freeways emanating from downtown, supplemented by ring roads.

Ideally you need a car to get around and only 8% of households don’t have one. Yes, there is public transport, but it’s limited. There are trams downtown in and around the theatre district (the second biggest in the US after New York).A 2017 Rice University study found a majority of Houstonians favoured dense housing in a mixed use walkable setting over low density single family housing.

Traffic congestion was also cited as the city’s most pressing problem. There is a bus service: 1,200 buses service 75 routes and is used by 275,000 riders a day. I took lots of Ubers as the most efficient way to get around.

The major department stores and their shoppers aren’t downtown. Unlike Chicago with Michigan Avenue or New York with Fifth Avenue, you don’t go downtown to shop for clothes, furniture, whiteware or other big ticket items. Do that in the suburbs.

A special feature of downtown is Houston’s system of underground walking tunnels which connect the massive skyscrapers. The tunnel system has eight routes (not all connected together). It covers 95 city blocks six metres below the streets for a total distance of just under 10 km.

There are shops and cafes in the tunnels. All the entrances are in city office blocks which are closed at night.

The tunnels are climate controlled, a literally “cool” way to get around away from the blazing Texas heat.

Blue haven in a sea of red

In August 1836 a group of land speculators founded Houston where the Buffalo Bayou meets the White Oak Bayou and named it after General Sam Houston, the commander of the Texas army which won independence from Mexico earlier that year.

Houston was the first and third President of the Republic of Texas, later to become a US Senator after Texas joined the Union in 1845, and at the end of his life he was its Governor.

Politically, Houston is a blue spot (meaning Democratic Party) in a red state (Republican). Democrats have hopes of taking the state blue in this year’s presidential election. It hasn’t been blue in a presidential contest since Carter won it (and most of the rest of the south) in 1976. Since Reagan beat Carter in 1980 Texas has been reliably Republican.

There are lots of green spaces, notably Buffalo Bayou Park, a 65 hectare big green lung in the city which is widely used by walkers, riders, and recreators generally.

There’s lots of greenery, water, and places to sit and reflect. Cities need places like this. It’s run by a special trust and funded by a dedicated tax and corporate philanthropy.

In the park I went on a tour of the old water storage and pumping system, which held two million gallons – enough to supply the city’s needs in its early days. Now it needs up to 500 million gallons per day and the city’s water is held in three lakes with a capacity in the hundreds of billions of gallons.

Once underground, our party walked along the path running around the top of the storage area, which is sometimes used for art installations and to record music. There is also a 17-second echo in the chamber. We all yelled loudly on cue and listened intently and with pleasure to the sound we had created.

They all go together here. I went to an Astros baseball game. There was so much other entertainment going on, the game was almost incidental to the crowd’s enjoyment. As it was Mothers’ Day some of the Houston-born players had their mothers out on the mound throwing balls to them.

Then there was the “kiss camera” which roamed around looking for couples and putting their image up.

on the big screen. That demanded a big, public smooch carried out to loud cheers, catcalls and general whoopie.

And there was singing. Deep in the Heart of Texas was a singalong number. Words were on the screen but the crowd knew both tune and words. And the Yellow Rose of Texas too. No emotional lever was left unpulled.

Beers, hotdogs, popcorn, pizza, all the trashy food imaginable. How could you not like this place? The Astros played the Cowboys from Dallas and slaughtered them much to everyone’s delight.

Out the back of the stadium is Houston’s party central, several sprawling hectares of dried out industrial land converted into an endless stream of bars.

One I visited was called Truck Yard, a primitive industrial space turned into an outdoor beer and food venue. I suppose it had niche appeal, which is to say that no one would call it classy.

Families were kicking back in the sun at wooded trestle tables with umbrellas, or at round metal tables with metal chairs on the bare ground with some stones for traction. On stage a singer was grinding out her tunes to an audience only lightly listening.

Food was available from three food trucks: Brazilian, hotdogs and waffles, with a steak and cheese counter next to one of the two bars. Someone was cooking up crawfish in a big pot.

I had some gaucho fries from the Brazilian truck which were standard French fries with diced sausage and chipotle sauce sprinkled with spring onions and parmesan. Nice enough, but it would have been better if the fries had started out hot.

Talking of food, Texas barbecue and fried chicken are dietary staples here. For barbecue I went to Goode Co. These guys have been doing it for a long time. It shows in the quality of their food and in the aged, even shabby, nature of their premises.

The specialities are beef brisket, ribs and sausages, although there is chicken, pork and other stuff on offer as well. I had a beef brisket sandwich at $7.95 on jalapeno bread. It came with a spicy tomato dipping sauce; you help yourself to pickles and chillies. Biting into the soft white bread and the melt in your mouth brisket was just a delight.

For chicken I was pointed to Max’s Wine Dive – the name is a complete misnomer. This place is famous for its fried chicken so that’s what I had. I got three huge pieces of chicken sealed and tender with collard greens and mashed potato. The greens were like industrial strength spinach and I found them hard to get down in quantity.

There was also a slice of what was called Texas toast, but it was just white bread toast, and nothing to get excited about. Lots of 80s music playing with craft beers on tap and a wide selection of wines in a bar atmosphere. Combined with massive servings of chicken, it was a winning formula.

Houston has joined Chicago (with New York soon to be added) as inland destinations with direct, but lengthy, flights from Auckland. This makes it a convenient entry point for travellers heading to the South, or south-east of the United States as well as an interesting place in its own right.

All roads to the Great Ocean Road pass through Geelong, once a bustling port and … END_OF_DOCUMENT_TOKEN_TO_BE_REPLACED

John Bishop is an experienced and widely published travel writer and broadcaster with a long career in journalism and public relations. His travel stories have been published in Stuff Travel, the New Zealand Herald, and in LawTalk (the journal of the NZ Law Society), by the apn chain of newspapers in Queensland, Australia, and by Rotary DownUnder, (the monthly journal of the Rotary movement in Australia, NZ and the Pacific). He has also broadcast his experiences in the Odyssey segment of Nights with Bryan Crump on Radio New Zealand. … END_OF_DOCUMENT_TOKEN_TO_BE_REPLACED