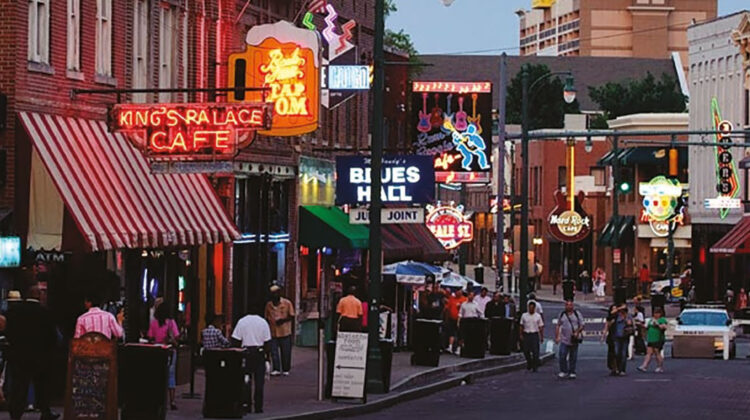 In Memphis’s famous Peabody Hotel there is a “Blues” marker declaring that this is the start of the Blues Highway.

There are nearly 200 markers, mainly in Mississippi, and some in neighbouring States. They are placed by the Mississippi Blues Trail Commission, a State body set up to provide information about notable blues figures from the past.

Incidentally, the Peabody Hotel is famous for its trained ducks who parade through the lobby twice daily, and have done so since the 1920s. (There are new ducks every six months and duck is not served in any form in the hotel.)

Strictly speaking, Memphis should be the end of the Blues Highway, as those who travelled it headed north from the Delta and other parts of Mississippi in the 1920s and 1930s, through the town of Clarksdale, which was then the road and railhead for northbound travellers going on to Memphis, St Louis and Chicago.

The road is, of course, the famous Highway 61, well recognised as the road to opportunity for people leaving Mississippi. Back then, Highway 61 went from New Orleans to Canada, passing the birthplaces of many notable blues musicians, including Muddy Waters, Son House, Elvis Presley and Charley Patton.

The “Empress of the Blues”, Bessie Smith, died from injuries from a motor accident on Highway 61, and where 61 and Highway 49 meet is where the legendary Robert Johnson is said to have sold his soul to the devil. Bob Dylan’s first all-electric album Highway 61 Revisited pays tribute to that legacy.

I travelled the Blues Highway in 2015, starting in Memphis with a visit to Graceland, the home of and memorial to Elvis Presley, and by touring Sun Records where Elvis made his famous recording of “That’s All Right, Mama” in 1954.

I also visited the Museum of Rock and Soul, and Stax Records, both providing fine accounts of the rise of rock ‘n’ roll and soul from their origins in country, blues, rockabilly and other influences. Hours can be spent here, headphones on, listening to the music of the ’50s and ’60s when rock was young. Stax artists included Otis Redding, the Staple Singers and Isaac Hayes, when the label was the voice of new black consciousness.

If country music is the white man’s lament about his plight, then the blues is the black man’s story.

It’s recounted every night in the bars and clubs along Beale Street in Memphis. The street operates like a large street party. The central part is blocked off to cars, and under State law you can carry open liquor in the streets.

Many of the street’s bars have window sales: purchase and move on. Standing outside open doors is close enough to hear the performers inside. Cover charges are generally low – perhaps $5 – and often nothing at all.

BB King’s Club is on the corner and is well known, and there are other BB King Clubs in New York, Nashville and Orlando. Born Riley B. King, he played in Beale Street as a young man and was known as the Beale Street Blues Boy, which was shortened to BB.

Clarksdale, about 120kms south of Memphis on Highway 61, is historically important in its own right, although it is hard to see that now, given the rundown condition of the town. The Blues Museum there is a very good one and has, among its many exhibitions, a replica of the cabin Muddy Waters was born in.

The chief guide is Maie Smith, who demystifies the Robert Johnson story for me.

Johnson was a powerful figure in the history of the blues and played around the Clarksdale area in the 1920s. Eric Clapton calls him “the most important blues musician who ever lived”. Johnson was OK on the harmonica, but hopeless on guitar; so bad that at clubs when he tried to play during the regular band’s breaks he would be chased off the stage.

The story goes that he disappeared for a while – how long is disputed; a few weeks, perhaps a couple of years – but when he returned, he had a powerful new guitar style.

Maie Smith says that “When Robert Johnson came back to the Delta, he sounded so great that (prominent local bluesman) Son House started this myth that the boy had found God, because there is no way anyone could learn to play that well that quickly”.

Johnson added to the mystery with his song “Cross Road Blues”, which has him sinking down on his knees in despair at his plight as the sun goes down… “Lord, save a poor boy if you please”.

The trade of soul for talent supposedly took place at the junction of highways 49 and 61, and conveniently there is a sign to that effect on the main road into Clarksdale. Just one problem: that’s not where the two roads crossed back in the 1920s. Both roads have been moved, and the old roads now have new names.

“The ‘crossroads’ when Robert Johnson walked this earth was what are now called East Tallahatchie and Martin Luther King streets,” she says. Maie says blues tourism is an important source of income for the town, so why make it hard for people to find what they want?

The town of Rosedale, a few miles further south and west, also claims the “crossroads” based on the lyric in Cream’s version of the song – “I’m going down to Rosedale” – but the Rosedale reference is not in Johnson’s original and was, in fact, Clapton’s embellishment, with the line coming from another song altogether.

Remember the Black and White Minstrel Show, where performers used to “black up” in an exaggerated imitation of Negroes? Popular on television in the 1960s and 1970s, but now regarded unfavourably and even racist, it is perhaps surprising to learn that blacks as well as white entertainers practised the style.

A remarkable black American musical troupe called The Rabbit Foot Minstrels toured the South from the 1920s through to 1950 from their headquarters in the small town of Port Gibson on the road between Vicksburg and Natchez in Mississippi. They often performed material that mocked black people’s beliefs and gullibility.

The troupe included the legendary blues singer Ma Rainey. They played cabaret, country and jazz. Ma Rainey claimed she first heard the blues performed by a young girl in a tent in a fairground in 1902. Later she converted to the blues and became a pioneer of the style.

Just some of the many fascinating features of a journey through the past, but where the music and its influences live on in the present day.

Travelling’s easier when people go out of their way to help. Three incidents … END_OF_DOCUMENT_TOKEN_TO_BE_REPLACED

John Bishop is an experienced and widely published travel writer and broadcaster with a long career in journalism and public relations. His travel stories have been published in Stuff Travel, the New Zealand Herald, and in LawTalk (the journal of the NZ Law Society), by the apn chain of newspapers in Queensland, Australia, and by Rotary DownUnder, (the monthly journal of the Rotary movement in Australia, NZ and the Pacific). He has also broadcast his experiences in the Odyssey segment of Nights with Bryan Crump on Radio New Zealand. … END_OF_DOCUMENT_TOKEN_TO_BE_REPLACED