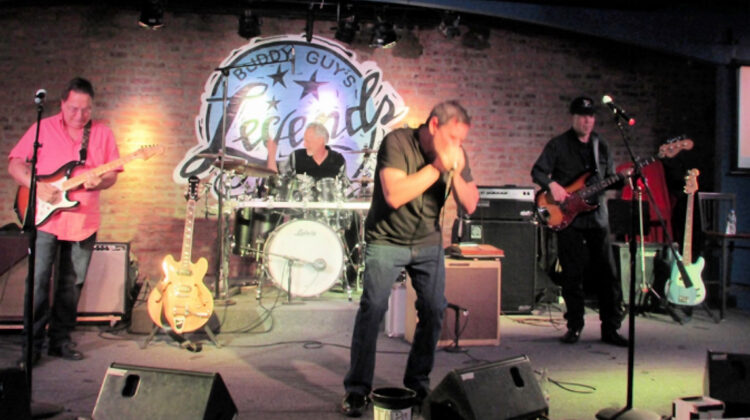 Chicago, America’s self-styled second city is a special place defined by four factors: the magnificence of its buildings, as the cradle of electric blues, its long history of gangsterism and its blood brother political corruption, and its rather special food – deep dish pizza and the Chicago hot dog.

On a quest to get a feel for all those elements I found one common factor: Chicagoans do stuff their way.

Take the Chicago pie: now called deep dish pizza, but it wasn’t called that until the locals tried to win a nationwide pizza competition in the 1940s (it didn’t work).

I tried the thick crust pizza at Gino’s East, one of Chicago’s oldest pizza parlours. It is just a simple tomato sauce with melted mozzarella on a dough base containing oatmeal, which makes it more like a shortcrust with the crust coming up the side of the dish to give it a pie-like appearance and taste.

The contrast with the thin crust New York-derived-from-Naples style margherita pizza crisped and even slightly burned, with a light covering of sauce with some cheese and basil, is obvious.

In New York pizza is street food, large triangular slices which are impossible to eat elegantly. The Chicago pie is a sit down knife and fork experience.

I thought the Chicago style was tasty and quite filling, but ultimately unappealing because it had no variety.

Authentic doesn’t always mean interesting, particularly when it comes to working class food, where the challenge is always to make a little go a long way and to make the unappetising as appealing as possible. (Ketchup, for example was originally much stronger because it was invented to disguise the taste of decaying meat).

While pizza eaters debate the respective virtues of thick and thin, my tour guide told me that even in Chicago thin crust oversells thick crust by four to one.

Another contrast with New York and evidence of Chicago going its own sweet way is the story of the hot dog.

What happened was that each of the great ethnic traditions in Chicago – the Irish, the Germans/Poles and the Italians – had their own style of hot dog.

In the 1940s and 50s the search was on for a food marketing symbol for the city. No ethnic community was willing to surrender their hot dog in favour of the other guys.

The New York hot dog is just a frankfurter in a bun with some sweet mustard squirted over it. The Chicago dog is a work of art.

A white sesame seed bun with a Vienna beef sausage and then seven additives (some say they must be put on in this order, others are less fanatical). The bun is steamed, and the sausage is boiled.

In her A Love Letter to the Chicago-style hot dog, food writer Julia Kramer says:

“You want the mustard, relish, and onion to come into close contact with the dog, so add those first. Then nestle in the pickle spear on one side and the tomato wedges on the other. Garnish with sport peppers and hit the whole thing with a few dashes of celery salt. That’s what we refer to as ‘dragged through the garden,’ and none dare call this salad.”

None dare use ketchup either. To ask for it, or add it, is to invite social disgrace.

I ate at Portillo’s, consistently rated as one of the best hot dog joints in town. They also sell burgers, sandwiches, pasta, fries, and a host of other stuff. You can even get a beer with your food, and the place is always busy.

Certainly, all the additives lift the hot dog beyond the ordinary, particularly as the soggy bun and the rather bland sausage add little to the range of taste sensations. So often in life the combo is better together than any one item alone.

Another great ethnic tradition that the Italians brought to the city is the meat sandwich – meat in a thick bread roll – dipped in jus and then cooked. It comes out still a bit soggy and sloppy, but that’s the way it is meant to be. I enjoyed one of these at the very traditional and rather famous Italian Village restaurant on Mother’s Day.

I took mine dry, but you can have it wet or very wet, which is why the aged wooden tables are covered with butcher’s paper. I left unconvinced that this was a major advance in the culinary arts.

One special feature of Chicago is its architecture which is best seen from the river, and there are cruises aplenty. Running around both sides of the river is one of the city’s most prized possessions – a walking and biking track about a metre wide which is permanently open to the public even as it passes lavish homes built to the water’s edge.

On the river cruise the commentary tells of the devasting effect of the Great Chicago Fire of 1871 but also of the fantastic rebuilding opportunity.

The city invited the leading architects of the day to design buildings of distinction and the big corporates competed to have the most striking designs.

The practice continues, and the result is a stunning skyscape, and the establishment of Chicago as the city where the modern skyscraper was invented. Many of these are inside “The Loop”, the central business district defined by the elevated railway that circles the area.

Down Michigan Avenue, known as Miracle Mile, is the John Hancock Building, Chicago’s tallest (the Trump Tower is second), and on the top floor there is a bar.

Ninety-three stories up, drink in hand and looking down on the helicopters landing on the roofs of lesser buildings is interesting.

From the 1870s onwards Black Americans started moving up from the South of the United States seeking better jobs and leaving racial discrimination and prejudice behind. They were only partly successful, but they brought their music with them – blues and jazz.

In the 1940s a fresh wave of migration post World War II brought electric blues to the city in the person of Muddy Waters, Howlin’ Wolf and many others. They lived on the south side, the poorest area of the city, but rich in music.

That tradition is still alive, and the club owned by the legendary guitarist Buddy Guy is at the centre of it.

The blues clubs are attracting an audience which is predominantly white, male, middle class and middle-aged, and with a distinct feel of the tourist about it. Hardly an African-American in sight in the audience.

The night I was at Buddy Guy’s listening to a good band playing some kickass blues, a bus load of tourists arrived and were shown to tables. They order their one drink paid for as part of the package, and about an hour later, they stand up and depart as quickly as they came.

The position at the Blues Room a few nights earlier was similar (although no tour bus). Middle aged white guys with a smattering of younger couples made up the audience.

In both cases the music was authentic; but the experience was more about meeting tourist needs than embracing the vibe of what the blues meant to so many people in the city.

Organised crime has long had a place in Chicago. Political corruption, which is gangsterism made legal, is an even bigger problem.

Legendary journalist the late Mike Royko documented the ways the “machine” – the name given to the Democratic Party operation which controlled the city from the 1930s to the present day – worked its magic. Capone and its fellow gangsters were amateurs com-pared to those who run the political machine in the city.

The machine had precinct captains and ward heelers, often on the city payroll doing nothing jobs, but whose real jobs were to sort out citizens’ problems (which often involve passing some cash to the right people) and turning out the vote on election day.

In his book Boss, Royko gives a simple example of how opponents (Republicans and other trouble-makers, sometimes from within the Democratic Party) are kept in line.

In one election a restaurant owner erected a large sign endorsing the opponent of Mayor Richard Daley. The precinct captain asked him to take it down. He refused.

The next day he was asked again and still he refused. The third day the building inspectors came and ordered a raft of repairs before the restaurant could open again. It cost him thousands of dollars. The sign came down.

The first Mayor Daley was asked on one election day whether he had any advice for the voters. “Yes”, he said. “Vote early and vote often.” Every election the dead voted in their thousands, and people who hadn’t voted, often found later that they had. That’s the Chicago way.

All roads to the Great Ocean Road pass through Geelong, once a bustling port and … END_OF_DOCUMENT_TOKEN_TO_BE_REPLACED

John Bishop is an experienced and widely published travel writer and broadcaster with a long career in journalism and public relations. His travel stories have been published in Stuff Travel, the New Zealand Herald, and in LawTalk (the journal of the NZ Law Society), by the apn chain of newspapers in Queensland, Australia, and by Rotary DownUnder, (the monthly journal of the Rotary movement in Australia, NZ and the Pacific). He has also broadcast his experiences in the Odyssey segment of Nights with Bryan Crump on Radio New Zealand. … END_OF_DOCUMENT_TOKEN_TO_BE_REPLACED