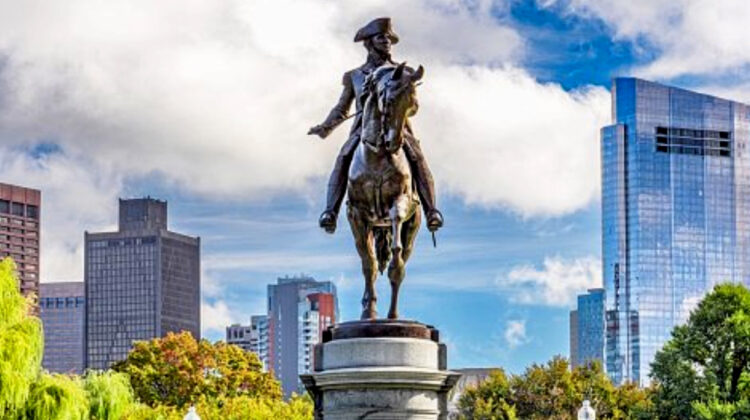 Boston’s Freedom Trail walks you around the sites of the events that make Boston the cradle of the American Revolution, although Philadelphia and other places do play a part.

Take your map and walking guide and start at the Boston Common, a beautiful swathe of green in the heart of the city, and admire the State House built between 1795 and 1798. Now with a gold-leafed dome, it is the seat of state government.

Down the road is the Park Street Church, the scene of much social agitation over many years. William Lloyd Garrison made the first major attack on slavery here in 1829. More recently the church has agitated in favour of gay marriage.

Next to the church is what’s left of the Granary Burial Ground where Revolutionary leaders such as Samuel Adams, John Hancock and Paul Revere lie.

At King’s Chapel is the box pews, where families could sit together and typically brought pillows and blankets (and the family dog) for warmth.

Benjamin Franklin was a Bostonian before he moved to Philadelphia, and his statue is easily found outside Old City Hall, which housed city government until 1969.

In School St, there is the Old Corner Bookshop where literary and public figures gathered, and the Old South Meeting House where the first meeting to protest the British imposed tax on tea was held, a movement that culminated in the Boston Tea Party.

On December 16, 1773, Samuel Adams, a local leader, addressed a meeting of 5000 and when he gave the signal the ships in the harbour were seized and the tea dumped overboard.

Close to this is the Old State House, the oldest public building in Boston (1713) from where the Declaration of Independence was read on July 18, 1776.

Adams’ statue is outside Faneuil Hall, which was historically a trading post and still is, but now with higher end tourist products and an information centre on the Freedom Trail, and the Black Heritage Freedom Trail, another interesting walk in itself. Behind the Hall is a large modern market and restaurant complex called Quincy Market. Inside the two halls small vendors dispense clam chowder, oysters, lobster, classy seafood to eat or to go, pizza, sushi, stir fries, curries, Thai and at least six other national cuisines.

A block away there is a stone circle marking the Bos- ton Massacre where on March 5, 1770, 12 British soldiers fired on a crowd of protesting citizens, killing five.

Equally honoured is Paul Revere’s House a few blocks away in the North End, and the Old North Church, where the lanterns warning of the route by which the British were advancing were hung, which in turn sparked Revere’s famous ride to warn of the troops approaching to arrest various leaders and to seize an armoury.

The American militia assembled and using those arms defeated the British in the Battles of Lexington and Con- cord, the first major exchange of the War of Independence. Later the American poet Emerson described the first shot fired by the Patriots at the North Bridge (in his poem Concord Hymn) as the “shot heard round the world”, al- though this is also attributed to the shot that killed Arch- duke Franz Ferdinand at Sarajevo in July 1914 and the term is now more generally as a metaphor for cataclysmic events.

Lyon is a gem of a city. Set on a hilly site, it's where the Rhône and Saône … END_OF_DOCUMENT_TOKEN_TO_BE_REPLACED

Travelling’s easier when people go out of their way to help. Three incidents … END_OF_DOCUMENT_TOKEN_TO_BE_REPLACED

John Bishop is an experienced and widely published travel writer and broadcaster with a long career in journalism and public relations. His travel stories have been published in Stuff Travel, the New Zealand Herald, and in LawTalk (the journal of the NZ Law Society), by the apn chain of newspapers in Queensland, Australia, and by Rotary DownUnder, (the monthly journal of the Rotary movement in Australia, NZ and the Pacific). He has also broadcast his experiences in the Odyssey segment of Nights with Bryan Crump on Radio New Zealand. … END_OF_DOCUMENT_TOKEN_TO_BE_REPLACED