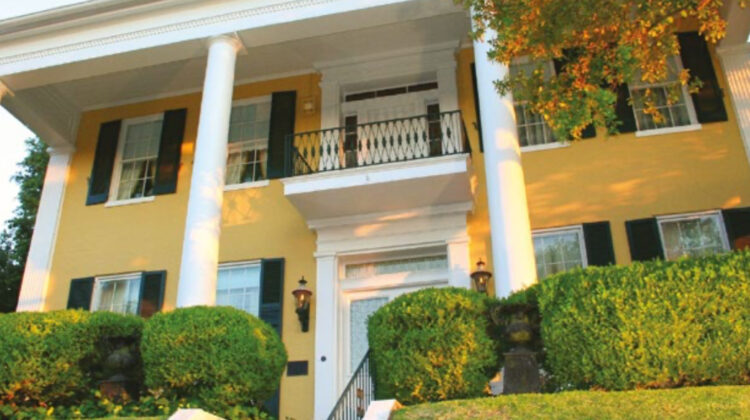 The houses are concentrated in Vicksburg and Natchez, two towns on the Mississippi River, made rich by “King Cotton” and “Queen Sugar”, the two crops that flourished in the rich river soil and made white plantation owners and their families rich, and brought prosperity and the trappings of civilisation to the South over a period between 1820 and 1860.

Natchez was one of the wealthiest cities in antebellum America, and according to the local visitors’ centre, “It is a treasure trove of extravagant architecture and interiors, preserved by your support”.

The “your support” is important.

In 1932, the ladies of the town organised the first of what they called “pilgrimages” for people of the North to visit Natchez to see the glories of the South, namely the grand houses and the gardens where they lived. It was their contribution to combatting the Depression-era conditions and to defraying the cost of maintenance on their mansions.

The project has been very successful, and now a trust owns many of the best properties, organising tours and visits.

Three of the best known, each displaying different characteristics, are Stanton Hall, Longwood and Anchua in Vicksburg.

Anchua means “happy home” in the language of the Choctaw Indians who lived around Natchez. It now operates as a small guest house, where guests can take their ease in the various parlours.

The family that built the place has died out, but the last descendant, a Mary Lou Halperin, does the commentary on the welcome video that visitors see in the ladies’ parlour, the first stop on the self-guided tour.

It’s rosewood mahogany chairs and occasional tables; silk damask curtains; and in the dining room, the original lights, which once burnt whale oil, are now powered by electricity.

The stained glass on the stairway has the original leading, with gold and mercury colours in the glass. The gentlemen’s parlour has a beeswax candelabra, added in the 1880s, and the lace is all French from the Empire period (1850-70).

The house began as a two-storey wooden structure in the 1830s, but was extended with brickwork in 1846.

Stanton Hall is one of the grandest houses in Natchez.

Construction began in 1857 for Frederick Stanton, a cotton farmer and broker who inconveniently died in 1859 only a few months after its completion. It’s described as a palatial Greek Revival style residence, with Corinthian columns and cast-iron railings. “Marble mantelpieces were imported from New York, ornate gasoliers from Philadelphia, and immense mirrors from France.”

The sweeping carriageway leads to a grand covered entrance four metres wide, and a cavalier statue stands in the hallway; interesting, because the battle between the North and the South is frequently depicted by the South as one between stylish, flamboyant, romantic Cavaliers and dour, pleasure-resistant, Puritan Roundheads.

Artie, our guide on the tour, says it was built for “show and entertainment”. The hall is five metres wide and 23 metres long; rooms have a near five-metre stud. Off the hall are a library, dining room and several lounges for before and after dinner, for the ladies and for business.

One interesting feature in the massive dining room is a wine box holding a dozen bottles, which is lined with metal and zinc to maintain the wine at a constant temperature.

Post the Civil War, Stanton Hall survived as a private girls’ boarding school for 17 years, and is now on public display.

The story of Longwood, which would have been the grandest of the grand, is the story of a man, Dr Haller Nutt, who owned five plantations and wanted to flaunt his wealth more lavishly and more extravagantly than anyone else in a town where white plantation owners made a point of outspending each other.

The start of the Civil War interrupted the building, and it is still uncompleted. He died in 1864, broken and bankrupt. His octagonal Italianate mansion with a Moorish dome was never finished. Tools and materials lie uncovered, undusted and unassembled, just as they were left 150 years ago, while visitors look bewildered at what might have been, but never was.

The guide’s narrative tries hard to engender sympathy for Dr Nutt’s widow, Julia, left with eight children and no income, and no doubt her fall from the peak of society to farming cows and selling eggs was devastating. She and her children lived on in the only completed part – a large, nine-room “basement” at ground level.

It is part of the complexity of the Southern story that after the Civil War compassion for the formerly high-living plantation owners was in short supply. The Federal Government broke up estates, gave land to the African Americans and didn’t pay compensation. In many cases the economic and social lot of the freed slaves did not improve much, as they swapped physical slavery for the economic slavery of sharecropping to make a living.

There were many slaves at Longwood, living in what the guide describes as the “servants’ quarters”. One of them, a house servant, was a particular favourite with the children. He has his portrait on the wall, but there is no name given.

John Bishop is an experienced and widely published travel writer and broadcaster with a long career in journalism and public relations. His travel stories have been published in Stuff Travel, the New Zealand Herald, and in LawTalk (the journal of the NZ Law Society), by the apn chain of newspapers in Queensland, Australia, and by Rotary DownUnder, (the monthly journal of the Rotary movement in Australia, NZ and the Pacific). He has also broadcast his experiences in the Odyssey segment of Nights with Bryan Crump on Radio New Zealand. … END_OF_DOCUMENT_TOKEN_TO_BE_REPLACED