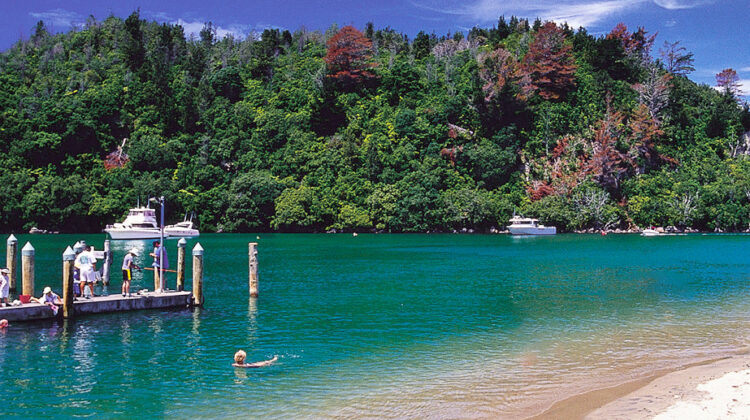 Whangamata is my favourite beach resort, mainly because during the summer months it combines reliable weather with good swimming and there are enough shops and other attractions to hold the interest of visitors and holidaymakers.

The Maori name ‘vVhangamatii.’ comes from the words ‘whanga’ which means bay, and ‘mata’, that means a hard stone, referring to the obsidian (or volcanic glass) that regularly washes up on the beach.

The town lies between two rivers, the Wentworth to the north and the smaller Otahu to the south, while at the northern end of the town is a marina based in the Wentworth estuary. This opened in 2009 after considerable local controversy and subsequent legal action.

Jan Bartley, one of the two Councillors for the ward covering Whangamata for the Thames Coromandel District Council, believes that any previous concerns about the marina have “vanished”.

For example, he says there were worries with regard to local birds such as the oyster catchers. “Now there are more oyster catchers around than there ever were before. You can see them every day perching on the breakwater”

It also seems that changes in the tides which the breakwater was supposed to induce haven’t occurred.

The marina now provides moorings for up to two hundred yachts and pleasure craft and the area around the wharf at the head of the main street has been developed into a lovely place for young children to paddle and splash without waves.

Since the marina was built, membership of the Whangamata Ocean Sports Club, situated right opposite the wharf, has taken off to reach over seven thousand members.

General Manager Phil Keogh says that four to four-and-a-half thousand are out of towners, and the rest are locals. The club rooms are right at the wharf, and “our restaurant has an excellent chef and great team;’ Phil says.

“We run two of the largest fishing tournaments in New Zealand.

“There’s the Nauti Girls, which is the largest fishing competition for women, with over six hundred entrants this year.

“And the Al Homes Classic that is run over three days with five hundred entrants – anglers and big-game fishers.

“This attracts quite a lot of serious fishing types.

“We are heavily into tag and release, and the club is also backing a ban on catching crayfish for two years to allow the species to recover:’ he says.

The marina was intended to provide a major economic boost to the town, but Councillor Bartley says that while tl1ere are no obvious downsides, the economic benefit of the marina is harder to see.

“What we see is about two hundred berths with yachts and boats in them, but only a small number of vehicles at any given time (outside the summer period). There’s no detrimental effect on the town, but no evidence of a positive imp act either:’

Leading local accountant Jere my Mace agrees the marina has not been a game changer.

“I couldn’t say that the marina has made a difference. If it wasn’t there, the town would still be pretty much like it is now;’ Mr Mace says. Each summer the town explodes with extra visitors, taking the normal population of nearly four thousand to around 15- 20,000 people, so much so that the police typically draft in extra officers, close streets and keep a watchful eye on proceedings over New Year. Not that there has been any trouble for many years.

However, this influx is only a short-term event, and in recent years visitors have been visiting the town for shorter periods.

The holiday season used to be from a week or so before Christmas until about the last week in January but now it seems to last only from a few days before Christmas to just after New Year when there is a noticeable exit, followed by a second major exodus about two weeks later.

By the end of January, although holidaymakers and travellers are still around, the town is noticeably quieter at this time of year than it was 10 or even five years ago.

This has prompted the local council and residents to spend money on facilities within the town and to further develop events throughout the year in a quest to attract visitors, most notably at high profile events such as the Beach Hop, a hot-rod and custom-car carnival held around the end of March/Easter period.

The Beach Hop can pull in several thousand people, and although many are day trippers from Hamilton, Tauranga, Rotorua and the like, many others come and stay longer.

However it’s water, whether for swimming or fishing that is Whangamata’s main attraction.

For visiting families, the town’s beach and water activities, including surfing, recreational fishing, scuba diving, and sea kayaking, provide the chief reason for holidaying in Whangamata.

Family and group fishing day-trips, charters and deep-sea fishing are all available from Whangamata as well as other venues within the Coromandel peninsula.

Whangamata’s beach is safe for young children, has good surf, and is patrolled by volunteer lifeguards.

The Surf Lifesaving Club runs popular learn-to-surf classes, and behind its clubhouse is the community park where concerts and children’s activities are staged in summer months.

In an expand ed shed in the park behind the surf club at the southern end of the beach, visitors will find Blackies, one of Whangamata’s iconic eating places.

Lunch at Blackies is a must-do experience. Blackies’ food isn’t gourmet, but it is well made and popular. Burgers, pizzas, salads, chips, and all the usual options are on the menu. Ice creams, shakes, smoothies and coffees are served to foot traffic via a separate sales window and there’s even a water bowl for dogs and a shady spot for man’s best friend.

Also the southern end of the beach is the estuary of the Otahu River, an area of tidal mudflats with a fast-moving current.

At the right time of the day, it can be pleasant to sit on the banks and enjoy the soft water flowing by – as many families do – but take care to choose your times carefully. Paddleboarding up the river is also popular. There is car parking on the edge of the estuary.

Wild life watchers will be pleased to note that the beach also has signs drawing attention to roped off areas where endangered dotterels are nesting and hatching chicks in the dunes.

It’s not far to the other beaches, Waihi and Whiritoa to the south, and Onemana, Pauanui and Whitianga to the north.

The area also offers plenty of walks and treks with varying levels of difficulty to enjoy. One easy walking track takes you from the local campground to Wentworth Falls. The track follows an easy grade alongside the Wentworth River, crossing two bridges before climbing to a good view of the falls.

If walking and lying in the sun on a beach isn’t your thing, there’s an 18-hole golf course on the edge of town and a 9-hole course in the centre of town.

Fitness enthusiasts can try the local gym while other, less strenuous indoor activites could include a visit to the local cinema.

Open only during the summer period, the cinema has four or five sessions a day, screening a carefully selected programme of current movies – children’s and family fare in the daytime and more serious adult-oriented material in the evenings

For bookworms, there’s also a privately-owned library while more social types may be tempted to visit one of the public houses and bars located within the town.

There are now several up-market apartments as well as motels, and an active caravan park and camping ground in the town.

The shopping centre is the largest in the area, and there is a wide range of places to eat Oliver’s Bakery and cafe and the Six Forty Six Cafe on the main street meet the needs of the big city bourgeoisie from Hamilton and Auckland who flood the town centre over Christmas and New Year. Oliver’s is the bread of a French-trained baker, and the ficelles, baguettes, crisp rolls and fancy loaves are a measurable step up from competitors.

While the bread is excellent, Oliver’s pies, filled rolls, sandwiches and pastries move quickly too and customers arriving after 11am run the risk of being met with empty bread bins.

With all the usual amenities, Whangamata is no longer just a summer beach resort but also now something of a retirement town, recent population growth being spurred on by retirees who have purchased or built homes on the slopes above the town.

Rob Williams, Chief Executive of the Thames Coromandel District Council, feels very positive about the opportunities offered by the region. “It’s a great place to do business – full of innovative people with can-do attitudes. And it’s a place that people outside the region are recognising as a great place to invest in. Unemployment is at 2.8 per cent, a ten-year low and lower than the average for New Zealand”.

He says key transport links – State Highways 25, 25A and 26 (the roads around and across the Coromandel Peninsula from Waihi on the east coast and Thames on the west) – are in need of attention, and that unsealed roads as well as existing single-lane bridges also need upgrading to improve accessibility for visitors and the local community. The area’s roads have suffered from under-investment as witnessed by long battle to replace the aging Kopu bridge at Thames.

There are two roads into the town. Travellers from the south – Bay of Plenty and further south – generally go to Paeroa and then through the Karangahake Gorge to Waihi on the east side of the peninsula and turn north for Whangamata (and then Whitianga).

Those coming from Waikato and further north have a decision to make as they approach Thames; travel north along the western side of the peninsula and cross the hilly spine of the peninsula to come out at Tairua , then track-back south to Whangamata, or take the gorge route as used by those arriving from the south.

Councillor Bartley would like the town to be more than a retirement area, but admits the challenges are substantial.

He wants more small-scale enterprises in order to attract more families to the town, as that would help sustain local schools and the volunteers that every community needs.

He also concedes that Whitianga is far ahead of Whangamata in offering inducements like designated warehousing areas and other support measures to attract new businesses to the area.

We have stayed regularly at the Marine Reserved Apartments, situated one block back from the beach and opposite the park (the site of Blackies) – just one of the reasons why we keep coming back to Whangamata year after year.

All roads to the Great Ocean Road pass through Geelong, once a bustling port and … END_OF_DOCUMENT_TOKEN_TO_BE_REPLACED

John Bishop is an experienced and widely published travel writer and broadcaster with a long career in journalism and public relations. His travel stories have been published in Stuff Travel, the New Zealand Herald, and in LawTalk (the journal of the NZ Law Society), by the apn chain of newspapers in Queensland, Australia, and by Rotary DownUnder, (the monthly journal of the Rotary movement in Australia, NZ and the Pacific). He has also broadcast his experiences in the Odyssey segment of Nights with Bryan Crump on Radio New Zealand. … END_OF_DOCUMENT_TOKEN_TO_BE_REPLACED