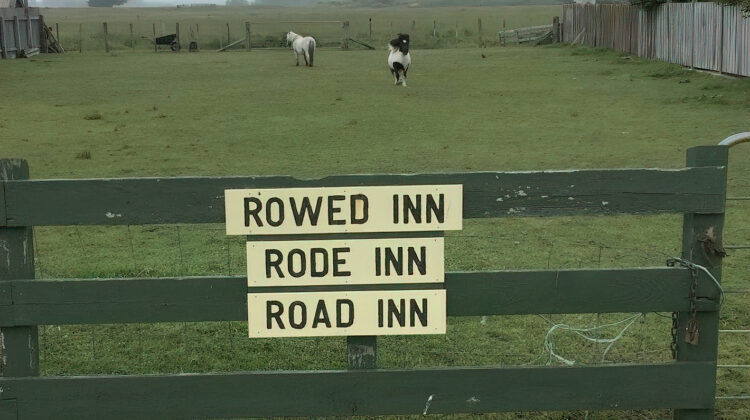 At the small settlement of Scotts Ferry, southwest of Bulls, almost everyone is part of the “Inn” crowd.

That is, they have a sign on their house or at the gate with the words “Inn” and a play of their own name or their favourite activity. For example, the Nixon family has a sign saying “NICKS INN”.

And up and down Parewanui Road, there are plenty more signs like that. So you get N2RELAX INN, BREEZE INN, RETYRE INN, BACK INN, TUNE INN, LIVE INN, SHOOT INN, HEV INN, and the triple whammy of ROWED INN, RODE INN, ROAD INN, and more.

Resident Bill Gray said the quirky naming started after the 2004 floods which swept through the settlement. A stop bank on the Manawatū River collapsed and deposited sludge up to two metres deep in most houses along the road.

Gray chaired the community committee at the time and is still known as the “mayor” locally, although he’s now aged 83 and has no official title.

“My wife and I took control of things trying to find out where people were. Some had been evacuated, some had not. Some had gone and returned, no one really knew what was going on,” said Gray.

“So, we decided that if you were back you could show that by a sign out the front of the property and that’s how the ‘Inn’ thing was born.

“We thought it would be a fun thing for a couple of months, but it’s stuck and is still going 16 years later. It cost nobody anything really. We had some spare paint and people used that,” said Gray.

The signs are “just something you do around here” a young lad who lives at “Who’s Inn” tells me. Almost everyone has an “Inn” sign.

“There are two or three standouts from the crowd, for no real reason, but that’s OK,” said Gray.

There’s more to Scotts Ferry than just the “Inn” crowd.

The settlement now known as Scotts Ferry is 16.1km down the road from Bulls, heading south-west to the coast. Heading down that road puts the Rangitīkei River on your left, the south side of the road.

On the other side of the river and heading into the settlement of Tangimoana, where the spy satellite station is located, is Scotts Ferry Rd.

The road through Scotts Ferry is Parewanui Rd. No wonder there was confusion when the emergency services came to the rescue of residents in 2004 as many vehicles went to the wrong side of the river.

“You have to say Parewanui Rd not Scotts Ferry,” said Gray, in order to get services to go to Scotts Ferry.

The backstory is that the original settlement was to be on the south side of the river.

The Canadian surveyor who was laying the area out for settlement back in the 1920s planned a settlement on the south side to be called Okanagan, a Canadian Indian word. It never caught on. Neither did the settlement which was moved to the north side of the river, its current location.

It takes its current name from the man who ran the ferry across the river back then.

Today the settlement has a camping ground, a windswept beach, and a row of houses almost all with “Inn” words.

All roads to the Great Ocean Road pass through Geelong, once a bustling port and … END_OF_DOCUMENT_TOKEN_TO_BE_REPLACED

Travelling’s easier when people go out of their way to help. Three incidents … END_OF_DOCUMENT_TOKEN_TO_BE_REPLACED

John Bishop is an experienced and widely published travel writer and broadcaster with a long career in journalism and public relations. His travel stories have been published in Stuff Travel, the New Zealand Herald, and in LawTalk (the journal of the NZ Law Society), by the apn chain of newspapers in Queensland, Australia, and by Rotary DownUnder, (the monthly journal of the Rotary movement in Australia, NZ and the Pacific). He has also broadcast his experiences in the Odyssey segment of Nights with Bryan Crump on Radio New Zealand. … END_OF_DOCUMENT_TOKEN_TO_BE_REPLACED