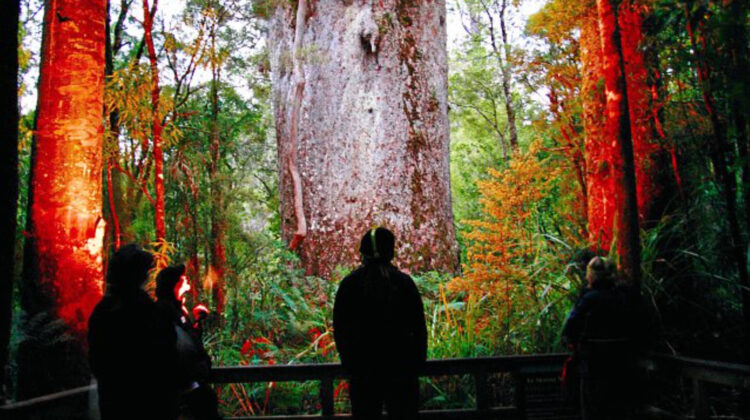 A small group of us are in the Waipoua Forest, in Northland, New Zealand, in the country’s largest stand of native kauri trees, including the big daddy of the them all, Tane Mahuta, the lord of the forests in Maori mythology.

We are guided by Koro Carman, founder of Footprints Waipoua, a tour operator that takes visitors into the forest at dusk and exposes them to the Maori creation stories while walking through the forest in darkness.

Wide easy walking tracks, a warm jacket and bright torches aside, it is still a mystical experience.

We are standing at the base of Tane Mahuta, 16.41m around, 51.2m tall, carbon-dated at around 3000 years old. He’s still alive and growing, although slowly.

Just take a moment, Koro says, and we stand in the complete darkness, torches out, in total silence, unmoving in the still night air, the colour of the forest barely distinguishable from the starless sky.

The only sound is the slow wind in the high canopy moving the branches just a bit. I easily imagine faces in the trees like the Ents in Lord of the Rings films.

“We are only said to be alive in those moments when our hearts are conscious of our treasures,” says Koro with feeling, unknowingly quoting Thornton Wilder, the Pulitzer Prize winning American play- wright and author. No one says another word.

A few minutes later, Koro’s deep male voice shatters the mood with a loud burst of Maori. It sounds like blank verse, melodic and rhythmic, but not a song or a poem or even a chant; its cadence and timbre is that of a dirge or prayer. He is acknowledging the creatures of the environment, the trees, the birds, animals, and insects, all those that live in this domain.

It’s a reminder that in Maori mythology Tane Mahuta, one of six children of Ranginui ‘the Sky Father’ and Papatuanuku ‘the Earth Mother’ broke his parents’ close and loving embrace by pushing them apart to let light into the world.

He pushed his father high in- to the sky, and clothed his mother with vegetation. The birds and the trees of the forest are regarded as Tane’s children.

Koro got the idea for his business while walking out of the Waipoua Forest one night as the light faded. He and some mates had been puzzling over how to get visitors to pay for an experience – coming into the forest to see the big kauri trees when they could just walk in from the road for free.

Then it hit them; they could add value by doing the journey in the evening, by telling visitors the Maori stories around the trees, and by picking up and delivering the visitors.

Footprints Waipoua is now one of a number of Maori tourism operators in Northland successfully selling cultural experiences.

The male fertilises the female pod, which expands then explodes.

Its tiny seeds with wings are spread by the wind. In the night we look at a seedling about 6cm high, about three to five years old. Koro reels off another of his aphorisms: “Despite being small you are of great value. Everything has a beginning.”

A lone Tui sings as we walk. It’s the last day bird before the night chorus starts. In the distance, a male kiwi lets out its distinctive cry, and our group pauses to listen, but the sound is drowned out by the louder and closer Tui.

Later we hear the Ruru, or owl, with its “morepork” cry. It is eerie but unthreatening, even though darkness has fully enveloped the forest. We meet the father of the forest, Te Matua Ngahere, the oldest and the second largest kauri.

Kauri are found only from south of Auckland to the north of the North Island, although the New Zealand species has 22 cousins across the Pacific, including in Australia. In the 19th century most Northland kauri trees were cut down for timber to build ships and houses, and their gum was harvested and used in resins and polishes.

The trees of Waipoua survived because there was no river nearby to float the logs down, hence they were never cut.

By day the trees and forest are awe-inspiring. It’s a different and better experience at night.

Our group stands in a silent salute to the big tree. Torches back on we file quietly and reverently back to the road where our van sits waiting for us.

Memphis, the biggest city in Tennessee, epitomises the old and new South of the … END_OF_DOCUMENT_TOKEN_TO_BE_REPLACED

John Bishop is an experienced and widely published travel writer and broadcaster with a long career in journalism and public relations. His travel stories have been published in Stuff Travel, the New Zealand Herald, and in LawTalk (the journal of the NZ Law Society), by the apn chain of newspapers in Queensland, Australia, and by Rotary DownUnder, (the monthly journal of the Rotary movement in Australia, NZ and the Pacific). He has also broadcast his experiences in the Odyssey segment of Nights with Bryan Crump on Radio New Zealand. … END_OF_DOCUMENT_TOKEN_TO_BE_REPLACED