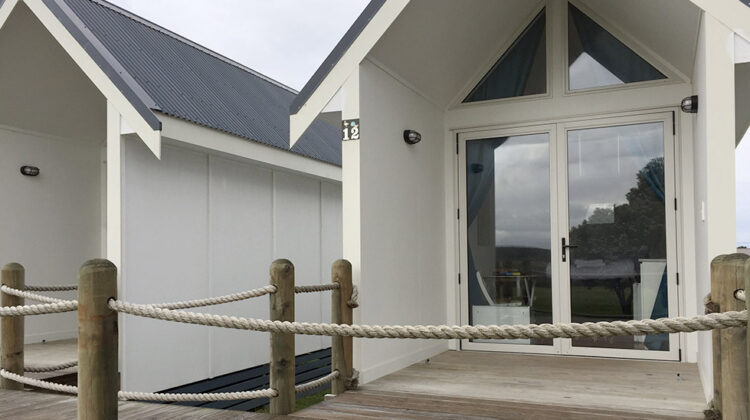 Families, couples, and the few remaining international visitors still in New Zealand are flocking to holiday parks around the country to take advantage of reasonably priced accommodation in attractive scenic areas.

A migrant from Baden-Baden in south-west Germany in 1995, he’s been surprised and “very encouraged” by the increase in volume in the domestic market. “June, July, August have been 100 per cent above last year”.

Up the road at Himatangi, most of the business for Reuben and Alice Emery is camping and caravans, but they have noticed an increase in demand for fixed accommodation since the Covid-19 restrictions ended. They’ve added a couple of motel-like units and may add more.

In Whanganui, Ben Kay and Jeanie Marshall, an English couple who migrated to New Zealand nine years ago, also see a trend towards holiday parks and to self-contained units and motels on-site.

“Mostly it’s one or two-night stays, and up to a week over the holiday periods. We have tried 5pm checkouts on Sundays to encourage longer stays, anything to make the stay a better experience’.’

At the Holiday Parks Association, an industry body representing 270 of the approximately 400-holiday parks in New Zealand, Chief Executive Fergus Brown says members all over the country have noticed an uptick in domestic business now that international travellers are almost entirely absent.

‘At first, we thought it might just be pent-up demand built over the periods of lockdown when we couldn’t travel, but we have found that it is bigger than that. Some holiday parks have had their best months ever;’ he said.

Holidays parks have outperformed other forms of accommodation like hotels and motels.

In September, total domestic nights (including stays in isolation hotels) increased by 20 per cent over the previous September’. but nights in holiday parks went up by 32 per cent.

In Northland nights in holiday parks leapt by 95 per cent in September, double the over-all increase 46 per cent.

In Taupo the figures were 186 per cent and 45 per cent and in the Bay of Plenty 139 per cent and 28 per cent. Holiday parks in traditional holiday spots like Queenstown and Marlborough didn’t do as well.

“New Zealanders are hunting out holiday parks and not just in the school holidays,’ Mr Brown said. “People are wanting to get away and not just on weekends”

“We are seeing groups of women, for example, taking a road trip together, and couples who are free to travel taking a few days off to explore their own region or the one next door’.’

In July, Tourism New Zealand released the results of research into New Zealanders’ attitudes to travel in their own country.

The study found that 64 per cent of Kiwis were planning to holiday within New Zealand in the next 12 months, rising to 70 per cent in the 30- 49 age group, the main family grouping.

Main reasons for wanting to travel domestically were to support the economy (64%), to see more of the country (56%), to go where they hadn’t been (55%), and as a substitute for overseas travel (50%). And Kiwis wanted to go outside their own region (90%), otherwise, it didn’t feel like a real holiday.

The experience of the Emerys at Himatangi is typical. “People come here to get away from it all, for the serenity. People relax, ride bikes, go to the beach and walk:’ Reuben said.

Uwe Kroll says; “The west coast beaches (like Foxton) are some of the best you can get for natural beauty; the driftwood is fantastic and the beach itself is stunning and reasonably safe, with beautiful sunsets. People come and unwind and relax:’

At Whanganui, it is more about the charm and delights of the city for Ben and Jeanie, although family fun time is important.

Fergus Brown says holiday parks offer a wide range of accommodation types. Across the country, there were 31,000 places for tents and caravans, but also 2500 cabins and over 2000 self-contained units of which about 1500 were motel units and about 700 were flats.

“It’s often difficult to tell the difference between a self-contained flat and a motel: the essential point is that they all have kitchens and en suite bathrooms.

“We have found that there is a growing market in people who want a reasonable standard of accommodation, but don’t want luxury, because they’d sooner spend their money on a good meal, or on a visit to a vineyard or a glamourous or exciting experience:’

Meanwhile, many holiday park operators are enhancing their properties to take advantage of the holiday-at-home trend by providing more self-contained units, installing more facilities for kids, and doing more promotion.

John’s tour was supported by the Holidays Parks’ Association.

Travelling’s easier when people go out of their way to help. Three incidents … END_OF_DOCUMENT_TOKEN_TO_BE_REPLACED

John Bishop is an experienced and widely published travel writer and broadcaster with a long career in journalism and public relations. His travel stories have been published in Stuff Travel, the New Zealand Herald, and in LawTalk (the journal of the NZ Law Society), by the apn chain of newspapers in Queensland, Australia, and by Rotary DownUnder, (the monthly journal of the Rotary movement in Australia, NZ and the Pacific). He has also broadcast his experiences in the Odyssey segment of Nights with Bryan Crump on Radio New Zealand. … END_OF_DOCUMENT_TOKEN_TO_BE_REPLACED