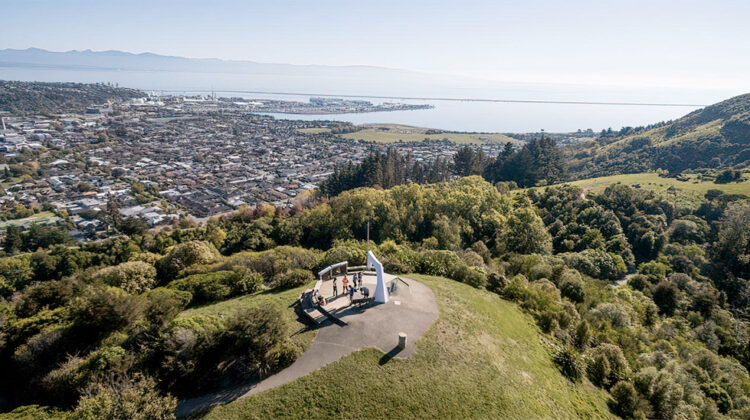 Promotional material aimed at domestic and international tourists says the centre of New Zealand is up a hill in the centre of Nelson City with a commanding view of the Nelson Tasman area.

It is sort of true, and information on the Nelson City Council’s sites both back and qualify the claims.

That’s the true part. I noted that it did not say “geographical centre” although a casual reader might well infer that.

There is no doubt that it is a nice walk up. Rated as “easy” but noting it may take between 20 minutes and 60 minutes depending on age and fitness, the view is spectacular.

The city’s council’s site adds: “At the summit, a monument (built in 1968) marks the surveyed trig point and a lookout platform hosts information panels and seating. Enjoy the great views over the central city, Tasman Bay, and inland up the Maitai Valley.”

Later it says, “note that Botanical Hill is not the actual ‘centre’ of New Zealand. Given its prominence and location next to the city centre, the top of the hill was used as a starting point for trigonometrical surveys by Chief Surveyor of Nelson, John Spence Browning in the 1870s”.

The council’s Parks and Recreation Department admits it is not the centre of New Zealand but explains where that is.

“In 1962 the Department of Scientific and Industrial Research conducted a gravity survey that took in Stewart Island, the North and South Islands, and the smaller inshore islands, but not the Chathams. This survey located the centre of New Zealand at 41deg. 30min S., 172deg. 50min E., which is a point in the Spooners Range in the Golden Downs Forest.”

Golden Downs Forest is a farming settlement 23kms south-west of Wakefield on SH 6 heading from Nelson to Murchison, quite a distance away from the city and its “centre of New Zealand”.

Nelson is also well known for being the site of the first rugby game in New Zealand in 1870. It was between the School (Nelson College) and the Town who won by two goals to nil with 18 players on each side including three halfbacks. The game has evolved a bit since then.

Those with an interest in the history of the place should take in Founders’ Heritage Park which has some worthwhile displays, although I thought they needed a good deal of attention to lift them to a modern standard of presentation and explanation.

An old Bristol Freighter, one of the noisiest plans ever to fly, is interesting. Safe Air, once a subsidiary of NZ Railways but then sold to the national carrier, used them (and other aircraft) to carry freight across Cook Strait from 1950 to 1983.

Also of interest is the display by Newman’s Coaches, which started in Nelson and operated all over the country carrying locals and tourists until it was folded into the Intercity Group in 1998.

Jack Newman (later Sir Jack) was one of the giants of the early tourist industry. He took a small company operating with horses and built Newman’s Coach Lines into one of the biggest coach tour operators in the country.

Nelson was also famous for having one of the iconic cafes of New Zealand – Chez Eelco operating from just below the Cathedral in Trafalgar Street.

Eelco Boswijk was a Dutch immigrant who after working in mainly manual jobs in New Zealand since coming here in 1952, opened his cafe in 1961.

It was an immediate success and was famous as an artistic centre, and as a meeting point for international visitors, particularly backpackers. Its signature dish was mussel chowder, made or supervised by Eelco himself.

He died in 2013 aged 84, having retired from the business in 2000. His daughter sold it in 2002 and it is now Harry’s Hawker House, a nice place but unrecognisable from the previous “Chez” as it was known locally.

The area below the cathedral is now a dedicated cafe and restaurant area which is closed to traffic. Chez Eelco was the first in Nelson to have outdoor seating. Now all the places have it, and as an eating and drinking locale the place hums.

Memphis, the biggest city in Tennessee, epitomises the old and new South of the … END_OF_DOCUMENT_TOKEN_TO_BE_REPLACED

Lyon is a gem of a city. Set on a hilly site, it's where the Rhône and Saône … END_OF_DOCUMENT_TOKEN_TO_BE_REPLACED

John Bishop is an experienced and widely published travel writer and broadcaster with a long career in journalism and public relations. His travel stories have been published in Stuff Travel, the New Zealand Herald, and in LawTalk (the journal of the NZ Law Society), by the apn chain of newspapers in Queensland, Australia, and by Rotary DownUnder, (the monthly journal of the Rotary movement in Australia, NZ and the Pacific). He has also broadcast his experiences in the Odyssey segment of Nights with Bryan Crump on Radio New Zealand. … END_OF_DOCUMENT_TOKEN_TO_BE_REPLACED