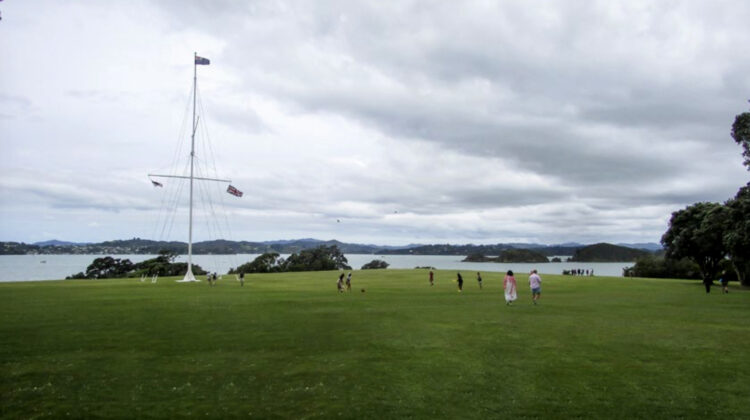 Touring around the north of Northland is a step back into our earliest history, both European and Māori. It is the story of how the races met and interacted, of colonial days, development, hardship, conflict and strife – all the factors that shape the north as we find it today.

Our group travelled by road from Auckland to Whangarei, but the trip really began in Paihia and Russell, where a visit to the Duke of Marlborough Hotel is almost compulsory when one is in this part of the world.

Fortunately, the sun shone as we sat on the veranda of the hotel and listened to Hone Mihaka tell his version of history after Europeans started arriving in serious numbers from about 1820 onwards. Hone is the nephew of the redoubtable Dun Mihaka who has grabbed a few headlines in his time for protest actions including baring his buttocks to the Queen when she was on a visit to New Zealand. He’s a Māori sovereigntist and would prefer to see the 1835 Declaration of Independence of the United Tribes of New Zealand as the founding document of New Zealand rather than the 1840 Treaty of Waitangi.

In 1835, concerned about lawlessness and strife between Māori and Europeans, a group of northern tribes met and declared themselves to be the government of the nation of Aotearoa. They sought recognition from King William IV for their actions but none came, and instead the Colonial Office sent Captain Hobson to negotiate what would become the Treaty of Waitangi.

The appeal of the 1835 Declaration in a modern political context is that, unlike the Treaty of Waitangi with its disputes over what was said and what was intended, the terms of the Declaration are unambiguous. Sovereignty was claimed by Māori and was not ceded in any form. This enables modern activists to argue that Crown–Māori relations should not be a partnership (as the Treaty is now interpreted) but as an arrangement between two separate nations. In short: Māori should govern themselves with no interference from Wellington (or Auckland).

Mihaka’s view is clearly not the view of all Māori in the far north, but it was an instructive and entertaining view of the world.

Dun and his partner run Taiamai Tours, and their half-day waka experience with some cultural immersion is an awesome experience, particularly for those who don’t know much about Māori culture.

Our group joined a party of Dutch tourists from a cruise ship who were just blown away by paddling their own waka up the river, and then going through the ceremony of being challenged and admitted onto the marae. As fearsome a challenge as I have ever seen was laid down by a semi-naked and highly tattooed Māori warrior armed with a club and a hatchet – full-on and intimidating. A very authentic experience, and one the Dutch party won’t forget in a hurry.

Talking of waka, a highlight of the journey was visiting the waka school at Awanui where both traditional navigation and the process of making and carving a waka are taught under the auspices of the Māori Arts and Crafts Institute. We also had the great honour of meeting Hector Busby, now aged 85, who is acknowledged as the father of the revival of waka building in New Zealand. In 1992 he skippered the first waka to undertake the journey from New Zealand to Rarotonga – that was Te Aurere.

The school also teaches traditional navigation using the sun and the stars to find one’s way across the oceans (‘wave finding’ as it is sometimes called). It’s how Māori found their way around parts of the world – from Hawaii through Polynesia to New Zealand.

John Panopo, who runs the school, says the bigger picture is to use waka to tell the Māori cultural story: “It’s about more than what you see at Rotorua.”

“It’s fantastic for the young people – many from tough backgrounds – to come here and to learn that our ancestors did great things. The greatest satisfaction is seeing the young people come out with a sense of identity; they realise that in their past they have heroes. They learn a set of values that they can live by when they come to understand that they have 2000 years of history, which psychologically gives them a turangawaewae – a place to stand,” John says.

We were guided by Koro Carman, founder of Footprints Waipoua, a tour operator which takes visitors into the forest at dusk and exposes them to the Māori creation stories while walking through the forest in darkness. Wide easy walking tracks, a warm jacket and bright torches aside, it is still a mystical experience.

Just take a moment, says Koro and we stand in the complete darkness, torches off, in total silence, unmoving in the still night air, the colour of the forest barely distinguishable from the starless sky, the only sound the slow wind in the high canopy moving the branches just a bit.

A few minutes later, Koro’s deep male voice shatters the mood with a loud burst of Māori. He is acknowledging the creatures of the environment: the trees, the birds, animals, and insects, all those who live in this domain. It’s a reminder that in Māori mythology Tāne Mahuta, one of six children of Ranginui ‘the Sky Father’ and Papatuanuku ‘the Earth Mother’, broke his parents close and loving embrace by pushing them apart to let light into the world.

Kauri are found only from south of Auckland to the north of the North Island, although the New Zealand species has 22 cousins across the Pacific, including in Australia.

The trees of Waipoua survived because there was no river nearby to float the logs down, hence they were never cut. Just a short journey to the north is Awapuni, where the local iwi has taken charge of what used to be called Kauri Unearthed. Now known as Ka Uri, the Ngati Kuri iwi are determined to preserve knowledge by teaching their people how to treat and carve kauri. This is no ordinary kauri. It is the swamp kauri that has been buried for up to 2500 years, and at their own factory and school it is being treated, polished and turned into high-class items worth hundreds and even thousands of dollars.

Asian tourists are keen to own something old, beautiful and unique. A freestanding piece of polished kauri about 1.5 metres high shaped like the fang of a monster animal, will go for $2500. Smaller items blocks and the like – can be bought for under $30.

At the Kauri Museum at Matakohe, I learned about being ‘in the pits’. Sawing logs into planks was done by two men, one on top of the log and one underneath, and they pulled the saw backwards and forwards in a straight line down the length of the log. The man on top was pushing down, while the guy underneath was pushing up and getting all the sawdust coming down into his face and clothes. He was said to be ‘in the pits’.

Heading back to Auckland our van stopped in Riwaka, a town of no notable distinction, except that there we saw a person in a traditional Four Square uniform. Four Square stores are quite common, but this lad was fully disguised as the Four Square man and was helping an old lady to her car with her groceries.

“Were there many applicants for the job?” I asked cheekily. “I was the only one,” the voice inside the costume said with resignation. That’s what it’s like in the far north.

Lyon is a gem of a city. Set on a hilly site, it's where the Rhône and Saône … END_OF_DOCUMENT_TOKEN_TO_BE_REPLACED

Travelling’s easier when people go out of their way to help. Three incidents … END_OF_DOCUMENT_TOKEN_TO_BE_REPLACED

John Bishop is an experienced and widely published travel writer and broadcaster with a long career in journalism and public relations. His travel stories have been published in Stuff Travel, the New Zealand Herald, and in LawTalk (the journal of the NZ Law Society), by the apn chain of newspapers in Queensland, Australia, and by Rotary DownUnder, (the monthly journal of the Rotary movement in Australia, NZ and the Pacific). He has also broadcast his experiences in the Odyssey segment of Nights with Bryan Crump on Radio New Zealand. … END_OF_DOCUMENT_TOKEN_TO_BE_REPLACED