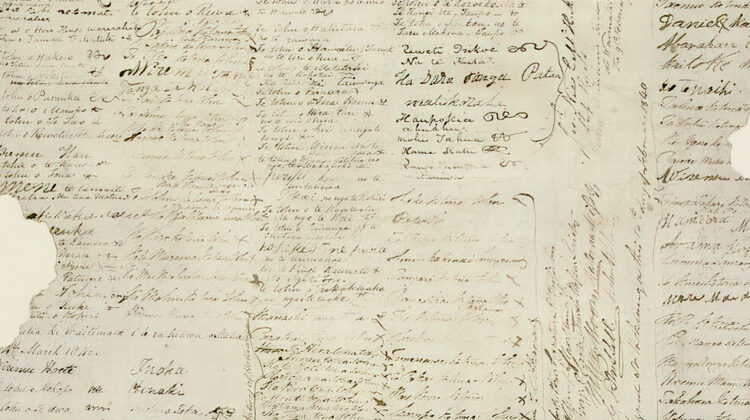 With Waitangi Day on 6 February, some attention will focus on the status and relevance of the Treaty of Waitangi in modern times, and on whether it is the founding document of our country.

Some claim that the 1835 Declaration of Independence of the United Tribes of New Zealand is a better model for relations between Māori and other New Zealanders. John Bishop uncovered some widely differing viewpoints when he travelled to Northland recently.

On 28 October 1835 the leaders of 34 northern tribes assembled at Waitangi.

For more than 20 years Māori had been interacting with Europeans – with missionaries, whalers, sealers, traders and land buyers among others. At the time lawlessness, particularly among British subjects, in and around the Bay of Islands was a serious problem.

There was no authority to enforce order. No country had claimed New Zealand, although several, including France and Great Britain, were active in the area.

Interest in the idea of Māori government was strong among the Māori leaders of the time. Māori were active international traders; some leaders had been to New South Wales and others to England. They began to speak of unifying the tribes and forming a Māori government.

Under the guidance of the British Resident, James Busby, who helped to draw up the document, the tribal leaders met, agreed and signed a Declaration of Independence of the United Tribes of New Zealand (He Whakaputanga o te Rangatiratanga o Nu Tireni).

Subsequently the document was sent to the Colonial Office in London. The Colonial Office wasn’t pleased or impressed. The tribes had asked for the King’s agreement to act as protector of the new state. He didn’t oblige.

Officials decided a new policy towards New Zealand was needed. That policy emerged as proposals for a treaty, which was subse-quently negotiated at Waitangi.

The 1835 document was signed initially by 34 leaders and by 1839 there were an extra 18 signatures. But it was never given an official status – at least not in English eyes. And the signatures covered tribes only from the Manukau north.

Yet in Northland today, there is frequently discussion about the declaration; the flag is flown as a symbol of Māori independence. It even appeared as a nomination in the 2015/16 flag referendum.

The magic word “independence” in the 1835 Declaration has appeal to sovereignty activists and the disaffected.

Wikipedia on the 1835 Declaration notes “the first stage of the report (on the Ngāpuhi claim) was released in November 2014, and found that Māori chiefs never agreed to give up their sovereignty when they signed the Treaty of Waitangi in 1840. (And there is no suggestion it was ceded in 1835; quite the contrary.)

Tribunal manager Julie Tangaere is quoted as saying to the Ngāpuhi claimants at the report’s release: “Your tupuna [ancestors] did not give away their mana at Waitangi, at Waimate, at Mangungu. They did not cede their sovereignty. This is the truth you have been waiting a long time to hear.”

And if sovereignty was not ceded, then it is possible for Māori to argue not for partnership with the Crown, but for independence, self-government and self-determination, instead of cash, land, and an apology for past transgressions.

Standing on Flagstaff Hill above Russell, where Hōne Heke chopped down the flagpole, prominent Northland local Hōne Mihaka (nephew of the famed activist Dun Mihaka) tells me, “my view is that we should go back to the 1835 Declaration. A majority of people around the Bay of Islands didn’t want the Treaty of Waitangi then, and they still don’t.”

Questions about the meaning of the Treaty of Waitangi abound. What, if anything, did the Māori signatories “give up” when they signed the Treaty?

Likewise, what did the Crown’s representatives and the chiefs themselves understand about what they were doing, and were these understandings the same?

It’s a fertile field for academic and political debate, legal actions, internecine argument, honest disagreement, opportunism, grand-standing and mischief making. There’s been plenty of all of those over the last 50-plus years.

The 1835 Declaration avoids all this: the chiefs gave away nothing.

Rather they asserted their own independence, self-government, and law-making ability: precisely the aims of the modern separatists among Māoridom.

There is no need for a partnership between Crown and Māori (as the Treaty, the courts and most authorities now posit). Māori can claim to be self-governing on the basis of the 1835 Declaration.

Former Attorney-General and Treaty Negotiations Minister Christopher Finlayson dismisses the Declaration entirely. “It is just a nullity,” he says.

According to NewZealand history, “the handwritten document consisting of four articles asserted that mana (authority) and sovereign power in New Zealand resided fully with Māori, and that foreigners would not be allowed to make laws.

A Council, Te Whakaminenga, the Confederation of United Tribes, was to meet at Waitangi each autumn to frame laws, and in return for their protection of British subjects in their territory, they sought King William’s protection against threats to their mana.

They also thanked the King for acknowledging their flag, “under which they traded as British flagged vessels”. (This was important because cargo in non British flagged ships attracted higher customs duties in Australian ports.)

By declaring independence, Māori were saying this is a separate country, and Māori were in control.

The problems with the document begin with its status. It is a declaration, and declarations are worth only the status that other parties are prepared to give to them.

In the United States the Declaration of Independence has immense and acknowledged status, because recognition was forced by victory in the War of Independence.

The Treaty of Waitangi is a treaty between two parties. Certainly, there is debate about the intentions of the respective parties at the time, the meaning of various terms and the contemporary relevance of the Treaty.

In government Mr Finlayson and his officials spent a long time trying to get the Ngāpuhi claim to the negotiating table. Progress was continually frustrated by intra-tribal arguments about representation, and in this context the 1835 declaration is advanced by people like Hone Mihaka as a better model for Māori/Pākehā relations in modern times.

“I do get grumpy with Ngāpuhi about this arid discussion,” says Mr Finlayson. “The young people in Kaikohe aren’t interested in what happened in 1835. They want jobs, education and opportunities. The 1835 stuff is being peddled by third raters.”

Te Ururoa Flavell, the former co-leader of the Māori Party told me that as far as he was concerned the 1835 Declaration was “something for the fellas up north,” and had no relevance to him or his people.

Historian Dr Michael Bassett, who was a member of the Waitangi Tribunal for a period, points out that “arguing that 1835 takes precedence is, of course, a direct assault on the primacy of the Treaty.”

He too thinks that the revival of interest in the 1835 Declaration is about intra-tribal politics. “The people promoting it seem to be some of those who have been pushed to the outer by both the Waitangi Tribunal and the Government as efforts are made to bring about a resolution to Ngāpuhi’s claims.“

There are some bad, congenitally disputatious people up there who, in the worst of Māori traditions, are more intent on settling ancient hapu/tribal scores than they are in moving on into the future with their settlement money and charting a future for their people.”

There is one final argument: whatever status the 1835 Declaration might have had, legal authorities and historians say this was extinguished by the establishment of the Treaty of Waitangi. Many chiefs signed both, but only the Treaty binds the Crown.

And in turn this means, as Christopher Finlayson puts it, “there is no question about who holds jurisdiction in and over New Zealand and it ain’t Ngāpuhi. The Crown has sole sovereignty. Māori have rights and interests, but it is for the Crown to regulate.”

Travelling’s easier when people go out of their way to help. Three incidents … END_OF_DOCUMENT_TOKEN_TO_BE_REPLACED

Lyon is a gem of a city. Set on a hilly site, it's where the Rhône and Saône … END_OF_DOCUMENT_TOKEN_TO_BE_REPLACED

John Bishop is an experienced and widely published travel writer and broadcaster with a long career in journalism and public relations. His travel stories have been published in Stuff Travel, the New Zealand Herald, and in LawTalk (the journal of the NZ Law Society), by the apn chain of newspapers in Queensland, Australia, and by Rotary DownUnder, (the monthly journal of the Rotary movement in Australia, NZ and the Pacific). He has also broadcast his experiences in the Odyssey segment of Nights with Bryan Crump on Radio New Zealand. … END_OF_DOCUMENT_TOKEN_TO_BE_REPLACED