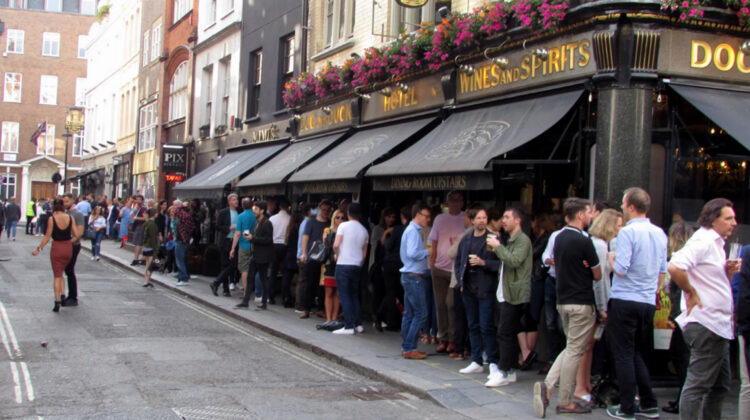 Each of the London food tours I chose varied widely in price and content. Deliberately so, because I wanted a range of experiences, and because I was determined to try free stuff (although, of course, it wasn’t actually free at all).

Top of the line was a twilight food and cocktail tour of Soho which I undertook on a Friday night. At £95 this was the most expensive, but it was also the best. The guide was the most knowledgeable and professional of the three I had. The food was the best, and most importantly it took me to places that I would not have found easily by myself.

The cheapest was a walking tour of Camden Town. This was less about food than about music, the counter culture and nostalgia. This is Amy Winehouse country and I happily drank in the pub where she sang, and often drank. I rated this second. It was supposedly free, although the blurb said participants were free to pay the guide what they though the tour was worth. I handed over £15, while others seemed to be a little less generous.

The disappointing one was a £63 walking tour of the London Bridge markets. There were plenty of samples and many of them were tasty too. But I couldn’t shake the feeling that I could have come here by myself and wandered around and got most of the samples anyway.

It is called the Traditional British Food Tour and is organised by Secret Food Tours, a company which operates tours in 15 cities around the world. It is neither particularly secret nor especially worth it.

That wasn’t the fault of Eddie the guide who was knowledgeable and entertaining.

The problem lies in the design of the tour. There is barely enough here worth paying for.

Most of the action centres on the Borough Market, one of the city’s oldest. A market has operated at or near there since 1016 and was rehoused under London Bridge in 1756.

It’s directly opposite the London Bridge Tube Station and very definitely open to the public.

The £63 fee presumably buys the various food samples and pays the guide.

We got a piece of Scotch egg, half a piece of fish and some chips (from London’s prize-winning fish and chip shop, an accolade which seemed wholly unmerited to many of us), a piece of pork pie (which was top class), samples of mead, some cider and three types of cheese in an old pub (all enjoyable), a top-class cream donut and then some tea or coffee to end the tour.

One delight – in the market but not part of the tour – was the Monmouth Café which served a wonderful flat white fully as good as the best in New Zealand.

A halfway competent traveller able to work the internet could have come to the market, taken the samples being offered by the stall holders, bought what was in our tour fee and still had change.

I’ve no objection to paying for added value; I’m just not sure where that was in this case.

At Camden Town I join eight others for a free guided walking tour (freetoursbyfoot.com).

This was a cracking good experience. Colin, the guide, loves Camden, though he is from Essex. He knows his stuff about the area, and he tells the stories in an engaging and interesting way. Nominally this is a free tour lasting about 2.5 hours. It took longer, not that anyone was complaining and we all paid him.

He talked knowledgeably and with affection about the origins of the area (navvies – mainly Irish – building the canals and then the railways), of its bohemian and then hippie status, of Amy Winehouse, of the various bands that began careers here (think Pogues, The Clash, Madness, Blur, Oasis, and earlier Led Zeppelin, Pink Floyd), and venues like the Roundhouse and Dingwalls where ex-Animal Chas Chandler built the longest bar in the world because he thought clubgoers were too often frustrated by not being able to get a drink.

The markets retain their alternative feel; T-shirts rule and at the Hawley Arms, where Amy Winehouse sang and drank, I down a glass in her memory. Her statue is in the market and her image is on many walls as a mural.

It wasn’t all music. George Orwell lived in Arlington House, then and now a refuge centre for those struggling in life. He’d been working at Maxim’s in Paris and retreated to Arlington House to write Down and Out in Paris and London. It was a home for the homeless, “one of the better ones” Orwell noted.

The Black Cap, a gay pub famous for its drag acts was here. In the 1970s the air was reckoned to be four parts oxygen and one part marijuana.

Oasis and Blur, before either was famous, drank together in The Good Mixer pub and then, when both were raving successes, argued about who was top dog and fell out irretrievably.

Soho was originally outside the walls of the city of London and in the 15th century was a hunting ground for the rich. The name apparently comes from a cry uttered by hunters chasing hares …. so there’s a hare.

Later manor houses were built and by the 18th century many immigrants were living there, outside the city walls, and seemingly beyond the jurisdiction of the city authorities. Gin palaces, brothels and gambling dens thrived. Later, bohemian elements came to the area, including musicians, and by the 1960s it was the centre of Britain’s sex industry.

Now it is a thriving and prosperous entertainment area, still with just a few sex shops, many pubs, cafes and restaurants, lots of very upmarket fashion stores, and still a few recording and media companies. (Carnaby Street is part of it; chic, elegant and expensive).

I bought a Twilight Soho Food and Cocktail Tour with Eating Europe Tours (operating in five European cities). At £95 (about $180) I was expecting a lot, and I certainly got it.

The night began with tequila cocktails served with lime, crushed ice and coconut, and then on to Minnie Dean’s pub (no connection to her Kiwi namesake) where we enjoy one of the best meat pies I have ever had washed down with a half of bitter.

On to Enrique Tomas in Wardour Street, a chain of Spanish bars where we are served three types of Spanish ham, three types of cheese and two wines, all with an informed commentary on taste and provenance sit-ting at a reserved pre-laid table.

Across the road and around the corner to a very swish tapas bar: help yourself to two tapas and move to a table at the rear where drinks are served. I enjoyed ham and a prawn on toast and a cup of gazpacho. We are among fashionable diners drinking, talking, sampling and admiring each other as the in-crowd does all around the world.

We pass the house in Dean Street where Karl Marx and his wife and family lived during their early days in London. Some of his children were born and died there.

It’s now an exclusive gentlemen’s retreat above a pub, opposite a strip club and by the famous De Lane Lea recording studio itself now owned by Warner Bros.

The highlight for me was a place called Opium in Gerrard Street, a bar and hospitality venue on three levels. We climbed the narrow stairs to the top floor to find an oriental style room and a relaxed cocktail table setting.

A cocktail of honey, tea and vermouth is served, along with dim sums, among the best ever; pork and shrimp, plus big prawns, and chicken, with dipping sauces of chilli, soy and Chinese vinegar. Absolutely fabulous tastes and textures, generous servings and nothing left behind.

Our last stop was a well-reviewed underground bar called Basement Sate in Broadwick Street where we are treated to a rich French chocolate dessert with a cocktail of tequila, aperol and sugar syrup topped with prosecco.

Over three hours, this was a top of the line experience, and while wildly self-indulgent, was worth the money for the quality of the company, the knowledge of the guide (Bethany, originally from the US but resident in London), and for the access to places which might have been found by accident, but likely not.

Price is a faithful though not an infallible guide, but beware of the overpriced and the mediocre. Pay for what you can’t get yourself; otherwise go the free route and tip when you are satisfied.

John Bishop is an experienced and widely published travel writer and broadcaster with a long career in journalism and public relations. His travel stories have been published in Stuff Travel, the New Zealand Herald, and in LawTalk (the journal of the NZ Law Society), by the apn chain of newspapers in Queensland, Australia, and by Rotary DownUnder, (the monthly journal of the Rotary movement in Australia, NZ and the Pacific). He has also broadcast his experiences in the Odyssey segment of Nights with Bryan Crump on Radio New Zealand. … END_OF_DOCUMENT_TOKEN_TO_BE_REPLACED