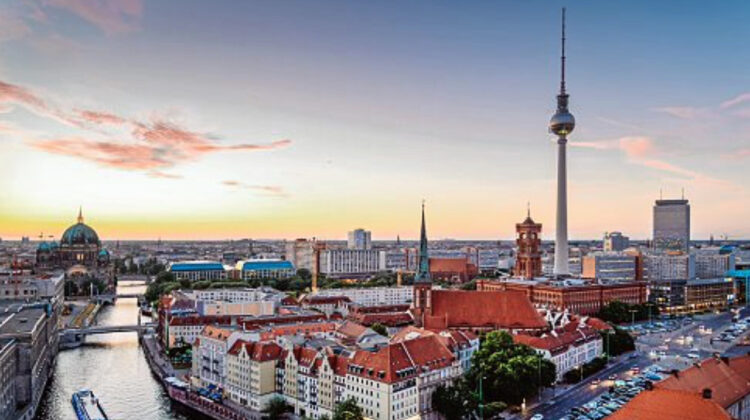 If there is one single thing that says Berlin, it has to be the Brandenburg Gate.

Opened in 1791 as a symbol of peace, the Brandenburg Gate has come to say Berlin in the same way as the Eiffel Tow- er says Paris, Big Ben says London and the Harbour Bridge says Sydney.

Its 12 Doric columns in a neo-classical design echo the gateway to the Acropolis in Athens. On top is a quadriga – a chariot pulled by four horses.

In a city lacking deeply im- pressive landmarks, the Brandenburg Gate is the best on offer. It is where the two of Berlin’s best streets meet: Unter den Linden, a tree-lined boulevard which the victorious troops of all regimes have marched in triumph, meets Ebertstrasse, once Berlin’s busiest but now full of modern office blocks.

The German Parliament is a block away. Likewise, the 2711 grey concrete slabs making up the Memorial to the Murdered Jews of Europe.

Ceremonies to mark the re- unification of Germany were held at the Gate in 1990. US Presidents Clinton and Obama have spoken there.

Conquerors have marched through; Napoleon after he crushed the Prussians at the battle of Jena in 1806. He took the quadriga to Paris as a trophy. It was returned after he was beaten at Waterloo.

The Nazis used the Gate as a symbol of a greater German past to sanctify their own cruel path, and in 1945 the Russians drove tanks through it in their conquest of Berlin.

During the Cold War the Gate was in East Berlin, with the Berlin Wall built just a few metres in front of it.

West Berliners could walk up to the wall and gaze into East Berlin through the Gate and wonder what had happened to their city and country.

On June 12, 1987 US President Reagan chose the Brandenburg Gate as the place to make his famous “Mr Gorbachev, tear down this wall” speech and, in 1989, when the Berlin Wall did come down, the Gate was one of the first places Berliners gathered to surge through to the other side.

Nowadays the street leading up to the Gate is awash with cafes including all the usual fast food suspects.

Backpackers and casual travellers congregate there to use their loos – which generally costs half a euro.

It ‘s also a common departure point for tour buses and walking groups exploring the city. The road in front of the Gate is now a pedestrian plaza and is a popular place to watch sports on big screens and see the fireworks at New Ye ar.

In 2014, the German football team had a victory rally there after winning the FIFA World Cup.

On the plaza is the Hotel Adlon. Lorenz Adlon, who built the original hotel on the site in 1907, was twice hit by motor vehicles coming through the central arch of the Gate, which had originally been reserved exclusively for the Kaiser. In 1921 the second crash killed him.

It was at the new Adlon that Michael Jackson very briefly dangled his nine-month-old baby son Blanket (Prince Michael Jackson II) out of a window of the presidential suite of the hotel on November 19, 2002 to the horror of the crowd assembled below.

He later apologised “I offer no excuses for what happened, I got caught up in the excitement of the moment. I would never intentionally endanger the lives of my children”.

Ironically, he was in Berlin to accept an award for his charity work on behalf of children.

Memphis, the biggest city in Tennessee, epitomises the old and new South of the … END_OF_DOCUMENT_TOKEN_TO_BE_REPLACED

Lyon is a gem of a city. Set on a hilly site, it's where the Rhône and Saône … END_OF_DOCUMENT_TOKEN_TO_BE_REPLACED

John Bishop is an experienced and widely published travel writer and broadcaster with a long career in journalism and public relations. His travel stories have been published in Stuff Travel, the New Zealand Herald, and in LawTalk (the journal of the NZ Law Society), by the apn chain of newspapers in Queensland, Australia, and by Rotary DownUnder, (the monthly journal of the Rotary movement in Australia, NZ and the Pacific). He has also broadcast his experiences in the Odyssey segment of Nights with Bryan Crump on Radio New Zealand. … END_OF_DOCUMENT_TOKEN_TO_BE_REPLACED