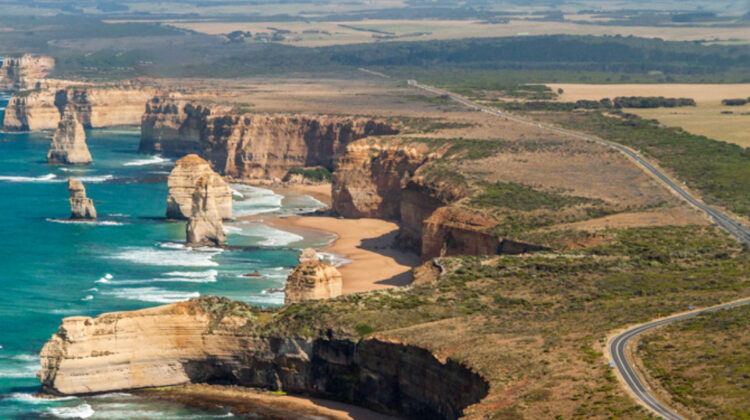 What’s in a name? In the case of the 12 Apostles – eight 50-metre columns of limestone off the southern coast of Victoria, Australia and the state’s single biggest tourist attraction – quite a bit of a mystery.

How did these majestic and much visited blocks of limestone near Campbelltown, the last stop on the Great Ocean Road southwest of Melbourne, get their name?

After all there were never twelve of them and they are pillars of limestone, carved out of the cliff face by the action of the ocean without any obvious biblical connection and lacking any religious significance.

An Englishman called George Bass sailing in the area between Melbourne and Adelaide discovered the limestone columns in January 1798 and named them the ‘The Sow and The Piglets’, according to both the Tourism Victoria website and the Wikipedia entry on the 12 Apostles. (It is most commonly transcribed in the many available descriptions as ‘12’ rather than ‘Twelve’).

I visited the 12 Apostles while travelling the Great Ocean Road last summer. I took four days to drive a big 600 km loop from Melbourne southwest to Geelong and then directly west to Camperdown, turning south to the coastal town of Port Campbell and then along the coast back to Geelong.

Cricket and bushfires not coronavirus were the topics du jour.

The apostles are a major feature on every itinerary for coach tours of the Great Ocean Road. Nearly three million visitors come here each year, including a million from overseas, making it the most visited attraction in Victoria and a top ten attraction for Australia as a whole.

I got intrigued by the name and the more I probed for answers about who, when and why, the greater the mystery seemed to grow. No one could answer what seemed on the face of it to be a simple question.

The website of Tourism Victoria, says: “When they were christened the 12 Apostles by Victorian tourism in the 1920s, there were only nine in the cluster.”

It adds, “they call the rock stacks the twelve apostles because they stand proud and tall along the shore. ”Until the 1960s, the area was nicknamed the Sow and Pigs, with the Muttonbird Island being the sow, and the limestone stacks being the pigs.

“For marketing purposes, they then coined the apostles, which slowly turned into the 12 Apostles (although you could only see nine at the time of the name).”

The identity of the mysterious “they” is not explained. And the dates given – 1920s and 1960s – are contradictory.

I asked Tourism Victoria for an explanation. Who named the 12 Apostles, when, and what was the reasoning behind the choice of that name?

They took a couple of weeks even to acknowledge my inquiry, then promised a swift response and in the end called back to say they had nothing.

Peter Younis, who is a vet in Port Campbell and President of the Heytesbury District Historical Society, acknowledges the local folklore that the name was changed in the 1920s for marketing reasons, although no one is specific about who made the decision and why the name ‘12 Apostles’ was chosen.

He told me he had looked into it himself but cannot and any solid evidence.

“There are no primary sources (that I could find). The most likely group to be promoting the change would be the Port Campbell Progress Association which was active pre- and post-World War II up to the 1990s. But there are no progress association records back that far (1920s and earlier).

“I’d like to know myself, but I don’t believe anyone can tell you de1nitively by citing primary sources.”

No treasure in the Trove

Peter referred me to Trove (the digitised record of Australian newspapers) and suggested I look at the Campbelltown Chronicle which was published from the 1870s until the mid 1940s.

In that journal I found an article from 1909 extolling the tourist virtues of the area which includes a specific reference to the 12 Apostles as a landmark worth visiting.

There is no reference to when or how the name change came about.

Peter’s own research had turned up some other clippings, notably one from another local newspaper, the Argus of 25 December 1897:“A singular formation is a line of tall rocks rising out of the sea, completely cut off from the mainland of sandstone, which runs sheer down to the water. These are known as the Sow and Pigs, the Pinnacles or the Twelve Apostles.”

He adds, “I believe that we can say that the use of the current name began some time prior to 1897 and probably between 1880 and 1897. I say that because there really was no signi1cant marketing of the place until at least 1880 and probably a little later. My own McKenzie ancestors arrived in 1872.

”The website of the Port Campbell Hostel quotes local historian Etty McKinnon, who believes the name “emerged sometime early in the 20th Century”.

“I’d love to know how the name change came about. On Governor La Trobe’s map dated 1846 they’re called the Sow and Piglets and these included a lot more than twelve stacks.

“It might have reflected the time when people were a bit more religious. There were other Biblical names around, too, like the Crown of Thorns and the Grotto.”

A current tourist brochure has this description of the 12 Apostles – wording which is repeated on many sites: “Local folklore suggests that because they seem to exude such power and awe, visitors can only stand in awe of nature and its creation, and hence the name’s biblical origins.

”Except that there is absolutely nothing to suggest any “biblical origins”.

Truly a remarkable example of marketing hype based on nothing but the writer’s fervid imagination and explaining nothing at all.

The research by the Heytesbury District Historical Society and my own searches show the name 12 Apostles was in use well before the 1920s, as local folklore has it and de1nitely before the 1960s as Victoria Tourism claims.

But who decided on the name, when and why remain unanswered.

The Great Ocean Road itself was built by returned soldiers between 1919 and 1932 but travel along the road by car became popular from the 1920s.

Nowadays its towns are over flowing with holidaymakers from Melbourne and beyond.

In December 1927 the Age (of Melbourne) newspaper carried a report praising the Great Ocean Road and the various towns along it, noting after Geelong “only a few miles further around the coast is Torquay, where, unrestricted by formalities, the tourist may lead the free and easy life in rest and comfort.

“The beauty of the coastline increases after passing Torquay, and the Ocean Road Trust has provided a beautiful winding drive, with steep, timbered hills on one side, and on the other the motorist looks down into the dashing waters of the Southern Ocean,” it said enthusiastically gushing about the attractions of the towns of Lorne, Torquay, Anglesea, Apollo Bay and Campbelltown.

The wreck of the Loch Ard

Also along the same coast is a much more compelling and truthful example of an event deserving admiration and respect.

Over six hundred ships have been lost along Victoria’s windy and stormy coast, pounded constantly by the Great Southern Ocean, although only about 240 of them have been located.

One of the most famous is the Loch Ard, a British cargo and passenger ship heading along Bass Strait for Melbourne when it hit an enveloping fog and crashed into the rocks, literally on a dark and stormy night.

The ship carrying settlers from Britain and Ireland was wrecked off the coast on the night of 1 June 1878 with just two survivors.

One of them was a 19-year-old apprentice called Tom Pearce who was washed ashore but hearing cries went back into the water to grab a young Eva Carmichael, an 18-year-old travelling with her Irish family.2e Royal Humane Society gave him their 1rst Gold Medal for bravery. The other 52 passengers and crew, including six more Carmichaels, perished.

Only six bodies were ever recovered.

Their graves and other memorial stones lie in a graveyard above the gorge in silent testimony to the power of nature in these parts.

Tom and Eva got a civic reception in Melbourne and there was speculation the pair might marry, but Eva returned to Ireland and never saw him again. He became a ship’s captain and died on his travels aged 49.

Memphis, the biggest city in Tennessee, epitomises the old and new South of the … END_OF_DOCUMENT_TOKEN_TO_BE_REPLACED

John Bishop is an experienced and widely published travel writer and broadcaster with a long career in journalism and public relations. His travel stories have been published in Stuff Travel, the New Zealand Herald, and in LawTalk (the journal of the NZ Law Society), by the apn chain of newspapers in Queensland, Australia, and by Rotary DownUnder, (the monthly journal of the Rotary movement in Australia, NZ and the Pacific). He has also broadcast his experiences in the Odyssey segment of Nights with Bryan Crump on Radio New Zealand. … END_OF_DOCUMENT_TOKEN_TO_BE_REPLACED