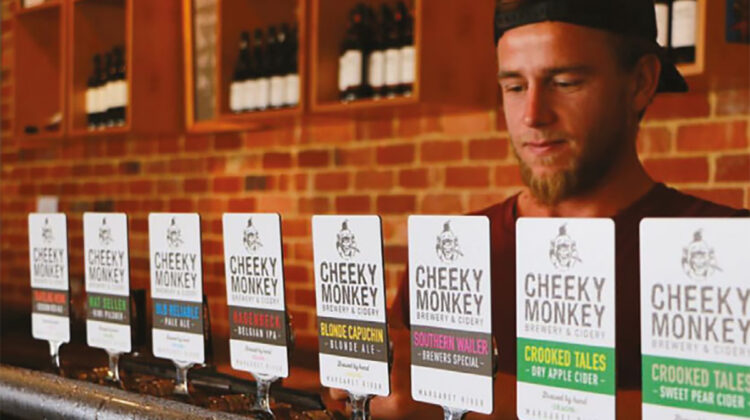 Just three hours south of Perth, the wine and food attractions of this prized pocket of Western Australia is largely centred around the township of Margaret River. Certainly, most of the good wineries, the beaches, breweries, galleries, glassworks, and the olive oil, cheese and chocolate establishments are an easy driving distance from the township itself.

Caves Road, west of the town, runs north to south paralleling the coast. A local map from the Information Centre

has all the places of interest marked. The towns of Bunbury, Busselton and Margaret River are Perth’s weekend and summertime playgrounds, and many Perthites come down for weekends or maintain a holiday home somewhere along the coast.

Wine was the main reason for our visit. The history of wine in south west WA is all very recent. In 1965, scientist Dr John Gladstone recognised that the characteristics of the soil and climate were very similar to those of the Bordeaux region. In 1967, Dr John Cullity planted the first vines at Vasse Felix. People sat up and took notice after a Vasse Felix Riesling won a gold medal at the Perth Wine Show in 1972.

Planting in the region took off, and in 2005 Leeuwin had its Chardonnay judged as the fifth best in the world. (It’s still available at the vineyard and is drinking beautifully.)

Nowadays the region produces a quarter of Australia’s wine and is best known for two blends: Semillon/Sauvignon Blanc (SSB in local wine parlance) and Cabernet Sauvignon/Merlot. The quality of the local Chardonnay and Shiraz is also impressive.

There are two very enjoyable features of the wineries. The major producers make a big thing of their gardens and hospitality areas. Laurence has statues and water features. Leeuwin has vast lawns where they host concerts by major popular artists, such as Mariah Carey.

The second feature is the food.

The major wineries have first-class restaurants and often more informal cafés as well. Lunch at Voyager and Leeuwin feature in the classier winery tours.

We lunched at Voyager (bread with dukkha, with a choice of mains and coffee; the beef was exceptional). We enjoyed a flight of six wines and part of the deal is that guests can pick one of those to accompany their lunch.

But there’s a lot more to the area than just wine. The Cheeky Monkey, an indoor/outdoor restaurant and café on Caves Road, is a brewery and cidery and sells its own products onsite for consumption and takeaway.

Gabriel’s Chocolate specialises in single-source chocolate, which means that all the cocoa beans in any bar of chocolate come from the same country, be it Venezuela, Peru, Ghana or another country.

Crack open the nut and taste the bean smashed up, noting its rather sharp, acrid taste. Then move on to the various samples laid out on plates, from least to most sweet. Sweetness is purely a function of how much sugar is added, the helpful guide tells me.

Margaret River Venison is a standard stop on most tours. It’s stop, see, smell, taste (a few times), buy and go. We were impressed by their chilli venison and their venison pate, and ended up buying a pack of venison prosciutto. This is delicious, thinly sliced, flavoursome, melt-in-the-mouth stuff.

Olio Bellow claims to be Australia’s most awarded certified organic extra virgin olive oil manufacturer. In the tasting room, visitors can sample 14 varieties of olive oil, from the pure to the fruit blended to infused varieties.

The baskets of cut-up bread just kept on coming. After that, move on to the gourmet deli lines: dukkha, tapenade, chutneys, pickles and the like. The chilli mixture has a good after-burn and the harissa is well up there, too. The place has 10,000 olive trees under cultivation and according to Robyn, the manager, organic is both a point of difference valued by customers and a philosophy inherited from the founder of the place (now deceased).

There is a café, rainwater on tap and organic skin and body care products.

At Bettenay’s, sample the wine and eat homemade nougat. This family run business is on the itinerary of many of the local tours. They make nougats on the premises according to traditional methods. There are 27 different flavour combinations and they don’t mind handing out the samples generously.

The most impressive thing about the Margaret River Dairy Factory was the onion jam. The milder cheeses and the brie were nice, but it was the strong cheddar and the smoked cheese that kept me plunging my toothpick downwards into the bowl and then upwards into the mouth. The jam was a wonderful accompaniment.

Rotary is active in the area, too. At Busselton – the largest town in the region, which is also famous for its nearly two-kilometre-long jetty – local Rotarians have sponsored an impressive park.

Likewise, in Margaret River itself, there is a Rotary Park on the northern edge of town, complete with a train line and engine in a shed.

If you are planning to come here, be careful about the beaches and the sharks. The beaches along the coast attract experienced surfers and sharks – although attacks are infrequent. On the coast at Gracetown there is a memorial to Chris Boyd, a local surfing legend who was “taken by a shark” in 2013.

Families should stick close to the gentler surrounds of the beaches in the towns like Busselton and Dunsborough, where sandy beaches slope gradually into gentle waves.

John Bishop is an experienced and widely published travel writer and broadcaster with a long career in journalism and public relations. His travel stories have been published in Stuff Travel, the New Zealand Herald, and in LawTalk (the journal of the NZ Law Society), by the apn chain of newspapers in Queensland, Australia, and by Rotary DownUnder, (the monthly journal of the Rotary movement in Australia, NZ and the Pacific). He has also broadcast his experiences in the Odyssey segment of Nights with Bryan Crump on Radio New Zealand. … END_OF_DOCUMENT_TOKEN_TO_BE_REPLACED